Smartphone apps such as NINA and KATWARN are supposed to warn us in the case of natural catastrophes or terror attacks. But how reliable are they? And how do they work? Here are some answers. 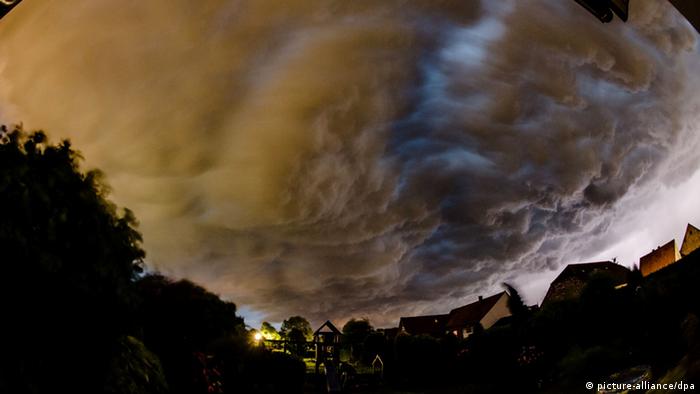 Chaos on the streets, people running around without orientation - some looking for relatives. During the rampage in the German city of Munich last weekend, the warning app KATWARN was able to help some people. It informed them about the current dangers and directed them away from affected places.

However, the warning system was not prepared for the huge number of requests and for some time was simply unavailable. Just in a dangerous situation, when thousands of people need reliable information, this should not have happened.

How does KATWARN work?

KATWARN is a general warning system. That means, it is supposed to inform and advise people in case of a broad range of dangers, such as extreme weather situations, large fires, chemical spills or shootings. Citizens receive their information through SMS, e-mail or through push messages from an app. The information can be provided by firefighters, police or the German Meteorological Service (DWD).

The Fraunhofer Institute for Open Communication Systems (FOKUS) in Berlin has developed the free-of-charge app to inform people through their mobile phones. The registration is done through a postal code.

The advantage of KATWARN is that a user can be precisely informed about the dangers in a particular location, given that at the time of registering for the app one has to select specific regions, counties and cities.

However, the disadvantage is that if a user happens to be at some other place, the person still gets warning messages for the places registered on the app, and not for the place where the person is. 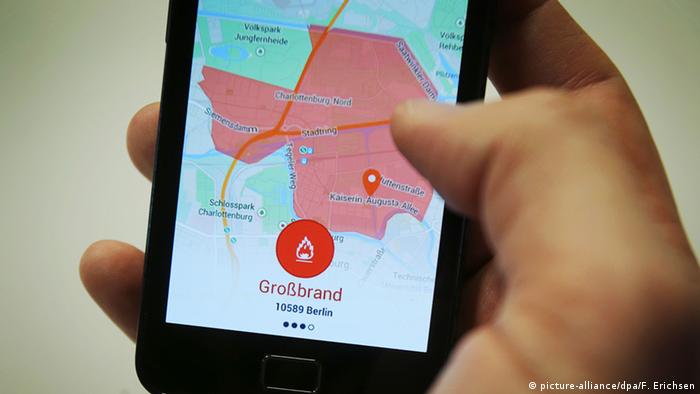 The app NINA, developed by the German Federal Office of Civil Protection and Disaster Assistance (BBK), takes a different approach: It informs users anywhere in Germany about the dangers in the vicinity of where they are. NINA is part of what is called a "modular warning system" (MoWaS), which comprises three sectors: The authorities who issue the warnings, the modular way, in which the warning is transported (mobile phones, email, radio and others) and the individual mobile or other devices.

"Initially, the idea was to develop an app that could warn people in case of military air raids with missiles," BBK President Christoph Unger explains. Until now, this has been done - and in many places still is being done - with public sirens. Those are mounted, for example, on the roofs of townhalls and schools. But sirens alone are not up-to-date anymore. "Many people will not react to those acoustic signals anymore. That's why we had to follow the trend and develop this app," Unger says.

"The apps are complementary to the existing security systems, such as radio broadcasting, TV and social media," Daniel Faust points out. He heads a working group in the department for public safety at the Fraunhofer Institute that developed KATWARN. The apps are meant as an additional source of information. 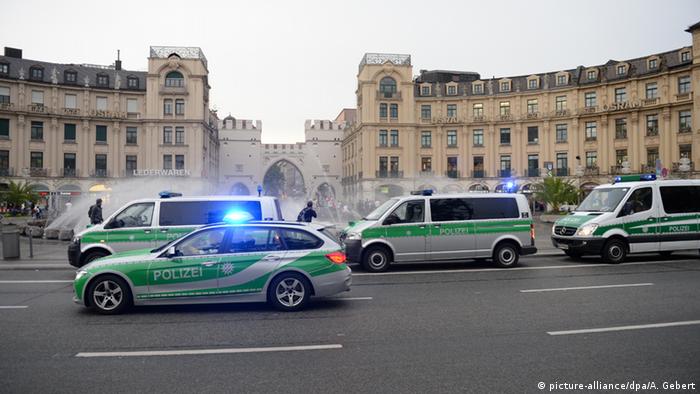 Misinformation can escalate: Here at the Stachus square in Munich, there were no gunmen, nonetheless, panic broke out

There is something no app can deliver: A warning ahead of a deadly rampage or a terrorist attack, of which the authorities had no advance warning. Police must at least have some reasonably precise information about what is going on. Nobody wants to issue a warning too early, because even well meant misinformation can have a serious negative impact on people. "Communication is certainly not easy in such extreme situations," Faust said.

The recent rampage in Munich is an example: Information was not only circulating through official warning apps, but also through social media, like twitter and facebook. While this happens much faster, none of the information can be easily verified.

This can also backfire, for instance, as witnessed by the panic that broke out far from the actual crime scene - all of a sudden at the Stachus square in the city center.

People were running for their lives, probably triggered by witness reports which suggested that other gunmen were still roaming the streets.

Better not too early

Indeed the police took ample time before activating the warning app. "The situation was contained locally very much for the first one or two hours. Nobody wanted to irritate the broader population," Faust recalls. "Only after the culprit had left the shopping mall, authorities decided to issue a terrorism warning. Then, there was a threat to every body." Once the city had made that decision, the information went out very fast.

It's the US Federal Emergency management Agency (FEMA) that pioneered the development of warning apps. The agency's app is geared to warn citizens of blizzards, earth quakes and terrorist attacks alike. In addition, it offers a survival guide with recommendations about what to do in a specific emergency situation.