Saudi intelligence warns of fresh al Qaeda threat against France | Europe| News and current affairs from around the continent | DW | 18.10.2010

Saudi intelligence services have warned of fresh terror threats against Europe and France by the Yemen-based wing of al Qaeda. The French interior minister said that based on the information, "the threat is real." 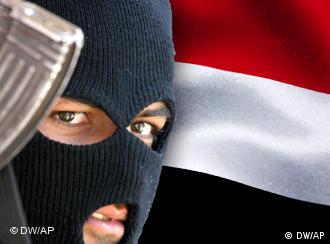 Al Qaeda in Yemen appear to be aiming at European targets

French Interior Minister Brice Hortefeux said on Sunday that Saudi intelligence services had warned of a new terror threat by al Qaeda directed against Europe, and in particular France.

"Several hours or days ago, there was a new message from the Saudis that said al Qaeda in the Arabian Peninsula was without doubt active or planning to be active in Europe, notably France," the minister told French media.

"This is not about overestimating the threat or underestimating it," Hortefeux said. "I am indicating, based on all these elements, that the threat is real."

The latest in a series of alerts

Al Qaeda in the Arabian Peninsula is an arm of al Qaeda thought to be based in Yemen. The group has stepped up its activity in recent years as the country is struggling to end a civil war. In the capital, Sanaa, security measures have been stepped up to protect western institutions and embassies.

The warning from Saudi Arabia of a potential attack by Islamist radicals is the latest in a series of alerts that have put French security forces in high-vigilance mode.

Hortefeux indicated the fresh warning was not connected with the heightened alert in France in late September. That was based on a tip-off that a female suicide bomber was planning to attack the transport system. Also in September, the Eiffel Tower had been evacuated twice over terror alerts.

Al Qaeda is a bigger threat today than 10 years ago, says terrorism expert

Al Qaeda is far more dangerous than it was 10 years ago, the former head of the CIA’s bin Laden unit tells Deutsche Welle in an interview. He is also worried about the increased domestic threat the West is facing. (07.10.2010)

German held over attack on British ambassador in Yemen

Authorities in Yemen have detained four men, including a German, over a failed suicide attack on a British ambassador's envoy in April. An al Qaeda wing in Yemen had claimed responsibility for the attack. (24.06.2010)

World powers pledge support to Yemen in fight against terror

Yemen's government says it must undergo urgent political and economic reform to help root out al-Qaeda militants in the country. International allies agree that anti-terror tactics alone will not work in the country. (27.01.2010)