Salafist extremism spreading in Germany | Germany| News and in-depth reporting from Berlin and beyond | DW | 08.05.2012

At a recent demonstration in Bonn, violent Islamists injured nearly 30 police officers, with two suffering severe injuries. What is behind Salafism in Germany, and where is it heading? 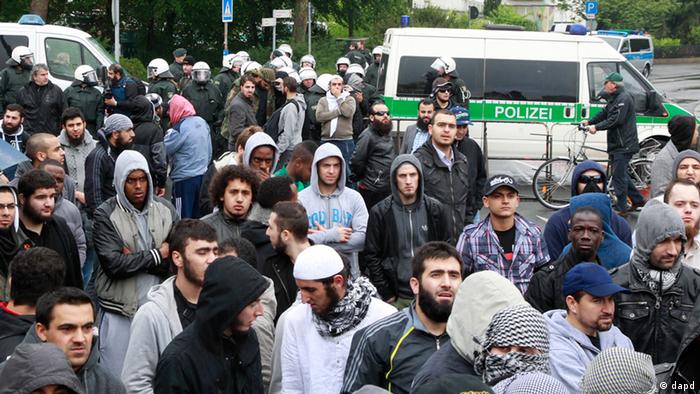 It is a propaganda video intended to entice new recruits to come to the Hindu Kush and join the holy war.

In the last two years, Germany's Federal Office for the Protection of the Constitution has noted "increasing travels in the direction of Afghanistan and Pakistan" from people who come from "milieus influenced by the Salafist ideology."

Furthermore, "almost without exception, all of those connected with Germany that have joined up with or supported violent jihadist movements, had prior contact with Salafists."

Salafism is not a unified movement. Instead, it is an umbrella concept for a number of branches of Sunni Islam.

"They propagate what they consider an original form of Islam, tracing it back to a 'Golden Age' around 1,400 years ago, from which Muslims have gradually moved away in the course of the centuries," said Raul Ceylan, an Islamic Studies professor in Osnabrück.

Their goal is to recreate this original form of Islam, Ceylan explained, and they reject all forms of subsequent religious or social "developments." Just a few radical groups within the movement advocate violent conflict, though. 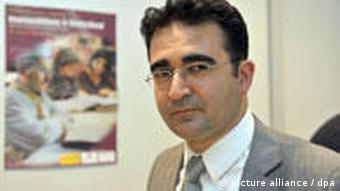 What is it that makes such extremist groups attractive to recruits?

"For one thing, it's the very close and sect-like communal life," said Ceylan. "The more you enter this circle and integrate into its structures, the less contact with the outside world you'll have."

"It's also the attractiveness of simplicity," Ceylan added, referring to the black and white picture that prevails among extremist groups of all non-Muslims being condemned to hell, while all believers will find paradise.

Finally, Ceylan said, Salafist preachers give their followers a sense of being "the chosen ones."

In the last few months, the Salafists have moved beyond basic propaganda. Last year, an association calling itself "Invitation to Paradise” tried to settle in the western German city of Mönchengladbach. Months of protests by residents ultimately prevented that, and the group was forced to disband.

On the other hand, an Internet platform launched in 2005 called "The True Religion” has expanded its activities. In recent weeks, its members made headlines by distributing German translations of the Koran in various cities. There is often a single charismatic preacher behind such actions.

"There is no umbrella organization," explained Raul Ceylan. "They are simply local associations that are networked with one another." 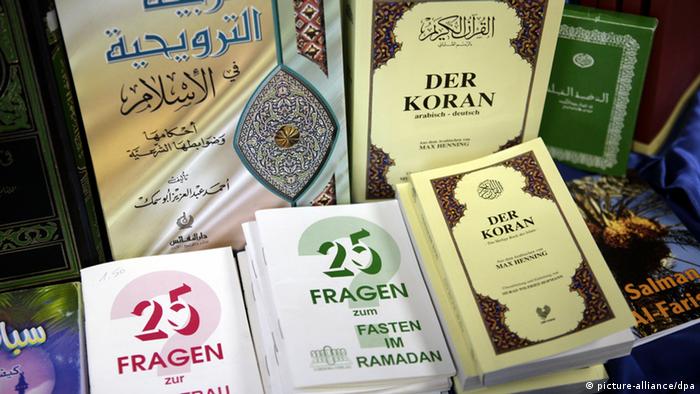 In recent days, pro-violence Salafists have been using the Internet to organize against a right-wing party called Pro NRW ahead of the North Rhine-Westphalia preterm state elections on May 13.

On May 1, a counter-demonstration escalated in the city of Solingen when right-wing extremists held Muhammad caricatures in the air. Radical Islamists went on to injure three police officers.

In the days that followed, authorities counted more and more people prepared for violent acts were registering in an Internet forum to go to the Pro NRW rally on May 5 in Bonn. A spokesman for the local police, Harry Kolbe, said his force "came up with a thorough barricade concept" and "made a few arrests ahead of the event."

The moderate Council of Muslims, which had called for counter-demonstrations to the Pro NRW event, appealed against violence.

But the situation ultimately spun out of control as Pro NRW group members set out to provoke with caricatures of Muhammad, which is forbidden in Islam.

"The violence practically exploded," said Kolbe, "And the Muslim demonstrators intent on peace were unable to stop it."

Members of the police force tasked with keeping the two groups of demonstrators apart were attacked or pelted with stones, and two were severely injured with knives. Kolbe said, "It was violence on a scale that I have not experienced in 20 years working in Bonn."

29 police officers suffered injuries, and more than 100 people were arrested. On Monday, a judge sentenced a 25-year-old to prison for three counts of attempted murder. 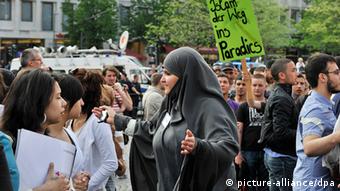 Salafists have also demonstrated in Frankfurt

Many remain horrified at the Salafist demonstrators readiness for violence, including the Coordinating Council of Muslims, an umbrella organization heading the four largest Muslim organizations in Germany, as well as North Rhine-Westphalia's Minister of the Interior, Ralf Jäger. He issued a prohibition on displaying the Muhammad caricatures at future rallies in order to prevent outbursts of violence. But two courts have already scrapped Jäger's ban.

Whether such a prohibition would really help is questionable. Radical Salafists can use violent episodes for their propaganda. Extremist groups like to use the prejudices against Muslims to their advantage, said Raul Ceylan.

"Islam is associated with violence, backwardness and misogyny, and the Salafists conform to this image - and they also want to conform to it," Ceylan said.