US swimmer Ryan Lochte has apologized on social media after he claimed to have been robbed at gunpoint in Rio with three teammates. Police maintain a very different version of events and the IOC has launched a probe. 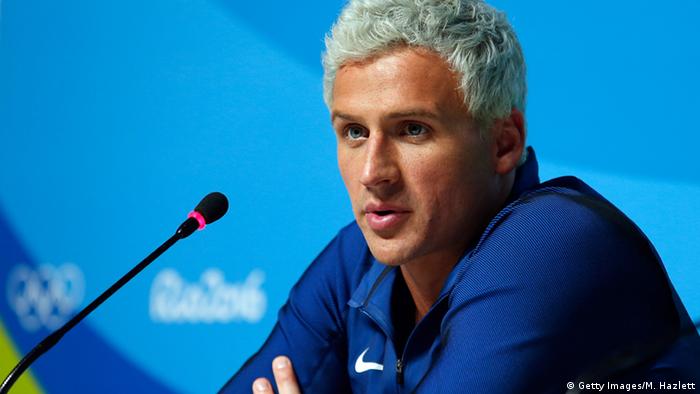 Ryan Lochte has issued an apology following the events that occurred on Sunday at the Rio Olympics, but that has not stopped the International Olympic Committee setting up a disciplinary commision to look into the saga.

"I want to apologize for my behavior last weekend - for not being more careful and candid in how I described the events of that early morning and for my role in taking the focus away from the many athletes fulfilling their dreams of participating in the Olympics," he said.

Lochte originally claimed that he and three teammates - James Feigen, Jack Conger and Gunnar Bentz - had been robbed at gunpoint by men posing as police while on their way back to the Olympic Village.

Police have dismissed this version of events, also releasing CCTV footage that appears to undermine the story. Rio authorities believe that the four swimmers actually arrived at a gas station, where one of them proceeded to vandalize a bathroom.

They were then confronted by uniformed security guards, who displayed their weapons and asked for compensation for the damage before allowing the athletes to leave.

US swimmer Feigen to donate $10,800 to charity, leave Brazil after robbery scandal

US Olympic swimmer James Feigen has agreed to donate about $10,800 to a charity, allowing him to leave the country. The settlement was ordered by a Brazilian judge after the athlete concocted a false robbery story. (19.08.2016)

US swimmers suspected of lying about Rio robbery

Brazilian authorities suspect four US athletes gave "false testimony" about being robbed at gunpoint at a Rio de Janeiro gas station. Media reports claim the swimmers paid the staff after causing damage at the site. (18.08.2016)

A Brazilian judge has ordered the passports of US Olympic swimmers Ryan Lochte and James Feigen seized over doubts about their account of a mugging in Rio. Two of their teammates were taken off a flight back to the US. (17.08.2016)

"As we understand it, the four athletes left France House early in the morning of August 14 in a taxi headed to the Olympic Village," Blackmun said.

Having paid, Blackmun said, they were permitted to leave.

Lochte referred again to the gun in his apology, claiming confusion owing to his group's inability to speak Portuguese.

"It’s traumatic to be out late with your friends in a foreign country - with a language barrier - and have a stranger point a gun at you and demand money to let you leave," he said.

Lochte said that he had waited to comment further on the issue until he was sure that his three teammates could travel home. Jack Conger and Gunnar Bentz had their passports released and were allowed to leave Brazil after being questioned by investigators.

Meanwhile, Jimmy Feigen reportedly agreed a deal to donate money to a local charity in exchange for his release without criminal prosecution. He also provided a revised statement to police.

The relay gold medal winner, who was the first of the four to return to the US, said he had waited "to share these thoughts until it was confirmed that the legal situation was addressed and it was clear that my teammates would be arriving home safely."

Reuters later reported that an IOC official had confirmed the four were facing an IOC disciplinary commission.

This year's Ironman World Championship features a new format in which women and men are competing on different days. More than double the usual amount of triathletes are in Hawaii, something that has led to new problems.

Does professional football cause testicular cancer? 06.10.2022

Four cases of testicular cancer have recently been diagnosed in the Bundesliga. Is that a coincidence? Or is the disease linked to competitive sport? For experts, the answer is clear.

Is Niclas Füllkrug the solution to Germany's striker problem? 06.10.2022

Niclas Füllkrug is on a hot streak in the Bundesliga. Is he the solution to Germany's striker problem?