Although Rwanda says it will not mandate people to take COVID-19 vaccines, some residents — especially in rural areas — say officials have been forcing Rwandans to take the jabs. 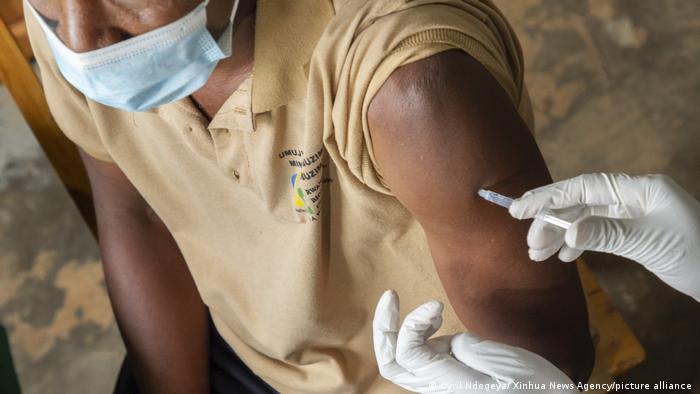 Have all Rwandans received the COVID-19 jab voluntarily?

Rwanda has been recognized by the World Health Organization as being among the countries to fully vaccinate at least 40% of their populations against COVID-19 by the end of 2021.

Currently, more than 49% of almost 13 million Rwandans have been double-jabbed, and more than 61% have had at least one vaccine administered.

But some Rwandans say this number is only possible because of force by local leaders and police. DW spoke to some people who said they had been forced to receive vaccinations. For fear of possible consequences, they either chose to remain anonymous or DW decided to leave their names out of the report. 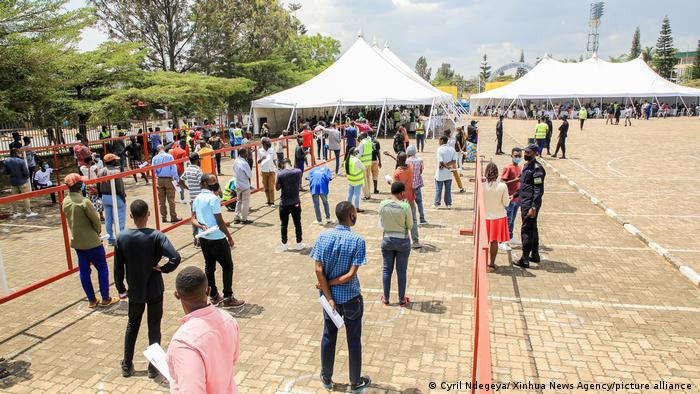 A man from the Muhanga district, in Rwanda's Southern Province, told DW that he was handcuffed in order to receive the jab.

"Around 4 a.m. our local cell leader kicked in my door," he said "I thought they were thieves because I was still asleep. There were three people standing at my door, they ordered me to go to the sector offices, and I was handed over to security personnel and I was told that I was going to be vaccinated against my will." Cells and sectors are administrative entities between villages and districts.

The man recalled that he was forced to sit under the scorching sun until the evening when he got vaccinated. According to him, five police officers and six civilians surrounded him and ordered him into a room.

"They pounced on me and dragged me on the ground, manhandling me, shoving their knees in my back and everywhere, as the handcuffs were cutting deep wounds around my wrists," he said. "They even tried to suffocate me." Then, according to his statement, medics came and injected a vaccine.

Some people cited warnings from religious leaders as their reason for not getting vaccinated. Members of a Pentecostal Church, who rejected getting vaccinated, claimed that they were held for a week by the military, police and local leaders trying to sensitize them to take the jabs. According to their account, this happened in transit centers that mainly handle street children and criminals in the Western Province's Ngororero district.

"We completely refused to take the jabs and instead asked the soldiers and police to shoot us or drown us to death. We put up a demonstration, but they said they won’t shoot us," a man told DW. He said the group was forced to take the shots. "When they realized we were not ready to change our mind, they brought in many police officers, and we were handcuffed," he said. "The police officers held us to the ground, and we were vaccinated."

A man from the Rwamagana district, in the Eastern Province, told DW that he fled with his wife from his home when authorities wanted to force them to be vaccinated. "I was suffering from malaria and taking […] medication. I begged them not to vaccinate me. When they insisted, we fled our home."

When DW spoke to him, he had still not returned home. According to him, many people in his neighborhood were forced to get vaccinated: "It's not only me. If you want, I can point to different places where they are." 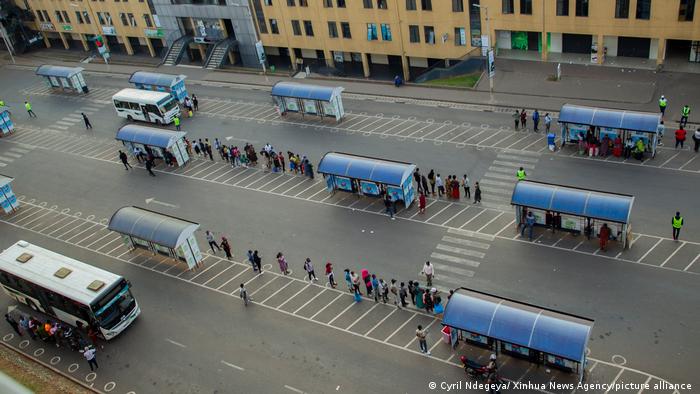 CLADHO, an umbrella body for human rights organizations in Rwanda, told DW in a statement that the groups had seen media reports about forced vaccinations. "CLADHO is in the process of investigating to get a clear picture of the situation," said executive secretary Emmanuel Safari. It considers such acts illegal.

DW reached out to Amnesty International and Human Rights Watch. Both told DW that they currently don't have any information on forced COVID vaccinations in Rwanda.

DW has also contacted Rwanda's Health Ministry and the prime minister's office, asking for a comment about the testimonies. Two deadlines passed without a statement by the authorities.

Christopher Nkusi, the mayor of the Ngororero district, dismissed the reports within his region as false. "Those with resistance are sensitized and vaccinated afterwards because even right now we have many who are not yet vaccinated. We are still in the process of sensitizing them. I am not aware of any case of forced vaccination in my district."

Rumors about forced vaccination — with physical violence or psychological pressure — have been circulating for weeks.

In December, video footage was widely shared on social networks and messaging apps among Rwandan people. The 30-second clip shows an elderly man in dirty and worn-out clothes. He says in Kinyarwanda that he doesn't want any injection or vaccination, and closes the door to his house. A person who is not visible in the video is heard saying that the injection would be for his protection, and continues: "But, if you don't accept it, the report about your behavior won't be good."

Later, a widely shared photo showed the same man sitting on the ground while another man in a military uniform put his hands on the elderly man's shoulders and a third person injected a substance into his arm.

It is not known what happened during the time between when the video footage was recorded and the photo was taken.

DW was not able to track down the origin of this content and to verify whether the scene hadn't been staged. Photo analysis tools showed discrepancies in the area in which the Rwandan flag was attached to the military uniform, which could mean that the image had been digitally altered.

DW asked experts on these tools from the German Press Agency DPA for their opinion. According to them, the conspicuousness has technical reasons, they don't see indications that the image has been technically manipulated.

Rwanda has put strict measures in place to contain the spread of the coronavirus and to encourage people to get vaccinated. This means limiting unvaccinated people from taking part in public life. Vaccination is mandatory for using public transport or going to bars and restaurants, gyms, conferences and meetings, and places of worship. Employees in businesses must be vaccinated as well as all guests attending weddings.

Rwandan media such as The New Times report on people who are losing their jobs for lacking vaccination certificates.

In the capital, Kigali, authorities started a door-to-door campaign to find unvaccinated people. Kigali's mayor, Rubingisa Pudence, said in a statement shared by Rwandan media, that this "will help to sensitize even those ones who haven't been vaccinated." What the authorities call a "survey" could be seen as well as a step towards a register for unvaccinated people.

According to reports, in the past few weeks some people chose to escape vaccination by traveling to neighboring countries such as Burundi and the Democratic Republic of the Congo. Last week, more than 100 Rwandans landed on Congolese Idjwi island in Lake Kivu.

The French news agency AFP quoted Rwandan government spokeswoman Yolande Makolo as saying that "a handful of Rwandans crossed over to neighboring countries claiming to be against vaccination, mostly for religious reasons." In the meantime, these people have been sent back to Rwanda.

The man from Rwamagana district who said he had fled his home to avoid vaccination, added that it had nothing to do with beliefs or mindset. "You should understand that we did not resist vaccination. You should give people time to think about this campaign. Why is it being done by force?" He said, there has been no law passed to justify this.

His hopes are in a manufacturing site for vaccines that is due to be built in Rwanda in collaboration with German company and mRNA vaccine developer BioNTech. "If a factory that makes vaccines is soon opening here, why can't they wait and give us a 'Made in Rwanda' vaccine?" he asked.

According to BioNTech, construction of the manufacturing site won't start before mid-2022.

Damaging myths about the coronavirus have been spreading across Africa through social media — fueling mistrust for vaccines designed to protect people. Even prominent influencers have been peddling false news.

Short on vaccines, Africa is facing an endemic coronavirus

Coronavirus shutdowns are ending across Africa. Officials don't view severe curbs as a suitable tool for containing the spread. Vaccinations alone won't cut it. Now, Africans are seeking a way to live with the virus.