Rumsfeld to Bypass Munich Conference | Germany | News and in-depth reporting from Berlin and beyond | DW | 21.01.2005

US Defense Secretary Donald Rumsfeld will not attend the Munich Security Conference in February. Some say the cancellation is likely due to a war crimes complaint against him that was filed in a German court. 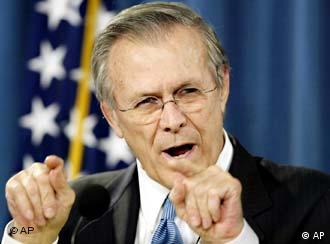 The head of the security conference, Horst Teltschik, said in Friday's edition of the Münchner Abendzeitung newspaper that Rumsfeld will instead send the number three official at the Pentagon, Douglas J. Feith, the undersecretary of defense for policy.

"This will disappoint many people in Europe, because there is a real need for discussions about the Iran crisis," Teltschik told AFP.

Rumsfeld has excused himself from the high-profile talks on international defense policy claiming prior commitments. However, some have speculated that his decision not to attend the meeting was influenced by a complaint filed against him by a New York-based human rights group, the Center for Constitutional Rights.

In December, the group filed a complaint with the Federal German Prosecutor's Office against Rumsfeld, accusing him of war crimes and torture due to his involvement in the war in Iraq.

The defense secretary later sent a message to the German government through the US embassy in Berlin that he would not attend the Munich meeting if there is a chance a case will be launched against him in Germany. However, when he informed the German government he would not take part in the conference, he did not refer to the charges filed against him.

Among the participants expected to attend the February 11 to 13 meeting of security experts from around the world are UN Secretary General Kofi Annan, German President Horst Köhler and German Chancellor Gerhard Schröder. Teltschik said that many US senators were expected to be in attendance.

Alleging responsibility for war crimes and torture at Baghdad's Abu Ghraib prison, a human rights group has filed a criminal complaint in Germany against US Defense Secretary Donald Rumsfeld and other top US officials. (Nov. 30, 2004)

The Pentagon made thinly veiled threats on Monday, suggesting US-German relations could be at risk if a criminal complaint filed in German courts over Abu Ghraib proceeds. (Dec. 14, 2004)