Lawsuit Against Rumsfeld Threatens US-German Relations | Germany| News and in-depth reporting from Berlin and beyond | DW | 14.12.2004

The Pentagon made thinly veiled threats on Monday, suggesting US-German relations could be at risk if a criminal complaint filed in German courts over Abu Ghraib proceeds. 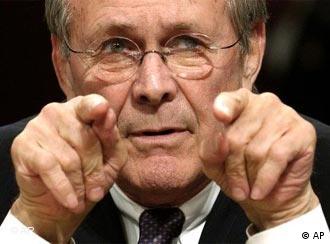 The Pentagon expressed concern Monday over a criminal complaint filed in Germany against US Defense Secretary Donald Rumsfeld and other officials over the Abu Ghraib prison scandal, warning that "frivolous lawsuits" could affect the broader US-German relationship.

The complaint was filed in Berlin on Nov. 30 by the New York-based Center for Constitutional Rights (CCR) and Berlin's Republican Lawyers' Association on behalf of four Iraqis who were alleged to have been mistreated by US soldiers.

Karpinski and five other military officers who served in Iraq were named in the complaint, which seeks an investigation into their role in the prisoner abuses at Abu Ghraib. 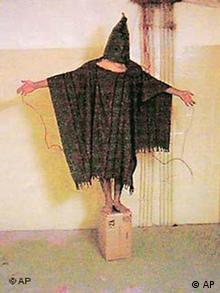 "Generally speaking, as is true anywhere, if these kinds of lawsuits take place with American servicemen in the cross-hairs, you bet it's something we take seriously," said Lawrence DiRita, the Pentagon's spokesman. "If you get an adventurous prosecutor who might want to seize onto one of these frivolous lawsuits, it could affect the broader relationship. I think that's probably safe to say," he told AFP.

Germany is home to some 70,000 US troops, many of which have rotated into and out of Iraq from German bases. Sanchez, the former US commander in Iraq, is stationed in Germany as commander of the Army's 5th Corps. 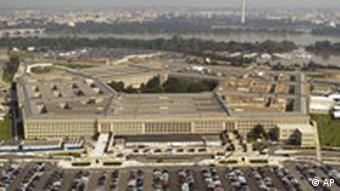 The pentagon is taking the charges seriously

The groups that filed the complaint said they had chosen Germany because of its Code of Crimes Against International Law, introduced in 2002, which grants German courts universal jurisdiction in cases involving war crimes or crimes against humanity.

It also makes military or civilian commanders who fail to prevent their subordinates from committing such acts liable. DiRita said he did not know whether the United States had raised specific concerns directly with the German government. But he said, "I think every government in the world, particularly a NATO ally, understands the potential effect on relations with the United States if these kinds of frivolous lawsuits were ever to see the light of day." 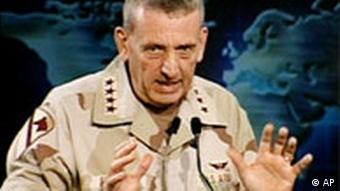 The United States clashed with Belgium last year over a similar law that allowed war crimes charges to be brought against retired General Tommy Franks (photo), who led the US invasion of Iraq, as well as numerous other international figures.

The 1993 law empowered Belgian courts to judge suspects accused of war crimes, crimes against humanity and genocide, regardless of where the alleged acts were committed, or the nationality of either the accused or the victims.

US Defense Secretary Donald Rumsfeld threatened to block funding for a new NATO headquarters in Belgium over the law, and said the United States was considering whether it would continue to send officials to meetings in Brussels as long as the law was in place.

The Belgian parliament replaced the law with a watered down version in August 2003 and its high court threw out lawsuits against Franks, former president George H.W. Bush, Secretary of State Colin Powell and Israeli Prime Minister Ariel Sharon.

Indicating the US planned to play a similar game of hardball with Germany, Rumsfeld has informed the German government via the US embassy that he will not take part in the annual Munich security conference in February should the investigation proceed.

Alleging responsibility for war crimes and torture at Baghdad's Abu Ghraib prison, a human rights group has filed a criminal complaint in Germany against US Defense Secretary Donald Rumsfeld and other top US officials. (Nov. 30, 2004)

Explaining the Code of Crimes Against International Law

Germany's Code of Crimes Against International Law is a unique piece of legislation that allows Germany to prosecute crimes against international law anywhere in the world. (Nov. 30, 2004)

One of the US soldiers accused of abusing Iraqi prisoners will plead guilty, it emerged during pre-trial hearings in Germany. Separately, an independent US report also blamed top-level Pentagon officials for the scandal. (Aug. 25, 2004)