Rumsfeld Repeats ″Old Europe″ Comments | News and current affairs from Germany and around the world | DW | 11.06.2003

At a meeting with German Defense Minister Peter Struck, U.S. Secretary of Defense Donald Rumsfeld, traveling to Germany for the first time since the end of the Iraq war, repeated his controversial "Old Europe" comments. 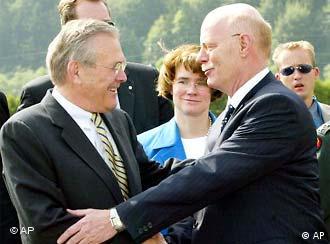 U.S. Secretary of Defense, Donald Rumsfeld, left, is welcomed by German Defense Minister Peter Struck upon his arrival in Germany.

U.S. and German Defense Ministers Donald Rumsfeld and Peter Struck met in Germany during Rumsfeld's first trip to the country since the end of the war in Iraq. At a meeting with the press, Rumsfeld indicated that German-American relations were "on their way to a point of normalcy." But his subsequent comments, repeating his controversial division between "Old Europe" and "New Europe," ruffled feathers at a time when many transatlantic issues remain unresolved.

The two came together at the tenth anniversary celebration for the George C. Marshall Center in Garmisch-Partenkirchen, a security-studies institute funded by both the United States and Germany. Both gave speeches and then met briefly to discuss issues at the top of the transatlantic security agenda, including the enlarged participation of German forces in peace-keeping and reconstruction efforts in Afghanistan. Rumsfeld thanked Germans for their assistance in Afghanistan.

But niceties aside, the U.S. Defence minister had harsh -- if indirect -- criticism for his French and German European partners. Rumsfeld repeated his "Old Europe" comments, expanding on the meaning of the division. He stated that the difference between "Old Europe" and "New Europe" wasn't a question of the age, size, or geographic location, but had much more to do with the "behavior and vision" that a nation brings to the transatlantic relationship.

Struck, however, struck a more conciliatory tone, urging the two sides to put differences behind them and move on. He stressed that irritations over a particular point would not imperil the long standing relationship. "We agree that it is time to look forward -- and not back," said Struck.

Although this represents Rumsfeld's first trip to Germany since the start of the war in Iraq, it is his second meeting with Struck in as many months. Struck traveled to Washington in early May to meet with Rumsfeld -- his trip was the start of an offensive effort (on the part of both sides) to overcome the divisions over Iraq.

Struck's trip to Washington was followed by a round of high-level diplomatic meetings and carefully planned photo opportunities, designed to convey the message that both sides were moving on. U.S. Secretary of State Colin Powell visited Germany just a week later and, at the end of the month, President George W. Bush approached German Chancellor Gerhard Schröder at the 300th Anniversary celebrations in Russia and again at the G-8 meeting in Evian. Most recently, President Bush called Chancellor Schröder to express his sympathies over the loss of German soldiers in Afghanistan.

Before Struck met with Rumsfeld in May, he was optimistic about the chances for reconciliation, stating that he had always gotten on well with his U.S.-counterpart and predicting that the matter would be addressed in a matter of minutes. "I think we can take care of this in five minutes," he said. "We'll simply say that we had an argument over Iraq, and now let's forget the argument and return to normalcy." One month later, it's not clear if making-up will be that easy.

Tensions remain, most recently surfacing during the debate over the International Criminal Court. The Bush administration has been attempting to secure immunity for U.S. soldiers, fearing that they may become victims of politically-motivated prosecutions. Meanwhile, the EU has tried to prevent other European countries from signing bi-lateral agreements with the United States supporting such action. This move by the Europeans greatly angered Washington.

What's more, questions still remain over the validity of claims made by the United States and Britain about Saddam Hussein's weapons of mass destruction. In a recent interview with the magazine Vanity Fair, U.S. Deputy Defence Secretary Paul Wolfowitz was quoted as saying that the United States concentrated on the issue of weapons of mass destruction because it was likely to garner the most support, although -- from the American standpoint -- it was never a primary reason for war.

Rumsfeld subsequently stated that he had every confidence weapons of mass destruction would be uncovered in Iraq. When Struck was asked by the ZDF morning news program whether or not he would address the issue during his meeting with Rumsfeld today, Struck replied that he wouldn't. "But it would be interesting to see what the American's had to say," he said.

Rumsfeld is in the midst of a four day trip to Europe, including stops in Portugal, Albania, Germany, and Brussels. On Thursday, he is scheduled to arrive in Brussels, where he will meet with other NATO defence ministers to discuss a possible redesign of the North Atlantic Treaty Organization structures. A key area of concern: making the organization more adept to face threats such as terrorism and the spread of weapons of mass destruction.