Rumsfeld Confirms Troop Reductions in Germany | Europe | News and current affairs from around the continent | DW | 16.08.2004

US Defense Secretary Donald Rumsfeld has confirmed reports that the US is planning a massive troop reduction in Europe and Asia -- the single largest restructuring of the US military since World War II. 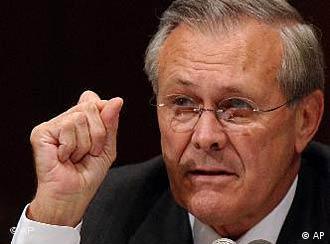 He's not said how many soldiers will leave

The withdrawal is likely to take several years and will not start in the near future, Rumsfeld told reporters on his flight back to the US after a trip to Europe and Asia.

Altogether, about 70,000 troops and 100,000 civil employees and family members currently stationed in Europe and Asia are expected to be moved elsewhere. As many as two thirds of the 70,000 soldiers stationed in Germany could be affected although Rumsfeld declined to give any numbers. He added that the changes had been discussed with German officials, who had been supportive.

"There will be a shift from Germany, and we've talked to the Germans about that, and some numbers," Rumsfeld said. "They are doing the same thing -- they're also readjusting their forces and they understand that."

President George W. Bush is expected to announce details of the plan Monday during a speech at the Convention of Veterans of Foreign Wars in Cincinnati, Ohio. According to reports, he will say that two-thirds of the reductions will come from Europe.

A senior aid involved in the planning told the Washington Post the president plans to say that the change "is necessary to adapt the nation's military to the demands of the global war on terrorism and to take advantage of new technologies."

German bases to be hard hit

Additionally, two Army divisions currently based in Germany -- the 1st Armored and the 1st Infantry -- could be moved back to the US, the Financial Times stated. However, Germany would still remain the main European operations center for the US military, with the largest number of troops -- home to training facilities and a rapid-reaction force. The shuffle would also include a relocation of the Navy's European headquarters from London to Naples, Italy. 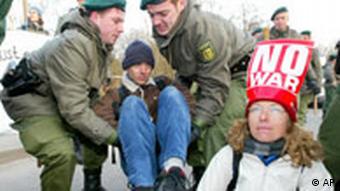 Antiwar protesters block the entry gate to the US Forces' European headquarters in Stuttgart, Germany.

Senior Defense Department sources told the Financial Times that the plans were not intended as any sort of punishment for Germany for its stance against the Iraq war. Since entering office, the Bush administration has been preparing a major restructuring of US forces. Indeed, discussions about cuts in Germany have been on the radar for the past two years.

More than 100,000 US soldiers are currently stationed in Europe, including close to 70,000 in Germany. Another 100,000 are located in Asia and the Pacific region, and a total of 150,000 are stationed in Afghanistan and Iraq.

A number of troops are expected to be moved to former Eastern Bloc countries that recently joined the NATO alliance and, in some cases, the EU. The countries include Iraq war supporters Poland and Bulgaria, where costs of maintaining a military operation are considerably cheaper than in Western Europe.

Though the news does not come as a revelation, it does indicate the US will begin the expected cuts in the near future. In June, US Army Chief of Staff Peter Schoomaker announced the US would reduce its divisions in Germany, where overhead costs are high, in the course of cutting back on Cold War deployments.

Gen. Schoomaker stressed that the costs to keep troops stationed there were immensely high.

"As we redistribute our forces globally we will reduce the amount of divisions in Germany," Schoomaker told reporters.

The U.S. Army's top general said Tuesday that his country would pull troops out of Germany. After rumors had been flying for years, it was only a question of time until a senior official confirmed the moves. (June 16, 2004)

U.S. Commander: Troops' Move from Germany a Question of Time

Tens of thousands of U.S. soldiers could be shifted outside of Western Europe, as the military considers shrinking its presence in countries like Germany and moving them east to countries that supported the Iraq war. (July 1, 2003)