Rouhani wants quick results in next round of nuclear talks 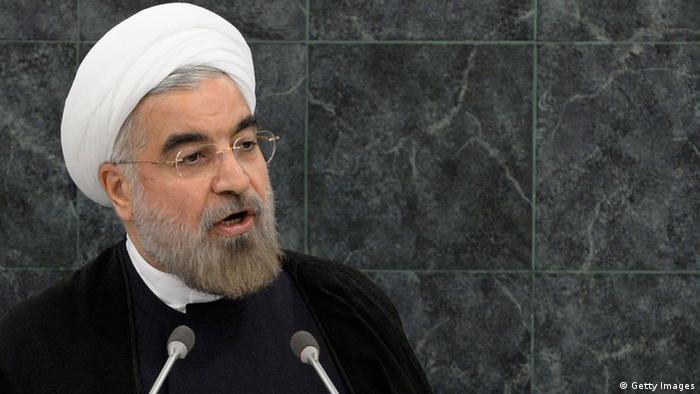 Rouhani said Friday that the recent change in relations between Tehran and Washington would help make negotiations more constructive.

"The atmosphere is quite different from the past," Rouhani told reporters at press conference on the fringes of the UN General Assembly in New York. "Our goal is the shared interest between the two nations. Our goal is resolving problems, our goal is step-by-step creating trust between the governments and peoples."

He added that he wanted nuclear talks slated for next month to "yield, in a short period of time, tangible results."

Earlier on Friday, UN and Iranian officials met in Vienna to discuss Tehran's controversial nuclear program. The West fear Iran may be seeking to develop an atomic bomb, while the Iranian government has repeatedly says it is enriching uranium for peaceful, scientific purposes. The UN's nuclear watchdog, the International Atomic Energy Agency (IAEA) has said that Iran has still has not delivered definitive proof that its nuclear program is peaceful.

This was the first such meeting since Rouhani took office in early August. Iran's new president has taken a more moderate approach to addressing the country's nuclear policy than his predecessor, Mahmoud Ahmadinejad, who blamed the IAEA for previous negotiations coming to a dead end after not agreeing to his parameters for an investigation.

The deputy director general of the IAEA, Herman Nackaerts, said Friday's talks were "very constructive," and said the next planned meeting on October 28 would "start substantial discussions on the way forward to resolve all outstanding issues."

The Vienna negotiations came a day after similar but separate talks were held in New York between foreign ministers from Iran the P5+1 nations, which are made up of the UN Security Council members – Britain, China, France, The US and Russia – and Germany.

Plan to be presented

Rouhani said Friday that an Iranian plan for a resolution on its nuclear program would be presented at a P5+1 meeting in Geneva slated for October 15 and 16.

"We say explicitly that we will not build a bomb," he said. "Through the P5+1 we want to provide even more assurances."

Rouhani added that his government had the backing of Iran's other centers of power when in any agreement that would be reached.

"On the nuclear issue, the government has total discretion," he said.