Twelve internationally renowned architects have donated their blueprints for the newest Ronald McDonald House in Hamburg. Critics say McDonald's is misusing the goodwill; families say the homes have saved lives. 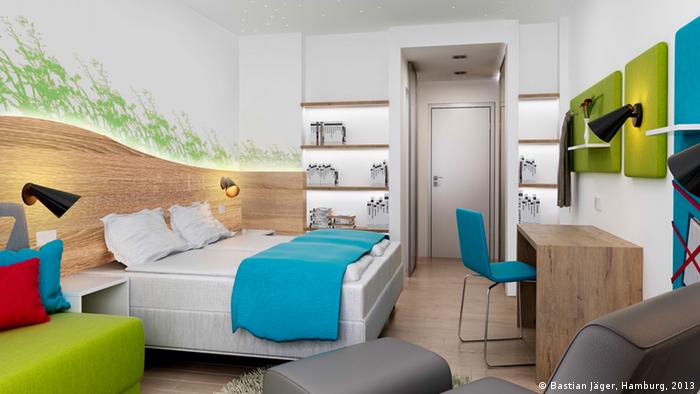 Six-month-old baby Elai smiles and kicks his little feet when people speak. "The doctors say it's the sick children who are most friendly," Elai's mother Tatyana Fornoff says, despite the constant prodding and pricking of needles.

Elai has lived in the intensive care unit in Cologne's Children's Hospital all his life. After an emergency C-section, Elai was born four weeks premature. His esophagus wasn't formed, and today he breathes, wheezing rhythmically, through a valve that protrudes from his throat. Within days of Elai's birth last July, the Fornoff family had packed its bags and moved into the Ronald McDonald House in Cologne. 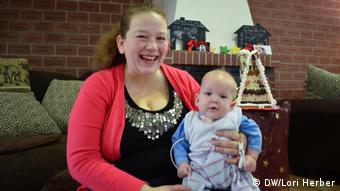 "When you're in a situation where you think your own child might die, or you don't know how to keep going, then a place like this is truly a second home," Fornoff says. "You can't imagine how much a house like this relieves some of the burden by offering a place to shower, to do laundry, to rest."

Tatyana cradles the baby from 8 a.m. to 8 p.m. every day, now and then placing him in his bassinet, to which he is connected to by a series to tubes that drain the fluid from his esophagus.

Her "second home" at the Ronald McDonald House in Cologne is one of 19 such facilities in Germany that offer families with sick children on-site accommodation at the hospitals where their children are being treated. Each of the 19 houses has its own character: Cologne's looks like a fortress, nicknamed the "castle of protection." 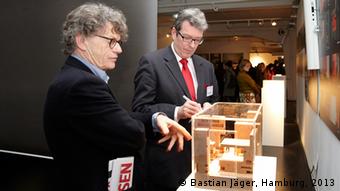 Families like the Fornoffs are precisely who the Kinderhilfe Stiftung, McDonald's Children's Aid Foundation, had in mind when it teamed up with AIT ArchitekturSalon in Hamburg. The goal was to design a Ronald McDonald House for the Hamburg district of Altona with an emphasis on how aesthetics foster healing.

"As we know from various projects in the healthcare sector, it is specifically the feeling of well-being and a pleasant atmosphere that have an influence on the healing process and the mental state of patients," said Thomas Willemeit of German architecture firm GRAFT, which helped organize the call for blueprints. "Especially in medical care, the atmospheric quality is usually underrated."

From more than 40 submissions, the selection was narrowed to 12 internationally renowned architects and interior designers (including GRAFT) tasked to transform the house into a flexible space for families to live, play, sleep and heal while their critically ill children undergo hospital treatment.

Stars like Zaha Hadid, Rem Koolhaas and Manuelle Gautrand each got to work on one of the 11 individual 25-square-meter apartments. GRAFT designed the shared space, or "oasis," within the home. Their combined work is on display in the Zuhause auf Zeit exhibition (A Home from Home) at the AIT Architektursalon in Hamburg.

"It was the first time that I as an architect was challenged with this type of assignment," said Switzerland-based architect Sara Spiro. "These families are leading a nomadic life, but they are not freely traveling for fun. They are forced to travel because their child must be in another city." 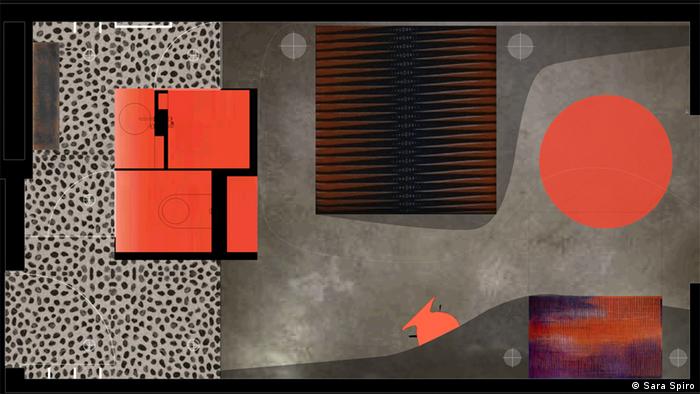 Sara Spiro's design from above, shows the bed as the central focus of the open room

Spiro likened the situation to nomads, who are constantly on the go, but gather under one community roof. Yurts. Teepees. Regardless of the name, she sought to create a singular cozy room where families could work, play and comfort each other. She understands the situation all too well. As the daughter of a doctor who practiced medicine in Africa, Spiro was constantly on the move herself. Her design was inspired by her own family being forced to juggle the logistics of her little sister's long-term illness.

"When we came to a place we put our little things on a table or shelf on the wall," Spiro said. "And these personal belongings claimed the room. If you put everything in cupboards, you enter a nice architectural room, but if your belongings are there waiting for you, it's your space for this time."

In her apartment design, Spiro incorporated small shelves on the wall. In fact, there is no cupboard storage except for undergarments.

Although the philanthropic aim behind the Ronald McDonald Houses may be admirable, it presents a perplexing juxtaposition against the McDonald's corporation's controversial environmental impact, treatment of animals, and lackluster health impact. 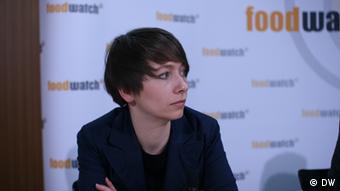 Anne Markwardt of Germany-based foodwatch, which researches food industry practices, said it's respectable for companies to donate for a charitable cause, but she questions the motive.

"One has to remember that a large amount of the funding does not come from McDonald's itself but from private, corporate or other donors," Markwardt said, adding that if McDonald's cared about children, it would simply fund homes without requiring them to bear the McDonald's name, and "stop selling Happy Meals with soft drinks and targeting children with fast-food marketing."

Of course the homes serve a great need for families with sick children - that's not the issue, Markwardt said, adding that the more emotionally bound people are, the less often they might consider the health aspects of McDonald's foods.

"Commitments like these don't come 'free' and are often used as marketing ploys for profitable but unhealthy products, as well as means of indirect political influence," she said, adding that the Ronald McDonald Houses are frequently visited - and lauded - by politicians. 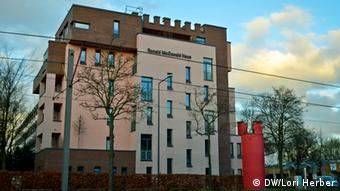 "Yet McDonald's enjoys 100 percent of the branded benefit of this charity," Simon wrote, adding that for a corporation, McDonald's is somewhat stingy with its philanthropy, donating 30 percent less than peers like PepsiCo and CocaCola.

To reach this sum, McDonald's lumps together its own corporate funding with the coins customers throw into the designated box at the register and with larger donations from other companies. When customer generosity and the charity benefit revenue are removed from the equation, that 62.6 percent drops down to 25-percent funding by the McDonald's corporation and franchises, meaning that external donors account by far for the bulk of the foundation's funding.

For the foundation, it's not a matter of where the money comes from. What's important is that people - and corporations - bother to donate at all.

"In our opinion, every euro that flows into the non-profit makes our society more social," said the foundation press office. "If a company wants to support an idea not only financially, but also through personnel and ideas, we think that is valuable. At the same time, the awareness of the brand ensures a certain familiarity that helps our work." 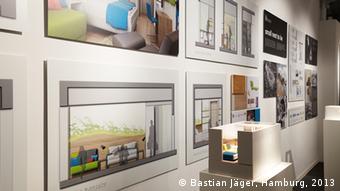 This sticky area between corporate zeal and charitable intent sparked some initial controversy in the design community, said Kristina Bacht, curator of AIT ArchitekturSalon, which is hosting an exhibition of the new Ronald McDonald House apartment designs.

"There are some critics, but I think in the end you have to differentiate between McDonald's and the Children's Aid Foundation," Bacht said, adding that none of the gallery's visitors have questioned the intent behind the project. "When we put the people together - when the architects and designers saw how open-minded the foundation was and that the whole work for the children really comes from the heart - they were completely convinced."

Swiss architect Sara Spiro said that all good deeds should be recognized - regardless of the initiator.

"If critics really think McDonald is the devil, shouldn't even the devil make a good gesture?" From her home in Zurich, Spiro can spy a McDonald's just six metersaway. Even if she rarely eats there - she's vegetarian - she said people make an active choice in what they consume. "The foundation is helping so many people. It has nothing to do with the food."

Back at the Ronald McDonald House in Cologne, controversy is the last thing on Tatyana Fornoff's mind as she rattles a toy for baby Elai. For her, the home has been a blessing. It's the local volunteers who come in to make breakfast for families on Tuesdays, and a three-course dinner on Thursdays.

"That's the highlight of my week," Fornoff says. "Those are the sort of things that you just aren't able to do on your own anymore."

Design in Germany has long been about industrial craftsmanship with little attention paid to luxurious interiors. These days, designers are trying to build on a tradition that has taken a backseat to functionality. (11.09.2013)

Will Paris' plan to build 12 new skyscrapers ruin the city?

Paris' wide boulevards and elegant buildings date from the 19th century. But now a ban on building height has been overturned, and the city is set to get 12 new skyscrapers. But will this threaten the city's identity? (18.07.2013)

Scientists say fast food can raise a teen's risk of developing asthma by nearly 40 percent. The findings come after an international study involving children in 31 countries. (16.01.2013)