After two mass shootings in a month left 19 people dead and dozens injured in two US states, you'd think gun control would become a major topic of the US presidential race. Instead no one is going near the issue. 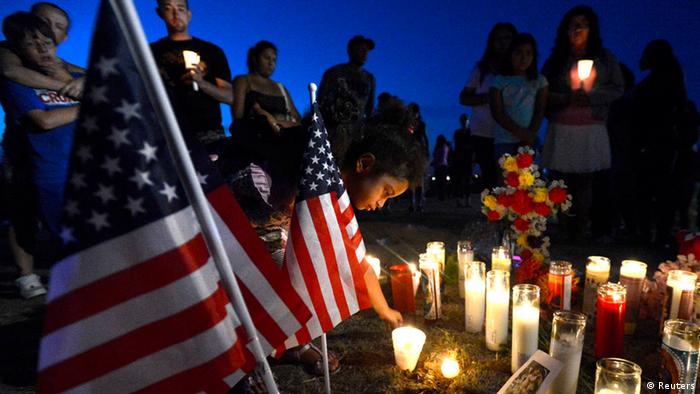 To compare: After two massacres in a row committed each by a single, heavily armed gunman first in a movie theater in Colorado and then a Sikh temple in Wisconsin just weeks apart and in the middle of a presidential campaign, a national debate about gun violence in the US never even got off the ground.

As the news of the shooting spree spread, the attention quickly focused on the victims and the background and possible motives of the perpetrators. After mourning the victims and establishing possible motives of each shooter - psychological and racist - public discourse in both cases never really shifted to gun laws as a potential factor or enabler of these crimes, but instead simply fizzled out within a few days of the incidents.

Notably, both presidential candidates steered clear as much as possible of a serious debate about gun violence in the US. 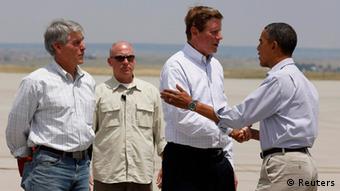 In his most direct statement on the issue President Barack Obama vowed to seek consensus on reducing gun violence and argued that steps to do that should be "common sense." He also reiterated his general support for a reinstatement of an assault-weapons ban without specifying any measure to push for such a ban.

His Republican opponent Mitt Romney meanwhile said he didn't think the US needs stronger gun control laws. "We can sometimes hope that just changing a law will make all bad things go away. It won't," Romney remarked.

It's not all that surprising that the Republican Party which traditionally has been closely aligned with gun rights advocates, particularly with the National Rifle Association (NRA), arguably the country's most effective lobby group, isn't itching for a debate about gun control in the wake of two deadly mass shootings.

But why are the Democrats, which in the past had pushed for stricter gun laws, mum on the issue?

"The gun issue has become kind of radioactive to both of our major political parties," Kristin Goss, an expert on gun politics at Duke University in Durham, North Carolina, told DW.

There's the perception among Democrats, adds Goss, that the party lost the House of Representatives in 1994 and that Al Gore lost his home state and thus the presidential election in 2000 due to their support for gun control.

While that view isn't substantiated by any social science research, it has become lore among Democrats with the result that they are treading very carefully on gun issues, notes Goss.

Robert Spitzer, political science professor at the State University of New York at Cortland and author of "The politics of gun control," concurs. He points to the fact that President Obama earlier in his career supported tougher gun laws, but after taking office caved in to the gun lobby by signing into law measures that allow people to carry concealed weapons into national parks and in checked luggage on railroad trains.

"Those were small measures, but measures that the gun lobby was pushing for," says Spitzer.

How much the tide has turned against gun control is - ironically - evidenced by the fact that until 2004 Mitt Romney's stance on the issue wasn't that much different from Obama's.

Of course Romney these days doesn't want to be reminded about his earlier stance on guns, says Goss. 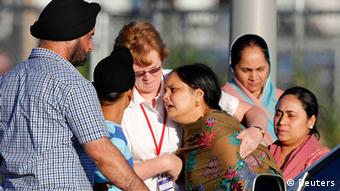 The recent shootings are unlikely to spark gun debate

Today then, Romney and Obama, again are pretty much on the same page about the issue - namely that they want to stay away from it.

Because both candidates and parties believe that raising gun violence as a topic is two divisive and could backfire, the issue is simply shunned from political discourse.

"So we have a situation where incidents of gun violence have essentially been divorced from gun policy in America and that is the way the gun lobby wants it," says Spitzer.

To be sure, there are some political voices trying to advance the issue, like New York City mayor Michael Bloomberg and others, but their efforts tend to be short-lived and remain regional at best.

Thus, a national debate about gun violence - especially in times of gun ownership and violent crime figures at a low not seen in decades - is unlikely to figure either in the presidential campaign or in the near future, notwithstanding that the outcome of the shooting in the movie theater in Colorado could have been different if the assault weapons ban of 2004 were still in effect.

Under that federal law, explains Spitzer, the possession of assault weapons and high capacity bullet magazines - such as the one used by the shooter whose ammunition drum contained 100 bullets that could be fired without reloading - was banned.

Without a law banning it, ammunition clips such as the one used by the shooter can be bought legally as can the 6,000 rounds of ammunition the shooter purchased over the Internet.

James Holmes has been charged with 24 counts of murder and 116 counts of attempted murder in a Colorado courtroom. He is accused of opening fire at a cinema near Denver 10 days ago, killing 12 people. (30.07.2012)

US authorities are investigating claims a gunman who killed six people in a Sikh temple had ties to white supremacist groups. President Obama has called for more soul-searching to reduce violence in America. (07.08.2012)

The third public shooting in the U.S. in a month has taken place in Texas. Three people are reported dead, including a police officer. (13.08.2012)