US presidential candidate Mitt Romney has suggested the United States could move its embassy to the "capital" Jerusalem from Tel Aviv, a controversial move. He also attacked Iran and pledged US support for Israel. 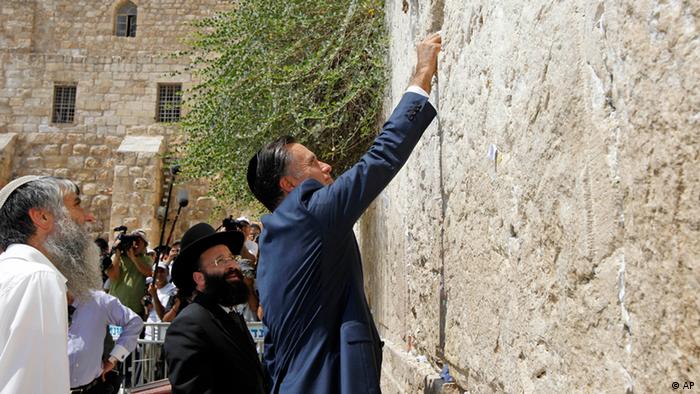 Romney said he recognized Israel's right to defend itself against Iran and insisted that stopping Iran from becoming a nuclear power "must be our highest national security goal."

"Israel faces an enemy who denies past crimes and seeks to commit new ones," he said on Sunday in Israel, where he met Prime Minister Benjamin Netanyahu and other leaders.

"Make no mistake, the ayatollahs in Iran are testing our moral defenses. They want to know who will object and who will look the other way. We will not look away, nor will our country ever look away from our passion and commitment to Israel," he said in a speech delivered on a rooftop overlooking Jerusalem's Old City.

He stopped short, however, of fully endorsing recent comments by one of his policy advisers who had declared that the United States "would respect" an Israeli decision to launch a unilateral strike on Iran's nuclear facilities.

Romney also called Jerusalem the capital of Israel and suggested that, if elected in November, he would consider moving the U.S. embassy there from Tel Aviv. The move is highly controversial as both Israelis and Palestinians claim the holy city as their capital.

The issue has been a major diplomatic headache for the Americans, who have refused to make the shift because it would imply the sanctioning of Israel's incorporation of Arab East Jerusalem after its capture in the 1967 war.

Romney made it very clear that criticizing Israel was not part of his policy by saying that it was a "basic truth" that the United States and Israel would always stand together.

The presidential hopeful also met other Israeli officials, as well as acting Palestinian Prime Minister Salam Fayyad. He visited the Wailing Wall, a Jewish holy site, where he placed a paper with a prayer between its ancient stones.

Meanwhile, Palestinian negotiator Saeb Erakat was outraged by Romney's comments about Jerusalem. He told the AFP news agency that "Romney's declarations are harmful to American interests in our region, and they harm peace, security and stability."