Rome under quarantine: A diary in times of coronavirus | Culture | Arts, music and lifestyle reporting from Germany | DW | 19.03.2020

Rome under quarantine: A diary in times of coronavirus

Italy's emergency measures to contain the coronavirus have paralyzed public life in Rome. The quarantine will last until at least April 3. Simone Alliva reports on the atmosphere in the Italian capital. 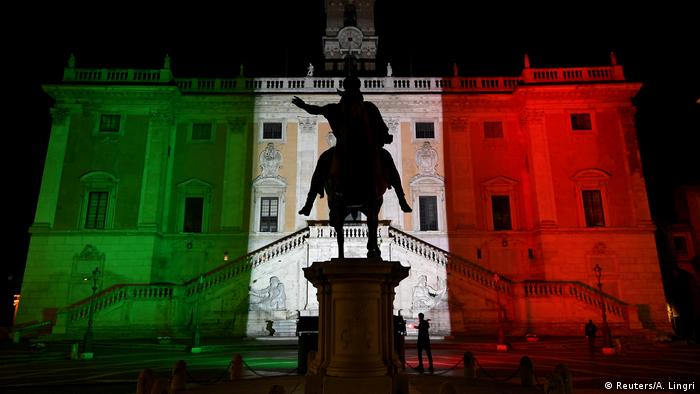 A holy silence lies over St. Peter's Square. On one of the largest squares in the world, at the foot of St. Peter's Basilica, there is nothing but silence today.

Usually, flags wave here, fathers carry their children on their shoulders, and groups of nuns try to get as close as possible to the sacred place. On Sundays, the square is normally crowded: No matter the weather, up to 300,000 people try to catch a glimpse of Pope Francis during mass. They want to take with them an unforgettable memory that seems to come from another, very distant time.

The large screens on the square, which normally broadcast the Angelus Prayer on Sundays, are turned off. The broadcasts have been postponed until after Easter, as all events that would lead to large gatherings have been banned by the government. Only very few tourists — all wearing face masks — stop for a photo of the imposing St. Peter's Square. 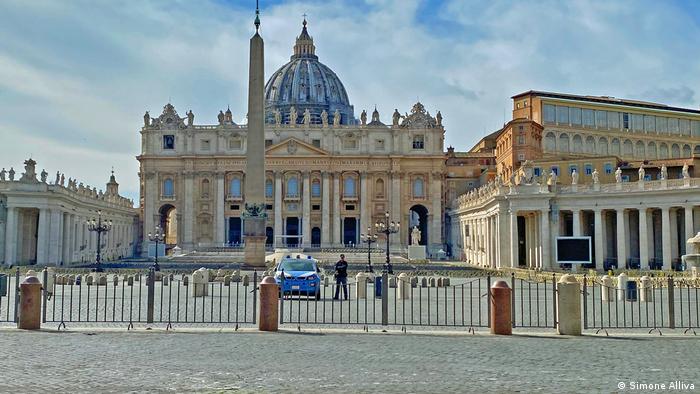 Altogether, there are 10 people there at 1:00 pm — on a square where otherwise more than 300,000 people gather. Only policemen patrol. The Carabinieri stop people who should not be on the road and impose fines. You risk a prison sentence of up to three months or a fine of up to €206 ($226) if you are outside without permission.

It's only possible to leave the house with a special permit — or to buy food or medicine.

The streets of Rome — the Eternal City — are desolate. One of the main attractions, the Piazza di Spagna, is practically deserted; the Spanish Steps are empty. 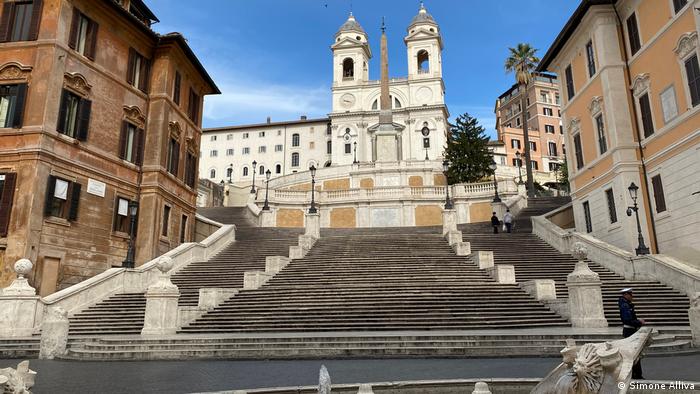 Next to the Barcaccia Fountain in front of the steps, a lone policeman watches over empty space. He controls pedestrians at a distance: "Let's protect our grandparents," he explains. He wears no gloves, no face mask that could potentially protect him from the virus. "We're not being looked after, but we have to work." He's afraid. "Of what?" The virus. "But I disinfect my hands all the time, you see? Every time I control passersby." He stops tourists. He tells them to not climb the stairs. "You'd better go back to the hotel. It's not safe." No one is safe. Not even law enforcement.

Noisy Rome is at a standstill. All of Rome, all of Italy, is under quarantine.

Rahman, 45, stands forlornly at his shop door; he hasn't had any customers for days. The Bengali native runs one of the few shops that still remain open in the center of Rome, at the foot of the Colosseum. You just turn the corner and immediately come upon his shop, Sapori d'Italia (Italian tastes).

The only reason small businesses like his can remain open during the Italian quarantine is because shops selling food are still exempt.

His shop is stocked with different kinds of alcoholic beverages, but there aren't any customers in sight: "This has never happened before. People are afraid, they don't buy anything. Maybe you want to buy something?" 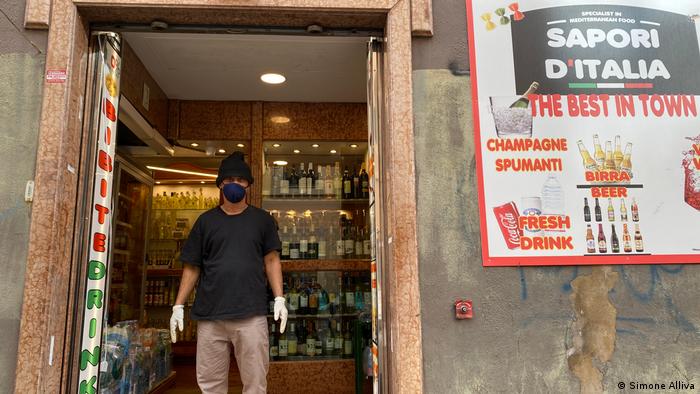 Rahman wears a face mask, but it's not enough to protect against the virus. He wears a PM2.5 anti-smog sponge face mask, but it's FFP2 and FFP3 filter masks that are recommended as a precaution against the coronavirus. "I know that this is not the right face mask. I started wearing it so as to not frighten the customers. But now, no customers come in at all. The problem is that we don't know how long it will take and how long we shopkeepers will have to hold out. I leave the shop open, hoping that someone will come; I can't lose hope now. Do you want to buy anything?"

They are both called Riccardo, they are both 26 years old, and both symbolize a whole generation under quarantine.

Riccardo One is a working student who is studying economics and works in an agency that sells language games for schools.

The other one is studying medicine in his fifth year. The first comes from Puglia, a region in southern Italy. The second is from Milan — the epicenter of the coronavirus epidemic in Italy. 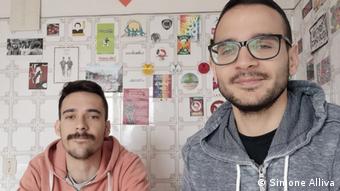 In Rome, the two share an apartment, like many young people their age. For medical students, everyday life goes on — they are needed in hospitals, so the government has issued a special permit for them.

All Italians working in the health care sector have to do their job (except in the northern regions, such as Lombardy and Veneto): "This really causes big problems. Since security measures cannot be guaranteed, we risk being infected — and risk infecting loved ones, like my roommate, because of sharing things."

The Riccardos, however, are having a hard time studying: "We are studying, even though universities have great difficulties teaching via the Internet. They are not prepared."

Life under quarantine is boring. "There's not much to do. The supermarket is right in front of our door. There is always a long queue in front. We managed to get food. It took us 45 minutes to get in. We have Skype parties on the weekends, because otherwise it's not possible to meet friends. Before the quarantine, we used to go to public parks, now they are closed by decree."

When asked if they always keep at least one meter distance, the two Riccardos reply: "We don't even do that when we go shopping together. We live together, after all."

The Arch of Constantine

A theater. That is what Rome has become. A vast empty theater, ready for a performance. You only have to pass through the Forum Romanum, at the end of which the Arch of Constantine and the Colosseum stand monumentally, in silence.

Even the police checks are part of a scripted performance: "Documents, please!" Documents are presented and you are either allowed to pass or not.

Armored vehicles and military trucks are also posted here. A police car drives up and down the deserted square in front of the ancient arch.

The exit of the Colosseum subway stop, which overlooks the most famous monument in the world, is empty. Usually, there are masses of tourists — people taking pictures, crowding in and drinking the water from the nasoni, the public fountains of Rome. 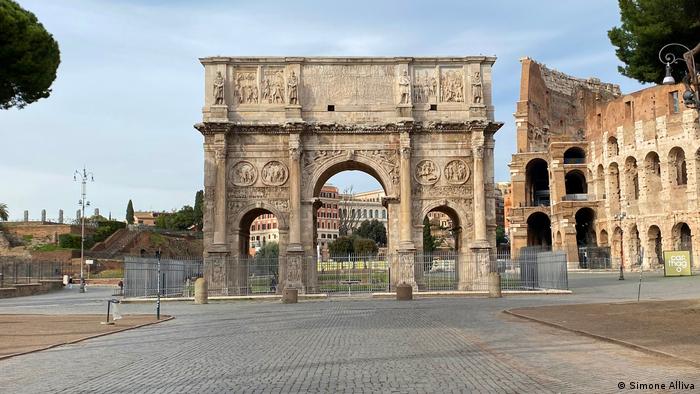 The Arch of Constantine

Instead, far and wide there is not a soul in sight. The Arch of Constantine is deserted. Normally 7.5 million visitors a year come here to see the monumental beauty of ancient Rome.

According to statistics, the income from the tourism sector, which accounts for 6% of Italy's gross domestic product, is expected to fall by 90% in March alone — a loss of €600 million.

This becomes very clear at the Arch of Constantine: Where you'd usually find many beggars and actors dressed as gladiators, it's now empty. No rickshaws or street vendors.

A carabiniere pulls down his face mask and lights a cigarette: "What are we doing here?" he asks a colleague, who shrugs his shoulders. The Eternal City stands abandoned. 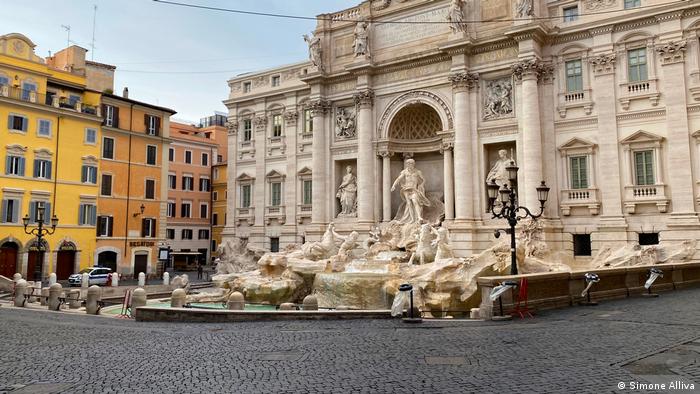 The Trevi Fountain once served as the backdrop for Federico Fellini's 1960 film, La Dolce Vita. The famous scene in which Anita Ekberg shouts, "Marcello! Come here!" is familiar to many.

The fountain can be visited at any time of day or night. Normally, no one can walk past it without taking a selfie or throwing in a lucky coin. Now, access to the fountain is blocked.

Marina and her dog

"I've been home for three days. I still haven't entirely realized what's going on," explains 26-year-old Marina. "Before, I was doing an internship at a communications agency and didn't have much time for myself and my family. Now, I have as much time as I want because the internship has just been suspended by a regional order." A forced leave, but without pay.

"Unfortunately, I will not receive a reimbursement of expenses until April 3. I will only be able to make up for the months I missed at the end of the internship when the quarantine is over." But it's all right, she explains, the agency could not guarantee the health of the staff: "For several days we worked as if nothing were wrong, without following safety recommendations — like keeping our distance or wearing face masks. Only now, there seems to be change. And I am glad — for the health of my colleagues." 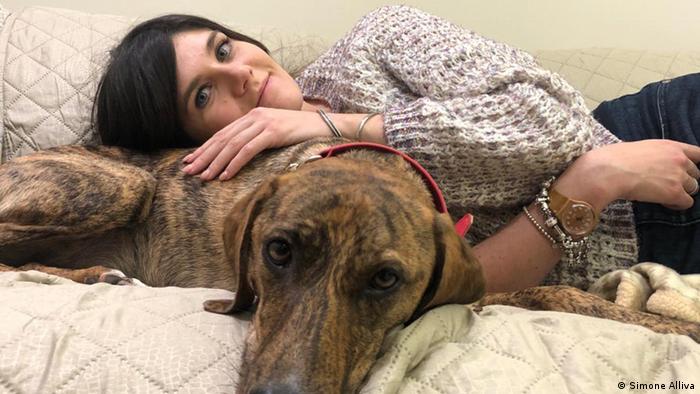 Marina and her dog

What are her days like? "I only go out to shop and walk my dog. According to the emergency regulations, I am still allowed to do that. Walking is recognized as 'necessary' going out." Still, Marina feels a lot of emptiness in these days of isolation — the emptiness of an uncertain future: "I had a job, now I don't have it anymore. I had a salary, now it's no longer there. Even my social life has simply fizzled out; I can no longer see my friends. I am afraid to visit my parents because I might be unknowingly infected. I could infect them without realizing it. We're prisoners of the virus, and who knows how long we'll have to stay trapped."

Reporting from Rome, Simone Alliva spoke with these local citizens on March 12.

Coronavirus in Italy: Solidarity in the time of disease

Italians affected by the coronavirus outbreak are describing the situation as "being in a war." With parts of the country in virtual lockdown, young volunteers are providing a little solace, especially for the elderly. (18.03.2020)

Living in Rome under the shadow of coronavirus

With all of Italy in quarantine to halt the spread of COVID-19, people are adjusting to a new way of life. Under lockdown, Megan Williams reports from her home in Rome. (14.03.2020)

The COVID-19 outbreak has caused economic and social activity to grind to a halt across Europe. More positive news, however, has emerged from the epicenter of the pandemic — Wuhan, China. Follow DW for the latest. (19.03.2020)