Romanian Finance Minister Darius Valcov has resigned amid allegations that he took a massive bribe. The anti-corruption authority suspects Valcov received 2 million euros from a company to fix a construction contract. 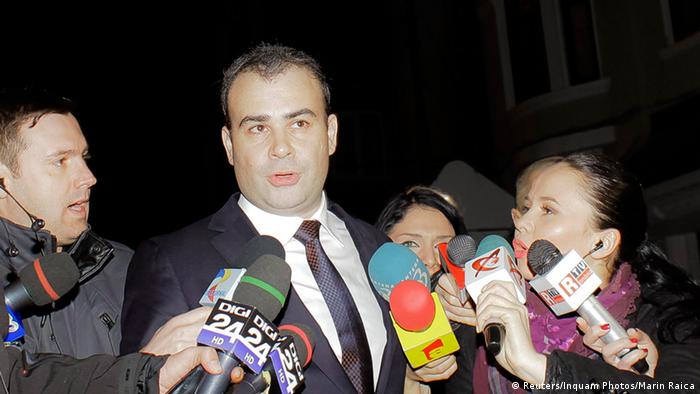 Valcov resigned amid suspicions that he accepted the 2-million-euro ($2.11 million) bribe as mayor of Slatina, in southern Romania. He quit hours after President Klaus Iohannis urged the prime minister to fire him, saying the investigation had affected "the activity and credibility of the government."

"I spoke with Darius Valcov today at lunch and he handed me his resignation," Prime Minister Victor Ponta told Romanian TV channel Antena 3.

Prosecutors have alleged that between 2010 and 2013 Valcov favored a businessman in Slatina with contracts, in exchange for a 20 percent cut. No immediate comment has come from Valcov or the Finance Ministry, though he has denied the allegations.

Valcov previously served as budget minister, a portfolio merged with the Finance Ministry in a December reshuffle after Ponta lost his presidential bid in a controversial election last fall.

The prime minister had initially supported Valcov, but has accepted his resignation. Ponta has asked Valcov to present the new fiscal code next week and will then name a successor, the Mediafax news agency reported. In February, Ponta and Valcov announced plans to cut all major taxes between 2016 and 2019, a move analysts said could take an unsustainable toll on the budget.

"It is important for Romania to have this project," Ponta said at the time.

Long considered one of the European Union's most corrupt states - investigators have looked into Ponta's father- and brother-in-law - Romania has cracked down in recent years, putting thousands of public servants on trial and convicting many, including several high-ranking officials.

The country's prosecutors and magistrates have won praise from Brussels for crackdowns that have seen many members of parliament face trial for graft-related offenses. In January, President Iohannis appeared in court on prior conflict-of-interest charges.

Those sentenced to prison for graft include Ponta's political mentor, former prime minister Adrian Nastase, in two separate cases in 2012 and 2014. However, Valcov has become the most senior sitting Romanian politician to resign because of corruption allegations amid the flurry of high-level investigations and graft trials over the past two years.

Ponta could face a leadership challenge at the Social Democrats' congress this month, and right-wing politicians have said they aim to file a no-confidence vote in parliament this year. The next scheduled parliamentary election is due in late 2016.

Klaus Iohannis has been sworn in as Romania's new president. The new head of state pledged to use his time in office to fight corruption and strengthen the country's institutions. (21.12.2014)

Ex-Moldovan President Igor Dodon is accused of taking bribes. The pro-Russia politician was in office from 2016 until 2020.