Bill Haley's hit "Rock Around the Clock" made its debut on April 12, 59 years ago. DW takes a look back at the 1950s, as a new music style gave expression to a generation's outlook.

But it did more than that: The first rock 'n' roll song also marked the beginning of a youth and protest movement that found supporters around the world. Racial segregation and the hardliner Joseph McCarthy's campaign against political dissent were the driving factors in the US. Both black and white people got involved - especially in the youth population. And their dissatisfaction came to the fore first by way of literature with the Beat poets, then in music and films, like those starring James Dean.

Young people were growing rebellious and were searching for the right sound to match.

Between black and white 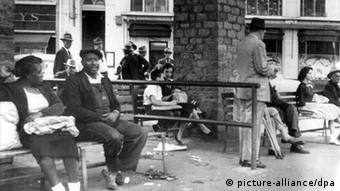 Rock 'n' roll delivered a sound with which many young people could identify. Musically speaking, early rock 'n' roll was a mix of black and white music. Put simply, it combined blues and country. The genre was defined by short compositions written in a 12-bar blues progression, paired with a rolling, boogie-woogie bass line.

On top of the music usually came a raw, throaty voice that critics liked to dismiss as screaming. A decisive turn came as electric instruments played a larger and larger role in the music, pushing it in a completely new sonic direction. 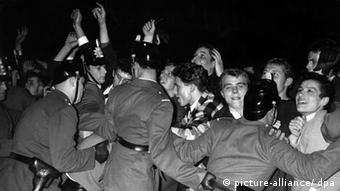 Bill Haley fans in Frankfurt get pushed back by police

Bill Haley also had to struggle with a volume problem in recording his legendary "Rock Around the Clock" track. His band, the Comets, had just 20 minutes on April 12, 1954, to put the song on tape. The first attempt worked, but the voice was far too quiet. Not so on the second try. But the song has a history full of obstacles:

There was a first recording without Haley, who did, however, have the song in his stage repertoire and wanted to do his own version. So "Rock Around the Clock" became the B-side to a less than successful single. The song was nearly forgotten until the director Richard Brooks used it in his film "Blackboard Jungle." The film became a hit in 1955, and suddenly "Rock Around the Clock" was selling millions of copies. In 1956, a second film sharing the song's title was made, and also went on to major success. It must have been like an earthquake. A genre was born, and it didn't take long for a host of imitators to emerge. 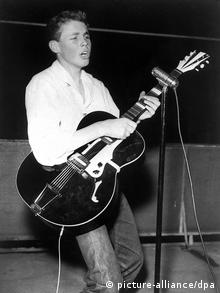 It was Elvis Presley who really drove rock 'n' roll into the mainstream - with all that that entailed. It became less rebellious, but more commercial and successful. And it didn't take long for the new style to catch on in Germany. In 1956, "Rock Around the Clock" became the first international record to sell more than a million copies. Peter Kraus and Ted Herold brought the tight jeans, flipped up hair and quick dancefloor moves to German rock 'n' rollers.

It seems quaint looking back today that that was all it took to be a rebel in the 1950s.

It's had its share of ups and downs in critical assessment, but Rachmaninoff's music is here to stay. We recall the composer who has been called the last great Romantic. (05.04.2013)