Robert Huth is enjoying his most successful season yet at the Premier League's Stoke City - he's now their joint top goalscorer this season. And it took Stoke's quintessential Englishness to bring out the best in him. 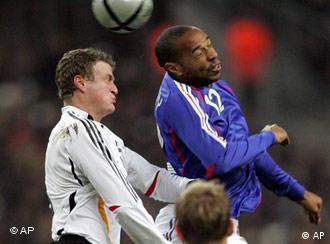 It's been a while since Huth had a German shirt on

If British Prime Minister David Cameron needs a model of successful integration for his latest immigrant-assimilation drive, he need look no further than Robert Huth. The native East Berliner is a man who has embraced the virtues of English football with every fiber of his 6' 3" frame.

The 26-year-old Huth - "the Berlin Wall" to his fans - is as English a central defender as Stoke City have ever had. In fact, he is so English that his two previous clubs - Chelsea and Middlesbrough - were too sophisticated and continental for him. It took Stoke, perhaps the most faithful disciples of the long ball, to facilitate his transformation to a goal-scoring machine. 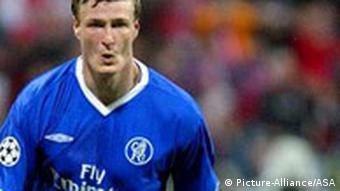 Huth did okay at Chelsea, but he did better at Stoke

When Huth stepped out onto the pitch at Wembley stadium on Sunday for Stoke's FA Cup semi-final against Bolton Wanderers, there were few ambiguities about his role: crunch into anyone who comes near his own penalty area, blast the ball away, and loom around the opposing area whenever his side win a set-piece.

The plan worked to perfection on Sunday: Huth scored. Trouble was, his goal might have been a bit too pretty - a long-range right-footed strike rather than the usual banged-in header in the box.

At Chelsea, where Huth came as an impressionable teenager a decade ago, he made 42 first team appearances, and never scored in a league match. At Middlesbrough from 2006 to 2009, he scored twice in 53 appearances. But now at Stoke, he's connected nine times in his two seasons so far, six times in his current barn-storming Premier League campaign - in which he has had more minutes on the pitch than anyone else in the squad.

This makes him the club's joint top-scorer this season, and the top-scoring defender in the Premier League. Indeed, his half-dozen puts him level with such celebrated attackers as Arsenal's Andrei Arshavin, Manchester City's Mario Balotelli and his former Chelsea team-mates Nicolas Anelka and Frank Lampard.

A different kind of beauty

So where are Huth's sponsorship deals? Probably held up in the mail. For sure, his goals are not the most aesthetically sophisticated, but they have their own grace. They are heavy metal goals - full-throttled "Kerrangs" hammered into the net off his flat, rectangular forehead, usually as he leaps onto a corner from the edge of the area.

His team-mate Rory Delap's long throw-ins - effectively corners if delivered from anywhere near the by-line - became infamous in the England's second division, the Championship, before Stoke re-entered the top tier of English football in 2008. Huth joined a season later, jumping ship from the relegated Middlesbrough, and has been instrumental in stabilizing Stoke's mid-table position - they are currently looking very safe in twelfth. 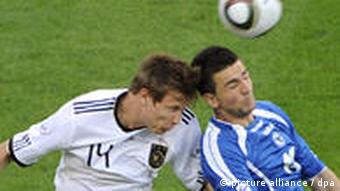 Huth's competition for the Germany squad have their own shortcomings

Thriving in the English rain

It's not difficult to see why Stoke has become Huth's natural home. The "Potters" have become the epitome of difficult English opponents. Their extremely physical style is predictable but difficult to play - they break up play at the back and launch it up the pitch. Who needs a midfield?

As erstwhile Sky pundit Andy Gray wrote in the Irish Daily Star newspaper earlier this season, "You hear about declining standards in England, but ... if Barca were playing Stoke on a wet Wednesday in January with Rory Delap launching Howitzers into the box, how would they cope?"

It might be a slight exaggeration to say that the specter of Robert Huth keeps Lionel Messi awake at night, but the German has forged a rare bond with Stoke supporters and with England in general. Ever since Chelsea scouts snapped him up from Union Berlin's youth team aged 16, Huth has played his entire senior career in England.

"He completely fit into the English style from the beginning," Gunnar Heidrich, who trained Huth through the age of 12 to 15 at Union Berlin told Deutsche Welle. "And he was totally accepted by them. So many different nationalities play in the Premier League, and Germans aren't especially loved there, but he has something British about him."

"What made him so successful in England were already his trademarks as a kid," Heidrich told Deutsche Welle. "His unbelievable will, his fight, his fearlessness."

"There were others who were a lot better than him when it comes to footballing skills - from the technical or tactical point-of-view," he added. "I saw so many youth players who I thought were more likely to make it. But as a complete package in the defense, he already had it all."

A Huth that doesn't suit Löw 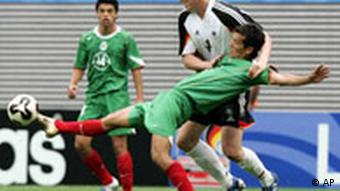 Huth is not one of the game's most subtle stylists

The significant gap in Huth's resume is his international career, which has stalled at 19 games (and two goals). He was picked for the 2006 World Cup by Jürgen Klinsmann, but passed over for 2010 by Jogi Löw, and has not played for Germany for two years.

Former friend and another Chelsea youth team player Sebastian Kneissl, finds this "unbelievable," but he has an explanation. "He's got a very English style - it's not like in Germany, where the central defender has to be the first playmaker," he said in an interview with sports website Spox.com. "Robert is not a playmaker, but a defender who wins his tackles rigorously."

But Heidrich thinks Löw might be missing a trick. "My personal opinion is that he could have been picked," he said. "He might have been stronger than some of the players that Löw picked instead."

As Heidrich points out, the defenders that Löw has chosen to take up the central positions recently - Mats Hummels and Holger Badstuber - are not exactly wizards on the ball either. Perhaps Huth's penchant for the English rain is keeping him off Löw's radar - or maybe some players just thrive in a team like Stoke.

After a routine Euro qualification win on Saturday, Germany are trying out a quartet of young Dortmund players for Tuesday's friendly against Australia. But do they have a chance of getting in the first team? (28.03.2011)

Joachim Löw will stay on as Germany coach at least until the 2014 World Cup in Brazil. This contract extension - dispelling rumors that he might be going to Bayern Munich - was quicker and less acrimonious than the last. (15.03.2011)

An under-strength Germany were held to a 1-1 draw in a friendly soccer international in China on Friday. The German team was missing 17 regulars from their squad. (30.05.2009)