Road to Indian Market Full of Potholes for German Retailer | Business | Economy and finance news from a German perspective | DW | 11.05.2006

Road to Indian Market Full of Potholes for German Retailer

German retail giant Metro beat heavyweight competitors Wal-Mart and Carrefour in the race to enter the lucrative Indian market three years ago. But it’s not been all smooth sailing for the group. 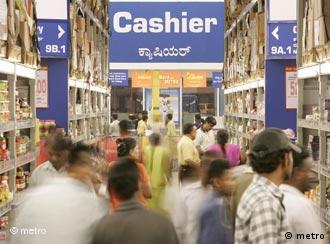 Metro may have tapped the vast Indian market, but it's hobbled by local restrictions

Metro's vast cash-and-carry store in India's IT capital Bangalore with its trademark blue and yellow logo looks like any other in Europe. The shelves are full of off-the-peg clothes, household goods and frozen seafood. 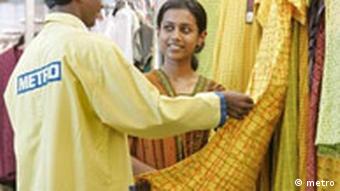 But in a country where more than 70 percent of the people are vegetarians, Metro's assortment suffers from a glaring lack of fresh fruit and vegetables.

The puzzling exception is explained by legislation in a few Indian states which prevents farmers from selling their wares directly to retailers. In the state of Karnataka too, of which Bangalore is the capital, most farm produce must be bought and sold at government-run markets through a complicated system of middlemen and farmers.

The result is not just a crippling financial disadvantage for Metro -- fruits and vegetables account for about 30 percent of trade turnover in India -- but also a lobby of local traders resentful of the foreign wholesaler.

"Yes, I've heard of Metro," said Nagesh Kumaran, a 36-year-old farmer selling tomatoes and fresh red chilies piled high on the grimy grounds of a chaotic fruit and vegetable wholesale market a few kilometers away from the sanitized environment of Metro. "All they want to do is to ruin us financially." 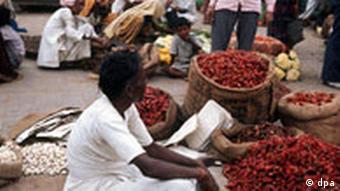 Metro, which buys 98 percent of its stock in Bangalore locally, denies this, arguing that it would offer farmers better margins by using modern methods of transportation and distribution.

"About 35-40 percent of fruits and vegetables rot in transit in India due to transport delays and inadequate cold storage. That also means lost money for farmers," said Harsh Bahadur, CEO of Metro India.

He remembers the traders even going on a week-long protest when the Metro group, one of the first foreign players to enter the Indian wholesale market with two cash-and-carry centers in Bangalore, first arrived in 2003.

"With 600 traders on strike for six days, there was no rice available in Bangalore. That's the kind of pressure the government is under when it comes to letting in a foreign company."

The dilemma is also representative of the bewildering minefield of central, state and local regulations that foreign investors eyeing India's booming economy and its fast-growing middle class have to deal with.

The country's retail sector in particular is governed by rules that still bar foreign direct investment. With more than 12 million small retailers in India and one in 25 families earning their livelihood in the sector, there are fears that an influx of foreign supermarket chains would drive millions out of business. 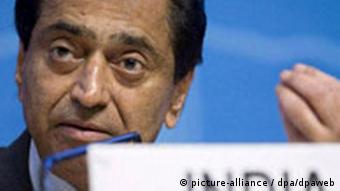 Recently the Indian government did allow foreign firms to hold up to a 51-percent stake in "single-brand" retail outlets. But Indian Trade and Commerce Minister Kamal Nath has admitted the government is no hurry to relax barriers in the retail market.

"We will open up one window after the after," Nath said. "Foreign investments in the retail sector must create jobs, not destroy them."

Metro's Bahadur says that Metro has also had to navigate a confusing array of differing regional laws, tax rates and customs duties when it comes to transporting goods from one state to the other.

The difficulty in buying land in India remains another huge deterrent. "Land titles are often not well-kept and disputed so there's confusion about the real owner," said Bahadur. 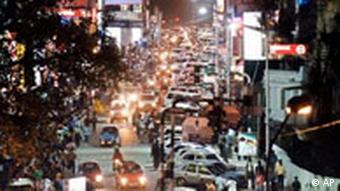 Traffic snarls and congestion remain a huge problem in Bangalore

In addition, political instability in the state of Karnataka has seen three governments come to power in the past three years, spelling doom for reforms and prompting Metro to look at other Indian states.

Worth all the trouble

Despite the stumbling blocks, Metro insists its initial investments of 35 million euros in India thus far have been worth it. It's also announced plans to open three more cash-and-carry centers with investments totaling 300 million euros ($380 million).

Given the sheer size and potential of the Indian market, that's hardly surprising. 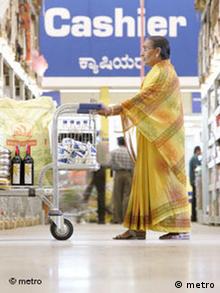 "Let's not forget that India has over 30 cities with more than one million inhabitants -- we want a Metro in every one of them," said Bahadur.

A recent study by the A.T. Kearney consultancy says India -- with a trade volume of $330 billion and a yearly growth rate of 10 percent -- is currently the most attractive place to invest for retail companies. Global players such as Wal-Mart are already knocking on the door, and even domestic giants such as Reliance have plans to invest $2.2 billion in supermarkets.

Head start will pay off

But Metro says its head start has given it an edge. Bahadur points out that real estate prices have doubled in the time since Metro set up shop and leased land in cities such as Calcutta and Hyderabad.

"It's true that you sometimes have to travel long thorny paths in India like Metro not being allowed to sell all-important vegetables, grains and pulses," said Hans-Joachim Körber, CEO of the Metro Group, at the recent Hanover industrial fair.

"But we're confident that in the end our efforts will pay off."

India's acute electricity shortage, at sharp odds to its booming economy, is a focus at the Hanover Industrial Fair this week. Delhi wants to drum up more German investment in the sector. (April 24, 2006)

EU and India Get Down to Business

A delegation of EU heavyweights led by British Prime Minister Tony Blair met with Indian leaders in New Delhi on Wednesday for talks aimed at strengthening trade and political ties with the emerging economic power. (Sept. 7, 2005)