Conservative Chancellor Angela Merkel's tax cuts are being criticized by her political rivals as unrealistic. Germany's political parties are trying to win voters' favor ahead of national elections in September. 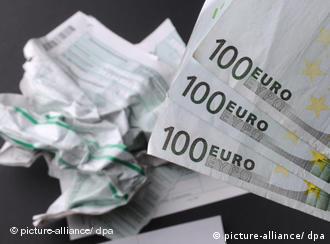 In the election program that Merkel's Christian Democrats (CDU) presented in Berlin on Monday, one particular issue has caused heated discussion: tax cuts.

He warned that "Merkel is either trying to pull the wool over the voter's eyes, or there really is no sound concept behind the whole thing."

He said that the CDU's election program did not contain ideas on how to shape the country's future. With the country's budget set for a record deficit, any promise to lower taxes was simply "unrealistic."

He criticized the plan as "spineless" for not including a timetable outlining when the tax cuts would kick in. The FDP are traditional allies of the Christian Democrats and would likely be Merkel's preferred coalition partner after September's national elections.

The opposition Greens also called the program a grab bag of policies, while the Left party called the tax cuts implausible. 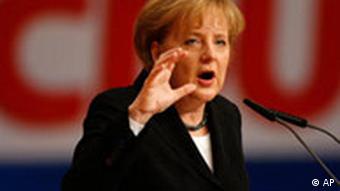 Members of Merkel's Christian Democratic Union (CDU) and their Bavarian sister party, the CSU, have defended the program.

On Sunday delegates from the Christian Democrats and the Bavarian CSU agreed that tax cuts should be the cornerstone of their re-election campaign and should be introduced at some point during the next legislative term.

The two parties, however, failed to agree on a date for the cuts, to the dismay of the CSU, which wanted to see the measures introduced by 2011.

Yet there had been resistance to the plans even from within the conservatives with two of the Christian Democrat's state premiers arguing in favor of a tax increase.

In a show of unity, Germany's Left gears up for national elections