Two people were killed in Argentina on Friday as looters broke into supermarkets in several cities. Clashes with police have stirred memories of the country's devastating economic crisis 11 years ago. 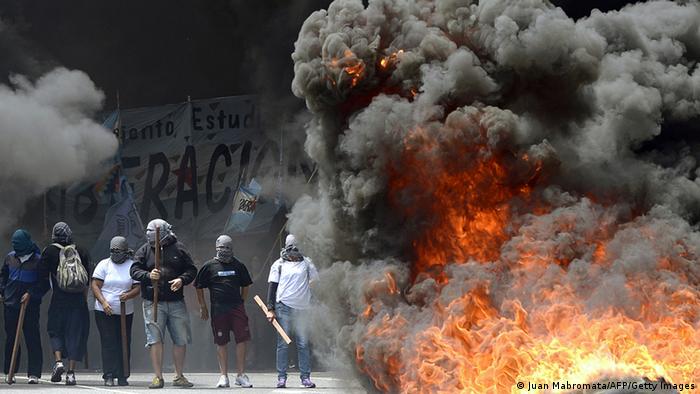 Police fired teargas and rubber bullets to stop dozens of stone-throwing youths from looting a supermarket owned by French retailer Carrefour near the capital, Buenos Aires, a day after the unrest erupted in the Patagonian ski resort of Bariloche.

Government officials condemned the violence and sent 400 military police to the southern city, where raiders stormed a supermarket owned by the local unit of Wal-Mart and made off with flat-screen televisions and other goods.

Officials said looters were apparently venting anger over a blackout that had left much of surrounding Neuquen province without power on Wednesday.

The violence also spread to the central city of Rosario, a hub for industry and farm exports, where the two people were killed, and to the northern province of Chaco.

Matias Drivet, a Rosario city hall official, said one person was stabbed and another shot dead as crowds raided stores, most of them owned by Chinese immigrants, on the outskirts of the northeastern city.

About 250 people were arrested in total in four different provinces and police battled to avert fresh incidents in the urban sprawl that encircles Buenos Aires.

"When you see that they're taking flat-screens, you know it's not hunger," said Daniel Scioli, governor of Buenos Aires province and an ally of President Cristina Fernandez.

Fernandez often contrasts the country's current economic stability with the 2001/02 crisis that plunged millions of Argentines into poverty and unleashed a wave of looting for food in supermarkets.

She was re-elected by a landslide just over a year ago, but her approval ratings have since plunged due to sluggish economic growth, surging prices, and middle-class anger over currency controls and her combative style.

Fernandez's administration blamed the violence on opposition trade union leaders, who rallied in the capital this week to demand wage rises and lower taxes due to double-digit inflation.

"There are elements in Argentina that want to provoke havoc and violence and stain our holiday season with blood," national security secretary Sergio Berni said. "Argentina is not the same as it was in 2001."

Meanwhile, in an unrelated issue Argentina's foreign ministry has submitted a formal protest against Britain's decision to name a vast swath of Antarctica as Queen Elizabeth Land. The complaint rejects Britain's claim of the land calling it "imperialistc ambitions going back to ancient practices."