Usain Bolt has completed an unprecedented third-straight Olympic sprint treble after Jamaica stormed to victory in the 4x 100 meters. The triumph followed the Jamaican's wins in the 100 and 200 earlier at the Rio Games. 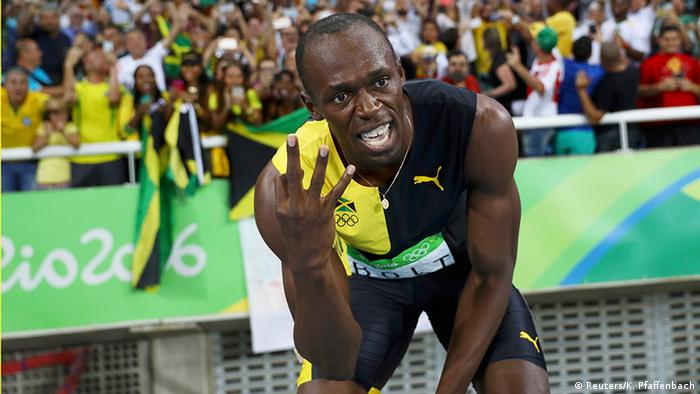 Usain Bolt has achieved his dream of a triple treble having led Jamaica to victory in the 4x 100 meters relay at the Rio Olympics.

He cruised down the home straight to seal the glory ahead of surprise silver medalists Japan and the United States in third. The US were later disqualified and Canada elevated to bronze. Bolt had been level with the Japanese at the last baton change.

"The pressure is real. I look at it as accomplishment. I live for these moments, it is beautiful and I came through," Bolt told reporters.

"It is a brilliant feeling. I told the guys if it didn't happen tonight I would beat them up."

The 29-year-old has said this is his last Games, meaning the Olympic movement is now losing its arguably biggest ever star.

But he went out on a high, ably assisted by Asafa Powell, Yohan Blake and Nickel Ashmeade.

Bolt started his record bid with a 100 meters triumph on Sunday, destroying the opposition including former doper Justin Gatlin.

He followed up with 200 success on Thursday, running 19.78 seconds to finish comfortably ahead of his Canadian rival Andre de Grasse.

He was disappointed not to threaten his world record of 19.19 in the 200, and such are his high standards, he personally might see the Games as a failure.

But his millions of adoring fans know they have been witnessing sporting history in the making, history that will probably never be matched. He is a freak, but a wonderful freak.

The Olympics produce some of the best moments in sports. As the world's elite athletes gather in Tokyo 2020, so do the best photographers to capture all of the action. Take a look at the most iconic moments.

India defeated Germany in the bronze medal match to win its first medal in men's field hockey in 41 years. German Florian Wellbrock won the marathon swim to add to his medal count. Follow the latest from Tokyo with DW.