Germany had to do without suspended captain Philipp Lahm and get beyond a host of distractions in their WC qualifying against Ireland in Dublin. They did that in style with a 6-1 win. 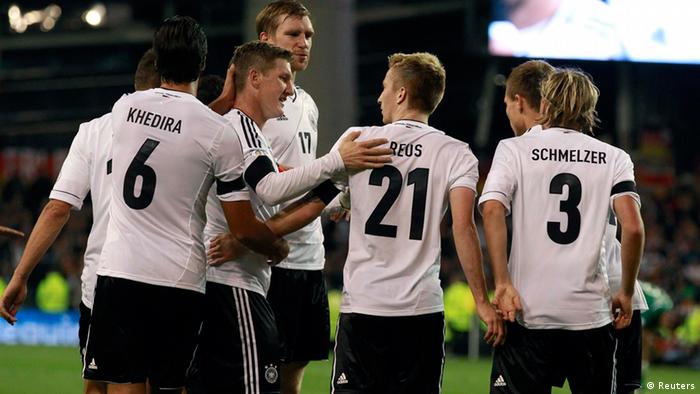 Things were less than harmonious for the Nationalelf ahead of their trip to the Emerald Isle. Acting captain Bastian Schweinsteiger complained of a lack of team spirit within the German national team, a jibe implicitly aimed at playmaker Mesut Özil.

And Bayern President Uli Hoeness opined that the team was far too nice to win titles, a barb explicitly targeted at Germany coach Joachim Löw, who reacted in something of the fashion of a rooster whose feathers had been mildly ruffled.

With Germany massive favorites against the Republic of Ireland, there wasn't much Löw's men could really do to disprove Hoeness' accusation. And they got off to a commensurately diffident start.

The first 30 minutes were literally devoid of highlights as Ireland kept 10 men behind the ball and Germany looked baffled about how to find away through the hosts' defense. At that point, the most notable aspect of the match was a bizarre bagpipes rendition of the German national anthem before kickoff. 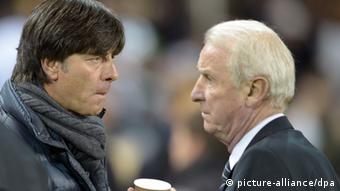 Löw's substitutions were better than Trapattoni's

The lull was broken on the half-hour mark as Marco Reus went down a bit too easily in the box and saw yellow for his efforts.

Only a minute later, though, it was Reus breaking the ice. Much-criticized left back Marcel Schmelzer won the ball on the edge of the penalty area and found his Dortmund teammate who hammered it under the crossbar.

And Reus was back at it in minute 39 as Germany caught the Irish out on a counterattack. The 23-year-old collected a long pass from Jerome Boateng and rifled it home from the left channel.

And it only took about three minutes for the latter move to backfire. Defender Keith Andrews brought down Miroslav Klose in the box. Mesut Özil was ice-cold from the spot.

The outcome was beyond any doubt, but Germany weren't done. Ireland's will was broken, and their defensive discipline dissolved. Schweinsteiger found Klose, who struck from a tight angle to make the score 4-0. 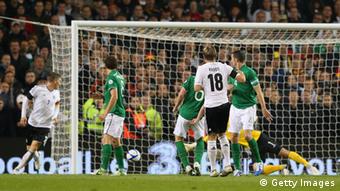 Kroos also got in on the act

On the hour mark, Kroos pounded one in. It was the first time Ireland had conceded five goals at home since 1953.

And in minute 82, Kroos completed the scoreline with a fine bending shot from just outside the penalty area.

Ireland were left rubbing their behinds, but they did at least get a consolation goal thanks to Andrew Keogh on a corner on the very last play of the game. It was a more than convincing win against a side that kept a lot of clean sheets as of late, and the result keeps Germany's record a perfect three of three in Group C.

"I think we’re on the right track," Schweinsteiger told reporters after the match, referring to his critical remarks earlier in the week. "But I do think we have to take that one final step to be able to win a title and beat a team like Spain. That’s all I wanted to say."

Ireland, of course, are not the side Germany want to measure their skills against, and Löw won't have been thrilled by the passivity he saw in the first half hour.

But the 30 minutes that followed should keep Hoeness at bay - for a while at least.

Depleted but not dejected, Ireland seek to shock

Ireland's squad is even more heavily depleted than Germany's going into Friday's World Cup qualifier in Dublin. But the Irish haven't given up hope, knowing that they're up against a misfiring German side. (11.10.2012)

Ireland has always been a difficult opponent for the German team. But coach Joachim Löw is confident that Germany will manage to solve the problems in the defense and come home with a victory on Friday. (11.10.2012)