Reunion island wreckage identified as from a Boeing 777

Malaysian authorities have confirmed plane parts that washed up on an island in the Indian Ocean are from a Boeing 777. Officials are confident the wreckage is from missing Malaysian Airlines flight MH370. 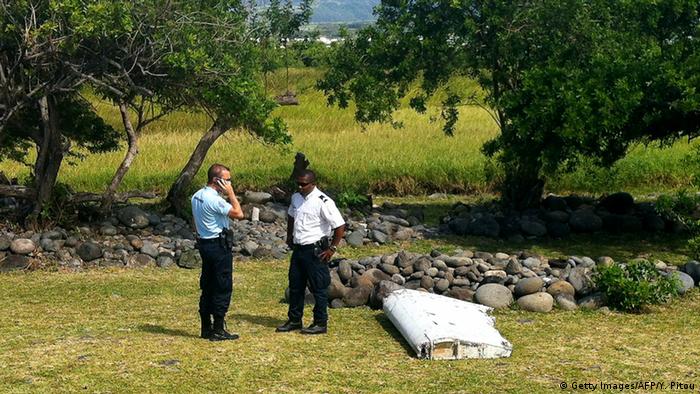 The piece of airplane wing that washed up on shore of the French island of Reunion could provide the first tangible clue of what happened to Malaysia Airlines flight MH 370, which mysteriously disappeared in March last year with 239 people on board.

"I believe we are moving closer to solving the mystery of MH370," Malaysia's deputy transport minister, Abdul Aziz Kaprawi, told the AFP news agency. "This could be the convincing evidence that MH370 went down in the Indian Ocean."

Part of the recovered piece of wing found on the island bears the part number "657 BB," according to photographs taken of the debris.

"From the part number, it is confirmed that it is from a Boeing 777 aircraft. This information is from MAS (Malaysia Airlines)," the minister added.

Martin Dolan, chief commissioner of the Australian Transport Safety Bureau, which is leading the search for the missing aircraft, said clarity on the origin of the debris should be confirmed "within the next 24 hours."

"We are increasingly confident that this debris is from MH370," Dolan added.

The debris is being sent to France for further testing and is expected to arrive on Saturday.

French officials said on Friday that analysis of the debris, including a suitcase discovered near the flaperon, would begin on Wednesday. 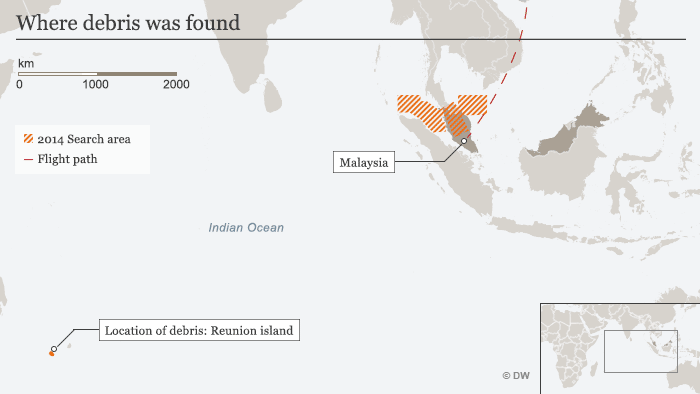 Earlier on Friday, Australia's transport minister said the discovery of a piece of an airplane wing on the island of Reunion would indicate that the search for Malaysia Airlines Flight 370 is on the right track.

"We remain confident that we're searching in the right place, and if in fact the plane parts found on Reunion island are linked to MH370, that would rather strengthen the case that we are in the right area," said Warren Truss.

MH370 vanished without a trace on March 8, 2014, with 239 people on board. The last primary radar contact placed the aircraft over the Andaman Sea, around 370 kilometers (230 miles) northwest of the Malaysia's Penang. The 2-meter (6-foot) section of a wing was discovered on the island of Reunion is around 5,600 kilometers away from Penang and more than 5,500 kilometers away from the current international search area.

"The fact that this wreckage was sighted on the northern part of the Reunion island is consistent with the current movements" that would come from the search area, Truss added.

After a piece of an airplane wing washed up on shore on the French island of Reunion in the Indian Ocean, investigators are increasingly confident the part is from the Malaysian Airlines plane that vanished last year. (31.07.2015)

Malaysia's prime minister has said on his blog that debris found on Reunion island is "very likely to be from a Boeing 777," the same model of the missing MH370. Malaysia has sent a team to France to investigate. (30.07.2015)

Investigators have been dispatched to Reunion island to find out if debris came from missing Malaysian Boeing 777. No verified trace of the plane has been found since it mysteriously disappeared last year. (30.07.2015)