Researchers have unearthed the earliest known fossil evidence of an insect of the butterfly order. It reveals that these animals fluttered about 200 million years ago – even before flowering plants came along. 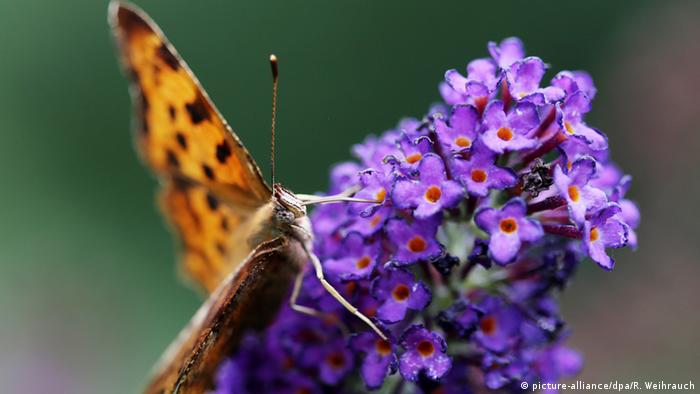 200 million years ago, butterflies didn't look like this. And flowering plants didn't exist at all.

Imagine a brightly yellow-colored butterfly landing on the back of a Tyrannosaurus rex. Well it may have happened. But, okay, this picture is only partly true.

Indeed, it is true that animals of the order Lepidoptera – including butterflies and moths – co-existed with the dinosaurs.

The latest evidence shows that these flying insects evolved more than 200 to 250 million years ago in the Triassic period. That's also when the first dinosaurs appeared.

That means that moths and butterflies are much older than previously thought.

So, what's wrong with the picture we painted at the start?

Well, back then butterflies were unlikely to have been a bright yellow. It's thought they were not brightly colored at all. They were a browny-grey, more like a moth than a butterfly of today.

"The colorful butterflies that we think are so beautiful came much later," Bas van de Schootbrugge of Utrecht University, Netherlands, tells DW. "They evolved only after dinosaurs became extinct." 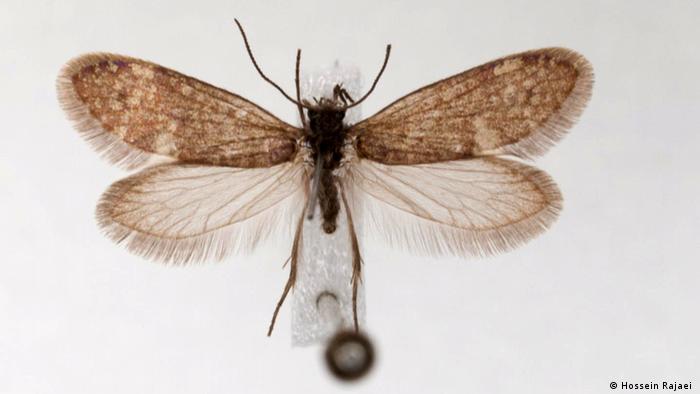 A living representative of a primitive moth. A new study suggests they existed 200 million years ago

But no matter which color the fluttering insects were – the discovery that they are older than previously thought has a major implication.

It challenges the modern scientific theory that flowering plants and the insects that feed on them evolved together.

Until recently, scientists believed that moths and butterflies, whose descendants still exist today, came into being 130 million years ago – that's the age of the oldest fossil evidence ever found.

But when Bas van de Schootbrugge and his team had a closer look at a drilled core from northern Germany dating back about 200 million years, they were stunned.

"It took us quite a while to realize what these particles actually were," says van de Schootbrugge. It took several years of dedicated work by his student, Timo van Eldijk, and the support of insect-fossil experts, to solve the puzzle.

Butterfly and moth fossils often remain unrecognized, because they are so rare, says Sonja Wedmann, paleontologist and research associate at the Messel pit near Frankfurt am Main, Germany.

Wedmann was not involved in the van de Schootbrugge / van Eldijk study. But she explains that because butterfly wings are good at repelling water "they tend to float on a lake instead of sinking to the ground."

And that's why such particles tend to quickly decompose rather than fossilizing and remaining intact for millennia to come. 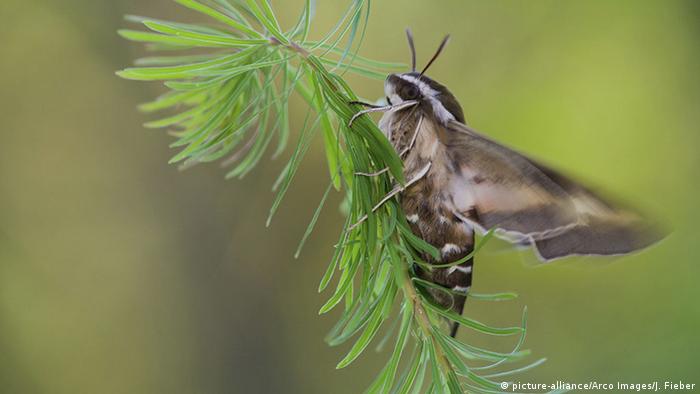 Moths and butterflies belong to the same animal order. Moths are simply not as colorful

The concept of co-evolution on trial

Until now scientists believed that flowering plants evolved first, and were only then followed by butterflies and moths.

But the Dutch group's new interpretation of the research suggests the theory is wrong: they say the feeders came first and the plants came second. It's a revolutionary thought that leads Sonja Wedmann to call the study "really special."

"How flowering plants evolved from seed-producing plants is one of the big mysteries in evolution," says van de Schootbrugge, "and our discovery opens new doors to this mystery."

While flowering plants didn't exist, butterflies and moths probably fed on some non-flowering, seed-producing plants, such as conifers.

Maybe – and van de Schootbrugge stresses that it's just a maybe – these plants tried to lock in their nectar, which they need for reproduction, to stop the butterflies and moths feeding on it, and that's possibly how, or why, they evolved into something completely new: flowering plants.

That certainly would be a revolution in evolution theory. It would show that – at least in evolution – not everything that appears logical is necessarily true.

Magic of the monarch

Meet a virtuoso pilot, as light as a feather that follows its instincts to land in woodlands thousands of kilometers away. (04.09.2017)

All about the birds and the bees...

All they want to do is feed on sweet nectar or other delicacies. But at the same time, they pollinate flowers and thus enable plants to reproduce. There's more to these little creatures than meets the eye. (18.08.2016)