Results of Austrian presidential vote too close to call

Direct ballots have been counted but absentee votes are still to come from Austria's run-off vote for a president. Far-right leader Norbert Hofer and former Greens politician Alexander Van der Bellen are neck and neck. 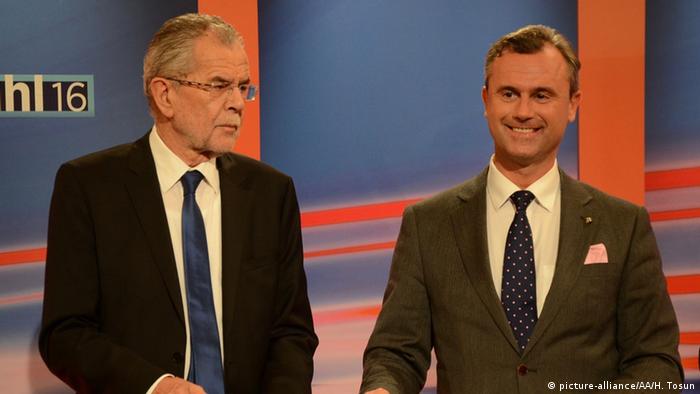 Nearly 700,000 absentee ballots are still to be counted Monday, making them the likely decider following the 4.48 million people who voted directly on Sunday.

Final projections that included the still-to-be-counted absentee ballots put each candidate at 50 percent, with Van der Bellen narrowly ahead.

While the presidential role is mainly ceremonial, there are key powers within the constitution which give the president the right to sack the government and to dissolve parliament.

The final results are due at the earliest on Monday evening.

Hofer's Freedom Party wants to close the landlocked country's borders and campaigns consistently on strong anti-European Union sentiment. In moderating his comments on Sunday, Hofer was reported to have told foreign reporters that he was "really OK," and "not a dangerous person."

Hofer has threatened to dismiss Austria's government coalition of the Social Democrats and the People's Party if it fails to do a better job. He has presented himself as the final arbiter of how the government is performing.

Van der Bellen's supporters back liberal refugee policies and a strong, unified EU. As he went to vote on Sunday, he was asked what differentiated him from his opponent: "I think I'm pro-European and there are some doubts as far as Mr. Hofer is concerned."

Van der Bellen said he would not swear in a Freedom Party chancellor - even if the party won the next elections, which are due within two years.

Major cities in Austria have a history of voting for left-leaning parties. With issues like immigration trending highly amid Europe's ongoing refugee crisis, it is to be expected that urban and rural voters might likely differ.

Candidates backed by the long-dominant Social Democratic and centrist People's Party were eliminated in the first round vote which was held in April.

"I find it very strange that a right-wing populist received 50 percent in a runoff," said Bernd Fabritius from the Christian Social Union - the Bavarian sister party to Angela Merkel's Christian Democrats.

He added that the initial results show "reckless behavior at the polls."

Social Democrats in Europe must make clear that they will not accept "intolerance and xenophobia" Ralf Stegner told the newspaper group.

On the other hand, politicians from Germany's own right wing AfD (Alternative for Germany) party welcomed Hofer's success at the polls, saying his FPÖ party will play a leading role in the future.