When "Trucker Heinz" got dumped by his girlfriend, he turned to one of Germany's 21 autobahn churches for a little heavenly help. 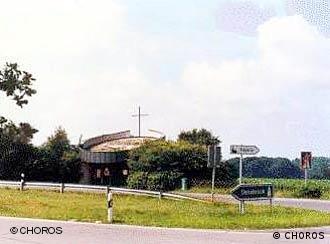 The ecumenical autobahn chapel Dammer Berge on the A1.

Instead of pulling out a candy bar at rest stops, more and more German travelers are ditching vice in favor of God. Germany's habit of conducting roadside religious rituals is unique in Europe.

The first thing you see when you exit the autobahn at the rest stop in Medenbach, just down the A3 from Wiesbaden, is the glass ceiling and bare cement wall of the first autobahn church in the state of Hesse. After buying a roll with rissole from the snack bar next door, you can enter into the sparsely decorated worship room of the chapel and browse the prayer book. It includes entries from people like "Trucker Heinz," who is praying for his girlfriend Gabi to come back to him.

Germany's 21 autobahn churches and chapels are a great place to take a little time out for reflection. Truckers, tourists and commuters visit them regularly to pray for help or even just a safe trip home. Between 300,000 and 500,000 people visit autobahn houses of worship in Germany each year, estimates theologian Gereon Vogler, who runs the Internet site www.autobahnkirchen.de. The site provides a virtual overview of these houses of God – from the ecumenical autobahn chapel at the roadside cafe Dammer Berge on the A1 to the Catholic autobahn church: "Maria by the Wayside."

Between 1985 and 2002, 17 churches opened their doors on German autobahns – signaling the emergence of a new trend combining two popular German pastimes: Fahrvergnügen and church. They range in size and scope from chapels hidden behind gas stations to historic community churches located just a few kilometers from the autobahn exit.

"Since reunification, more and more communities in eastern Germany are combining business with pleasure," says Vogler. As a part of that trend, a number of run-down village churches have been renovated and converted into autobahn churches.

Vogler believes the popularity of autobahn churches is a unique product of the German psyché. He says he knows of only a few such churches in France and Italy. Yet despite Germany's clear leadership in connecting drivers with God on the autobahn, neither the Catholic nor the Protestant church here has appointed any officials to oversee the roadside churches and create new ones.

The whole phenomenon began in earnest back in 1958 following a private initiative undertaken after a major traffic accident. The family of an Augsburg paper factory was involved in an accident on the A8 between Munich and Stuttgart, and the family then donated a piece of land and the building that later became the first Catholic autobahn church: "Maria, Protector of Travelers." One year later, the first Protestant autobahn church opened in Exeter on the A2.

The tradition has been continued by communities and regional organizations. Roadside churches have become such a phenomenon that students have even written their university theses on the subject.

In his 219 page thesis, Gereon Vogler took an empirical look at autobahn church and chapel visitors. According to his findings, the classic autobahn church visitor tends to be Catholic, female and middle-aged. Numerous commuters also seek deeper religious meaning in the chapels.

"Instead of institutionalized religious services, many people are looking for silent prayer," Vogler says. Many who would rather sleep in on Sundays rather than go to mass, often find themselves feeling suddenly alone and helpless on the autobahn – and for them, a roadside church can often bring comfort.

That may have been what brought Trucker Heinz to Medenbach. And maybe, just maybe, Gabi's returned to him by now.