West Berlin's most famous landmark and a poignant reminder of the horrors of war is threatened by collapse. Now a range of people, including soccer players and former enemies, are trying to preserve it. 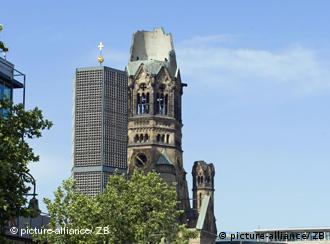 The ruined tower stands taller than the church's modern reincarnation

When the Kaiser Wilhelm Memorial Church was destroyed by a British bombing raid in World War II, all that remained was its gaping, ruined tower. Still, Berliners protested plans to demolish the blackened, badly shattered belfry, which rises almost 70 meters (230 feet) over the western part of the city.

The spire of the church, which was built in 1895 by Kaiser Wilhelm II to honor his grandfather, Kaiser Wilhelm I, is now nicknamed "Hollow Tooth" by locals and was preserved for posterity. It has remained a famous and poignant reminder of the horrors of war, as well as being a symbol of West Berlin's determination and extraordinary post-war recovery, during the time when it was surrounded by communist East Germany. 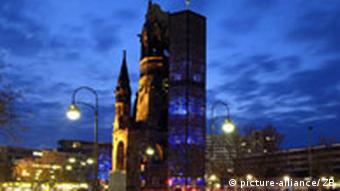 The area around the church is still Berlin's major shopping district

But now the gaunt and jagged church tower, which every year attracts thousands of tourists, is making news of another kind. Located at the downtown end of the Kurfuerstendamm shopping boulevard, the tower is in a dire state of decay. Traffic vibration along the famous strip, say city officials, has caused its walls to crumble, with chunks threatening to fall off onto pedestrians below.

Earlier the church authorities put the cost of repairing its neo-Gothic facade at 3.5 million euros ($5.1 million), but now due to continuing disintegration the cost has soared to 4.1 million euros.

The Kaiser Wilhelm Memorial Church Foundation has in recent years raised 500,000 euros in a "rescue the tower" campaign. The Berlin city government a year ago pledged 1.5 million euros to

the repair fund, with the city's development senator, Ingeborg Junge-Reyer, stressing the "great symbolic significance of the old church tower for the city."

Hertha BSC, the top Berlin football club, has also got involved. The club and the Kaiser Wilhelm Memorial Church have something in common: the church was built from 1891 to 1895, and the soccer club was founded in 1892.

Hertha manager Dieter Hoeness has confidently predicted the club will be able to raise a five-figure sum for the fund, but Hertha's own finances are shaky at present, with the club deeply in the red. 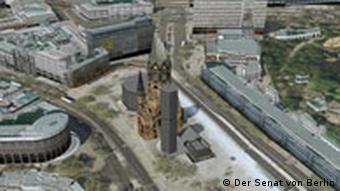 Even Google Earth has a 3-D model of the church

Charles Jeffrey Gray, 85, a former British pilot who carried out bombing raids over Germany, was one of the first to call last year for the rescue of Berlin's most famous wartime ruin, contributing 500 British pounds (634 euros, $930) to help spur the campaign.

"The tower must remain as a reminder for future generations of the horror of war," Gray said. He fired off a letter to Wolfgang Kuhla, chairman of the memorial church management board, urging that everything possible be done to save the tower.

Gray's last bombing raid over Berlin was in February 1944. Around that time 500 to 700 planes were involved in raids over Germany, a reprisal for earlier nightly operations over London by German bombers.

Last November the ex-pilot and his wife Joan, 87, accompanied by their son Stephen and his 56-year-old German-born wife Gerlinde, flew to Berlin to participate in a fund-raising concert attended by Chancellor Angela Merkel.

It was held at the stained-glass modern chapel built in 1961 flanking the ruined tower on the Breitscheid Platz, and was, said Gray, a "very moving occasion." The Brandenburg Gate is Berlin's most famous landmark

During the 1960s, the unusual octagonal concrete and glass construction became a symbol of defiance against communist oppression.

Marko Rosteck, the Berlin urban development office spokesman, concedes "the tower is badly damaged," and says the authorities are very much interested in seeing that "one of Berlin's most important symbols is preserved."

The church authorities, buffeted by financial setbacks in the past decade due to a major slump in church tax income, have been alarmed recently by a surveyor's report on the fragile state of the building, which also houses a small museum.

Kuhla, who has appealed to German Culture Minister Bernd Neumann for financial assistance, talks of the ruin being the most "significant memorial for reconciliation in Berlin and possibly in

"When we check our finances early next spring we hope enough money will be there, so that a start can at last be made on the repairs," he said.

What's Left of the Berlin Wall

On Aug. 13, 1961, East German workers began erecting the infamous Berlin Wall, which would separate the city in two halves for more than 28 years. Take a look at what's left of the wall nearly two decades after its fall. (12.08.2008)

A protestant parish is trying to raise money to restore the Martin Luther Memorial Church in Berlin -- and its National Socialist ornamentation -- as a memorial to the victims of the Nazis. (21.04.2006)