A protestant parish is trying to raise money to restore the Martin Luther Memorial Church in Berlin -- and its National Socialist ornamentation -- as a memorial to the victims of the Nazis. 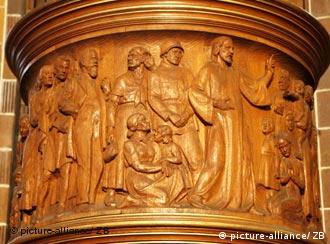 Jesus, a German soldier and an Aryan family adorn the pulpit

The imposing Martin Luther Memorial Church in Mariendorf, south Berlin, looks like many others built in the 20th century, with its brick and stone Bauhaus-style exterior. But the last surviving Nazi-era church in Germany is also a place where pastors preached from pulpits adorned with Aryans, and babies were baptised in a font featuring carvings of a Nazi storm trooper.

In fact, the National Socialist link is clear from the outset. In the lobby, an iron cross chandelier illuminates the busts of Martin Luther and Field Marshall Paul von Hindenburg, Germany's famous World War I commander. Church officials believe that there was initially a likeness of Adolf Hitler -- after whom the church was supposed to be named. 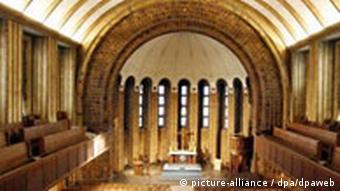 The swastikas have been removed

In the main part of the church, stained glass windows framed by a stone arch face pews for 800 worshipers and a giant organ. The organ was first used at National Socialist rallies in Nuremberg in 1935 -- the year the church was opened and two years after Hitler came to power.

The huge stone archway has friezes on its square panels. Images of crosses and other religious symbols are next to those of workers, soldiers, eagles and some blank panels -- the swastikas were removed because they are illegal in Germany.

The altar features a Jesus that could have been a body builder.

"Everything is about power, strength and victory," said Ilse Klein, a historian who works at the church. “They are clearly fascist symbols.”

The church was originally designed in 1928 before the Nazis seized power. It was in continuous use until two years ago, when the stability of the tower was threatened and tiles began falling off.

The parish has been lobbying the government of Berlin and the Protestant church organizations for the 3.5 million euros they need to rebuild. But there are hundreds of churches in Germany in need of money and the city of Berlin is practically broke. 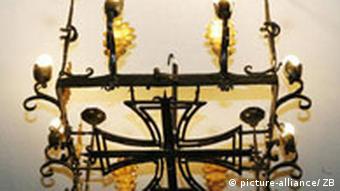 The Nazis tried to force churches to take on their ideology

As a result, the parish leaders hope to get historical designation from the city so that they can then apply for funds set aside for historical landmarks from foundations. And though they don’t plan to use the church again for regular services, they hope to hold special ceremonies, concerts and exhibitions marking anniversaries such as the liberation of Auschwitz concentration camp on Jan. 27, 1945.

“It was the times,” said Klein. “But it is not common anymore to see politics illustrated inside of a church so clearly. That is why we want to save it -- to remind people this should never happen again.”

Many Nazi-era buildings have been preserved and are still in use today. Berlin's Olympic Stadium, for example, was designed by Hitler’s favorite architect, Albert Speer in 1936, and the Nazi’s central bank is now used by the foreign ministry. But the church presents a trickier problem because it clearly shows that churches collaborated with the Nazis more than is commonly acknowledged.

Initially, the Catholic Church cooperated with Hitler after Pope Pius XI signed a treaty with him in 1933. But that collapsed in 1937 when Hitler began putting Catholic clergy on trial after the pontiff issued a statement of concern because of years of Nazi interference. 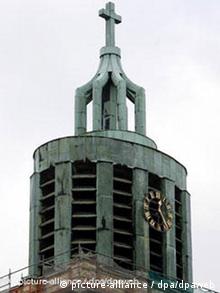 The tower needs to be structurally stabilized

Meanwhile, Hitler appointed Ludwig Müller as the Reich's Bishop to lead a movement of Protestant National Socialists called the “German Christians,” also known as the “Storm troopers of Jesus.” Soon after, Hitler tried to force Protestant churches to join the Reich's Protestant Church, which promoted an “Aryan Jesus” and wanted to replace the bible with "Mein Kampf."

Neither the Protestant or the Catholic Church officially opposed the Nazi policies towards Jews.

As parishioners were increasingly turning towards National Socialism, some church officials gave in so that they could keep their churches intact and help others such as members of the Confessional Church, organized by dissident Protestant clergy.

“They preached inner resistance and said that was better than being jailed,” said Klein. “Some people were even braver.”

People such as Pastor Max Kurzreiter of the Martin Luther Memorial Church who helped people being persecuted by the Nazis. He married the writer Jochen Klepper and his Jewish wife Johanna in the church in 1938 -- something that was illegal at the time. Klepper, his wife and daughter killed themselves in 1942 rather than face deportation. Their story is among those documented and on display for visitors to this unique church.