Report Says Begin Was Behind Adenauer Letter Bomb | Germany | News and in-depth reporting from Berlin and beyond | DW | 13.06.2006

According to a report in a German newspaper, Israeli leader Menachem Begin was behind an attempted assassination of German Chancellor Konrad Adenauer in 1952. 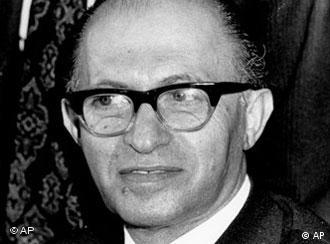 More than 40 years after the act in question, one of the perpetrators says Begin -- who later became Israeli prime minister, and who shared the Nobel Peace Prize with Egypt's Anwar Sadat in 1978 -- masterminded and funded an assassination attempt against Germany's chancellor, Konrad Adenauer, in 1952.

According to the Frankfurt Allgemeine Zeitung (FAZ), which cited German journalist Henning Sietz in the matter, Begin organized and funded a letter bomb sent to Adenauer, in an attempt to scupper Holocaust reparation agreements that were being negotiated between Germany and Israel at the time. 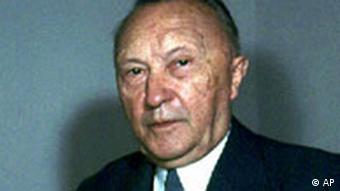 Adenauer, here in a 1957 photo, escaped the terror attack

Sietz wrote a book in 2003 on the conspiracy-like politics behind the event titled "Assassination Attempt on Adenauer: The Secret History of a Political Attack." The book narrowed down the identities of the suspected assassins but did not prove them. Now, Sietz cites new material -- a book published in a limited edition by Eliezer Sudit, who was an Israeli nationalist activist at the time and one of the co-perpetrators of the attack.

Sudit's book, a memoir of his days in the armed underground Zionist movement Irgun, names Begin as the creative and financial force behind the assassination plot. A package bomb addressed to Adenauer exploded in the basement of the Munich police headquarters, killing a postal employee. Around the same time, letter bombs exploded at the building near The Hague where Israeli and German representatives were discussing postwar reparation accords.

As a conservative parliamentarian in the late 1940s and early 1950s in Israel, Begin vehemently opposed the Reparations Agreement between West Germany and Israel, claiming that it was tantamount to a pardon of Nazi crimes against the Jewish people. He was even barred from the Knesset, or parliament, after he led a demonstration against the accord that led to a violent outburst of stone-throwing in which numerous parliamentarians and policemen were injured.

Later in his career, as Israeli prime minister, Begin negotiated the Camp David peace accords with Egyptian President Anwar Sadat. In 1978 the two of them were awarded the Nobel Peace Prize for their work.

"This is a German Story"

In an interview with DW-WORLD.DE, US historian Timothy Naftali says Germans should pressure their own government to receive more information on the role of Nazis in German government after 1945. (June 9, 2006)

Merkel: Israel's Right to Exist "Must Never be Questioned"