Reports by French scientists into Yasser Arafat's death have ruled out polonium poisoning. The results contradict earlier findings by a Swiss lab, and mean it's still unclear what killed Arafat nine years ago. 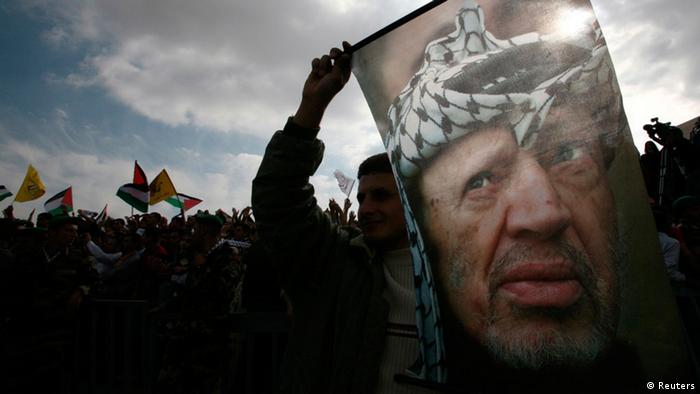 As part of an inquiry into the former Palestine Liberation Organization leader's death, French investigators had Arafat's remains exhumedand ordered genetic, toxicology, medical, anatomical and radiation tests on them. His wife, Suha Arafat, and her lawyers received the results on Tuesday only to learn that they conflicted with an inquiry by a Swiss lab.

"You can imagine how much I am shaken by the contradictions between the findings of the best experts in Europe in this domain," Suha Arafat, dressed in black and reading from a written statement, told a news conference in Paris. "I am accusing no one," she added. "This is in the hands of justice and it is just the beginning."

Scientists from several countries have tried to determine whether radioactive polonium played a role in Arafat's death in a French military hospital in 2004. Palestinians have long suspected Israel of poisoning him, which the country denies.

After a 2012 report that researchers had found traces of radioactive polonium on the Palestinian leader's clothing, Suha Arafat filed a legal complaint in France seeking a murder investigation, which remains ongoing. The French experts found traces of polonium in their examination, but came to "diametrically opposed conclusions" from the Swiss about the substance's provenance, Suha Arafat's lawyer Pierre-Olivier Sur said Tuesday.

Arafat, who signed the 1993 Oslo interim peace accords with Israel, died at age 75in a French hospital in November 2004 after falling illwhile eating a meal weeks earlier. At the time, doctors said he died of a stroke and had a blood-clotting problem, but records proved inconclusive as to what had caused that condition. However, they performed no autopsy.

Twenty years ago, a step toward Mideast peace?

With all eyes on Syria, attention has shifted away from the other major flashpoint in the Middle East: the peace talks between Palestine and Israel. Twenty years after the Oslo Accords, that peace is still elusive. (13.09.2013)

In November, Israeli President Shimon Peres, who shared the 1994 Nobel Peace Prize for signing the Oslo Accords with Arafat and then-Israeli Prime Minister Yitzhak Rabin, had called the reports of polonium poisoning unbelievable.

"If someone had wanted to get rid of Arafat, it would have been easier to do it with a bullet," Peres said.

Rabin was assassinated by a hard-line Zionist in 1995 over his negotiations with Arafat.

This represents just the latest in a string of recent expert reports on Arafat's death. After the Swiss lab found in November that Arafat had probably died of polonium poisoning, a Russian report given to Palestinian officials proved inconclusive as to polonium's role. However, both the Swiss and Russian reports found that Arafat had died of toxic substances - not natural causes.

In the most famous example of polonium poisoning, the former Russian spy Alexander Litvinenko died after drinking cup of tea in a London hotel in 2006.