Report: Half of Germany′s Military Planes are in Shambles | Germany| News and in-depth reporting from Berlin and beyond | DW | 06.11.2007

Report: Half of Germany's Military Planes are in Shambles

According to the business daily Handelsblatt, over half of Germany's Transall military transport planes are unsuitable for long hauls. That leaves an ever smaller fleet to fly soldiers to and from Afghanistan. 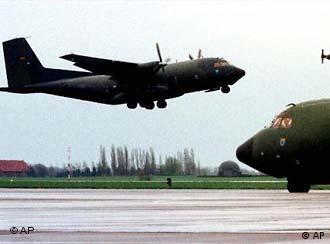 Transalls are so popular among pilots, they've been dubbed "angels of the sky"

The Handelsblatt quoted aviation industry sources as saying that corrosion and wear and tear have turned over half of Germany's Transall planes into decrepit machinery. The sources apparently said that it was becoming more difficult to locate spare parts for the planes, some of which are more than 40 years old.

The paper also reported that a number of planes have been grounded due to rust problems and some are beyond repair.

The German defense ministy has partially denied the report, the Handelsblatt wrote. 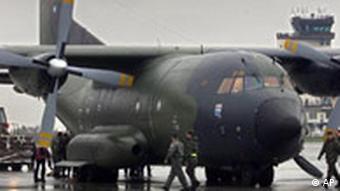 A Transall at Ramstein base in Germany

Germany had originally planned to replace the remaining Transall planes with Airbus' new A400M model by 2014, but that schedule may have to be revised due to recently announced delays in delivery.

The German government has ordered 60 of the Airbus models at a cost of 8.6 billion euros ($12.4 billion).

Until they are delivered, the Transalls remain the sole military transporters, and must run flights to the Balkans and Afghanistan. Germany has some 3,000 soldiers serving in the NATO-led force in Afghanistan.

Three German soldiers and their Afghan interpreter were slightly injured in an explosion while on patrol west of the northern Afghan city of Kunduz, according to a statement from the German military. (05.10.2007)

What do you think about the state of the Transall planes? Send us an e-mail. Please include your name and country in your reply.