Remembering the Theorist of the Banality of Evil | Culture| Arts, music and lifestyle reporting from Germany | DW | 14.10.2006

Remembering the Theorist of the Banality of Evil

A political theorist with a flair for controversy, Hannah Arendt was one of the greatest thinkers of the 20th century. Oct. 14 marks the 100th anniversary of her birth. 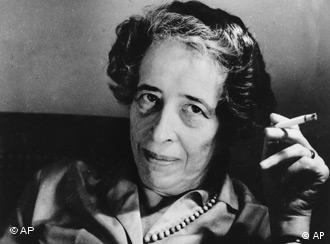 In her work, Hannah Arendt grappled not only with the nature of totalitarian power and banality of evil, but also with the possibility of individual political action.

"When you are attacked as a Jew, you have to defend yourself as a Jew," Arendt said in a 1964 television interview. "Not as a German or a citizen of the world, but very concretely. What can I do?"

Hannah Arendt was born in 1906 in Hanover. She studied philosophy in Marburg with Martin Heidegger, one of the most famous and most controversial German philosophers of the 20th century. The unusually gifted student and her married professor had a brief and difficult love affair. Eventually, Arendt left Marburg for Heidelberg and finished her dissertation with another renowned phenomenologist, Karl Jaspers, in 1928.

After Heidegger became the first National Socialist rector of the University of Freiburg, Arendt -- who after the war testified on Heidegger's behalf before a denazification committee -- turned to political activism. She worked for the German Zionist Organization and researched anti-Semitic propaganda. In the summer of 1933, she was arrested, but subsequently released.

An intellectual in exile 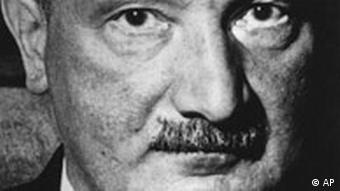 Arendt didn't like to be described as a philosopher because her work centered on the fact that "men, not Man, live on earth and inhabit the world." Although no stranger to sweeping historical generalizations, Arendt was less interested in grand philosophical schemas than in the ways in which individual destinies interact with universal principles.

In 1933, Arendt fled to Paris. There she met her future husband, philosopher Heinrich Blücher. Together, Blücher and Arendt emigrated to the US in 1941.

Arendt's career took off in New York. She wrote for various journals -- including Jewish Forntier and Aufbau (Reconstruction), worked as a lecturer and became active in the German-Jewish community.

Her epochal work, "The Origins of Totalitarianism," appeared in 1951, followed by several other books, including "Vita Activa," a theory of political action, and "Of Revolution," in which she discussed radical political changes.

The banality of evil 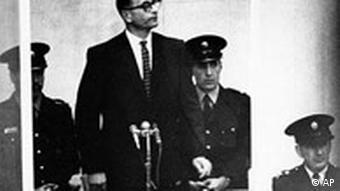 In 1963, Arendt published "Eichmann in Jerusalem," her account of the trial of Nazi criminal Adolf Eichmann. Eichmann was one of the chief executioners of Hitler's "final solution" for the extermination of the Jewish people. He had been captured by Israeli agents in Argentina and put on trial in Israel.

The book and Arendt's theory of the banality of evil provoked a firestorm of controversy with some critics saw as an attempt at downplaying the Nazi crimes and the suffering of the Jews.

"People hold one thing against me, namely that I can still laugh," Arendts said. "And, in a way, I can understand it. But I really always thought that Eichmann was a clown. I have read the 3,600 pages of his police interrogation and I did it very closely. And I don't know how many times I laughed out loud! People hold this against me."

According to Arendt, evil does not originate out of hatred or perverse pleasure in inflicting pain or suffering. Evil, Arendt argued, is essentially banal. It emerges out of the absence of the imaginative capacities that make the human and moral dimensions of our activities tangible. 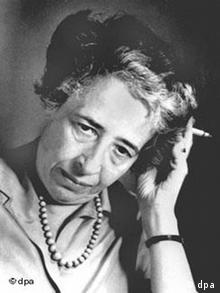 Arendt was convinced that Eichmann -- "the man in the glass booth" whom she described as being "not even sinister" -- failed to exercise his capacity for thinking and judgement, which resulted in his inability to imagine himself in the role of his victims. Arendt couldn't see any traces of the demonic wrongdoing or deviant sadism in the man who organized the transport of the Jews to the death camps. Instead, she painted the picture of a petty bureaucrat who followed his orders, unthinkingly but efficiently.

"The deeds were monstrous, but the doer ... was quite ordinary, commonplace, and neither demonic nor monstrous," Arendt wrote.

Arendt died on Dec. 4, 1975. She never stopped believing in the possibility of political action in a shared public world based on the relations of reciprocity and solidarity.

"The risk of going public seems clear to me," she wrote. "One exposes oneself in public as a person. The second risk is that we start something; we get entangled in a net of relationship. We never know what will come out of it. Finally, I'd say that this risk is possible only with trust in other people."

If revolution is indeed "the sex of politics" -- as American critic H.L. Mencken once called it -- Berlin became for a day the capital of a new kind of revolution: glamorous, digital and corporate-funded. (10.09.2006)

Conservative German historian Joachim Fest, the author of two influential books on Adolf Hitler, died at the age of 79 on Monday. Fest was considered Germany's foremost historian on the Third Reich. (12.09.2006)