Remembering the First Wave of Boat People in Germany | Germany | News and in-depth reporting from Berlin and beyond | DW | 03.12.2003

Remembering the First Wave of Boat People in Germany

Twenty-five years ago, the first Vietnamese "boat people" arrived in Germany after risking death in a daring flight from home. News of their plight caught international attention, triggering an outpouring of sympathy. 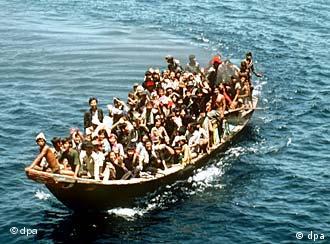 25 years ago a rarity, today all too common -- rickety boats packed with desperate immigrants

The 644 people arrived by plane in Hanover on December 3, 1978. They were among the 2,500 Vietnamese boat people who had been given the chance to go to West Germany. The 208 families had drawn the winning lots -- and made up the largest group of refugees to ever come to Germany from such a remote region.

Today the image of emaciated immigrants packed into a hardly seaworthy vessel has become an all too common sight in Europe. But 25 years ago the plight of the first boat people captured the attention of Germany and motivated people here to undertake previously unheard of action to help the refugees.

The boat people had braved a two-month-odyssey on an overcrowded craft in the South China Sea to escape from communist rule at home. But their boat, the Hai Hong, was unable to dock because no country in southeast Asia wanted the survivors. The neighboring countries were already harboring some 60,000 Vietnamese refugees in camps and more were not welcome.

The tide turned when television coverage of the living conditions on board the Hai Hong was broadcast throughout the world. In an outpour of sympathy, West Germany and some other Western countries said they would take in the refugees.

Shortly thereafter, the plane of Vietnamese was greeted by Ernst Albrecht, the premier of Lower Saxony, in Hanover. "We know what kind of suffering lies behind you, and we feel with you," he said. "You have come to a country where you can live freely, without being oppressed by anyone. You don’t need to be afraid, but instead can start your new life with courage and optimism."

Not one of the newly-arrived spoke German. 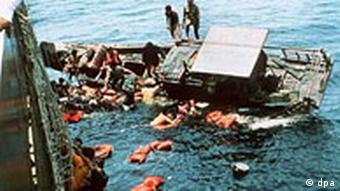 The mass-exodus of so-called "boat people" began in the aftermath of the Vietnam War, when more than one million Vietnamese ended up in so-called “re-education camps.” Seventy percent of those seeking asylum belonged to the Chinese minority in Vietnam. Their traditional dominance in private enterprise did not tally with the communist regime’s vision. Many of the Chinese fled to southern China. Others saw the only refugee boots as the only alternative.

Germany took in a total of 35,000 refugees from southeast Asia in 1978 and the subsequent years.

While the boat people were greeted with sympathy in many places, there was also a good deal of disgruntlement. The boat people were the first group of immigrants to come from outside of Europe, and many people were skeptical about whether they would fit in. A conservative politician in early 1979 even suggested they should be sent back to southeast Asia, where the United Nations and the forerunner of today's European Union should lease a stretch of land for them to live on.

Others, however, showed their willingness to help. Two Cologne companies donated 1,000 airflights to bring the refugees to Germany. And in many cities, German families agreed to accommodate the Vietnamese in their homes.

The boat people's plight also led to the foundation of one of Germany's best known relief organizations, Cap Anamur. The group, established by Christel und Rupert Neudeck, rescued boat people from turbulent waters, gave them medical care and sensitized German society to their plight. Cap Anamur has projects today in war and crisis regions throughout the world, including Afghanistan, Iraq and Chechnya.

As yet another shipload of illegal migrants is discovered off southern Italy, the pressure increases on EU states to resolve the migration issue (Oct. 22, 2003).

The dreadful state of affairs in Afghanistan seems to have been forgotten, unlike the reconstruction of Iraq, which is currently in the news. For this reason Deutsche Welle and the relief organization Cap Anamur created the fundraising campaign "100 Classrooms for Afghanistan."

Long famous for its markets, Tangier is now home to a camp that illustrates a darker side of trade: human trafficking. It's a station for sub-Saharan Africans seeking a better life in Europe. But many never make it (July 3, 2003).