Remembering Sinti and Roma Holocaust Victims | Germany| News and in-depth reporting from Berlin and beyond | DW | 16.05.2004

On the sixtieth anniversary of a Sinti and Roma revolt in Auschwitz concentration camp, German President Johannes Rau on Sunday said more should be done to keep the memory of these heroes alive. 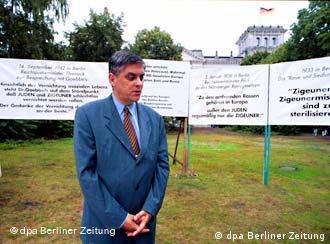 Romani Rose near the future memorial site for Sinti and Roma.

On May 16, 1944, about 6,000 Sinti and Roma in Auschwitz had resisted orders to get on trucks that would take them to the gas chambers. Armed with improvised weapons made out of tools, they hid in their barracks and eventually managed to get SS officers to abandon the transport.

About 3,000 of those participating in the revolt were later sent to other concentration camps where some of them survived. The others, mainly women, children and older people, were murdered. Altogether, the Nazis deported about 23,000 Sinti and Roma from eleven European countries to Auschwitz.

Sixty years later, Sunday's ceremony at the German foreign ministry in Berlin for the first time didn't just focus on the extermination of Sinti and Roma under the Nazis, but also highlighted the desperate courage camp inmates displayed in resisting their murderers, said Romani Rose, the chairman of the Central Council of German Sinti and Roma.

Calls to speed up erection of memorial

Rose added that the German government should act swiftly and build a proposed memorial for Sinti and Roma Holocaust victims near the parliament building and the Brandenburg Gate.

It will be situated near the memorial currently under construction for Jewish Holocaust victims as well as a third memorial that will be erected to honor homosexuals who perished under the Nazis.

"We're calling on you to no longer delay the erection of the memorial," Rose told the audience that also included German Foreign Minister Joschka Fischer.

Rau responded by strongly criticizing any attempts to suppress, deny or play down the genocide of Sinti and Roma. 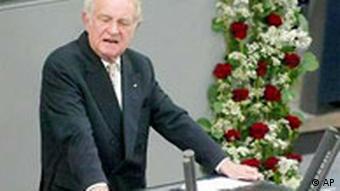 Rau during a speech in the German parliament

"You stood up against barbarianism in Germany's darkest hour and thereby held on to the inviolability of human dignity," Rau (photo) said, addressing Auschwitz survivors in the audience. "For that, you deserve our respect and that's why your courageous behavior should be much better known than it is today."

Referring to the continuing discrimination many of Europe's 8.5 million Sinti and Roma still face today, Rau said everything should be done to prevent this.

"If the inconceivable is not to happen again, we have to make sure in our daily lives that people from different backgrounds, different religions and different cultural traditions live together with esteem and respect," Rau said.

After years of delays, Berlin's controversial Holocaust memorial designed by Peter Eisenman moves into a crucial phase this weekend. (Aug. 17, 2003)

In a decision that’s been called “long overdue,” the German parliament has approved plans to build a memorial for thousands of homosexual men persecuted or killed by the Nazis. (Dec. 15, 2004)

Documentation and Cultural Centre of German Sinti and Roma

More information on the situation of Sinti and Roma in Germany