Remembering Armistice Day | Europe | News and current affairs from around the continent | DW | 11.11.2004

From the rolling fields of France's Somme Valley to capitals around the world, veterans and political leaders will pause Thursday to remember the fallen of World War I, the first truly global conflict. 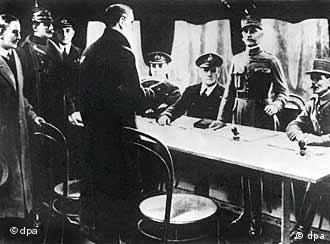 World War I was officially ended aboard a train

What was to have been the war to end all wars -- but which was in reality only the prelude to the next -- officially ended at the eleventh hour of the eleventh day of the eleventh month in 1918, six hours after the signing of the armistice in Compiegne, northern France.

Eleven in the morning is still a solemn moment in the many countries that were dragged into the conflict, largely fought out in Western Europe, although only a handful of centenarians are alive to tell the tale.

The ceremonies taking place across the world Thursday will also honor the dead of other conflicts, some of which -- Iraq being the prime example -- are still going on. 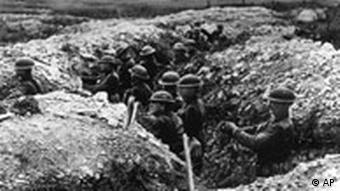 United States Army troops stand in the trenches in France during World War I.

In Britain, Armistice Day has been a tradition since King George V issued a proclamation in 1919 that, "All locomotion should cease, so that, in perfect stillness, the thoughts of everyone may be concentrated on reverent remembrance of the glorious dead."

Two minutes of silence are observed around the country on Nov. 11, but the main ceremonies have been shifted to the second Sunday of the month, when Queen Elizabeth II, accompanied by about 9,000 veterans, will lay a wreath at the Cenotaph, an empty tomb in the center of London.

On Thursday though, two World War II aircraft will drop 1.3 million poppies over London at 6 p.m. while bridges along the Thames river will be lit up in red every night until Sunday. 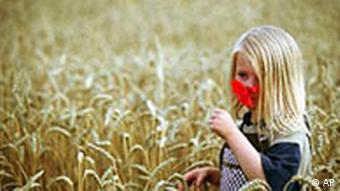 Most Britons wear a red poppy to symbolize flowers blowing on the fields of Flanders. The poppies are sold to raise funds for veterans groups, which have rejected attempts to introduce white poppies as a symbol of peace.

In the United States, which counts almost 25 million veterans, President George W. Bush was to lay a wreath and give a speech at the main public event at the Arlington national cemetery, while the Stars and Stripes will fly and bugles sound elsewhere in the country.

Thursday is the 50th anniversary of Veteran's Day, which then US president Dwight D. Eisenhower proclaimed in 1954 to replace Armistice Day as an event intended to honor all servicemen and women, present and past.

Religious ceremonies are scheduled at many of the cemeteries in France and Belgium.

In Belgium, the first country to bear the brunt of the war, King Albert II was to preside at a ceremony in front of the tomb of the unknown soldier, and an Indian army delegation will attend another at the town of Ypres, scene of some of the bloodiest fighting of WWI.

The last Belgian veteran from the war, Cyriullus-Camillus Barbary, died two months ago in the United States at the age of 105. 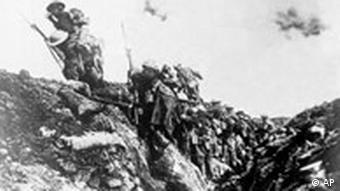 British troops go over the top during trench warfare at an unknown battlefield in Europe during World War I.

President Jacques Chirac of France was to lead a traditional wreath-laying ceremony at the Arc de Triomphe in Paris, escorted by some 2,200 troops and police.

Later, Defense Minister Michele Alliot-Marie was to preside over a ceremony in the Compiegne forest where the armistice was signed.

Fifteen French veterans from what is known as the Great War remain alive.

A special poignancy for Poland

For Poland, the day has special poignancy. It marks not only the end of the war, but the beginning of its own independence after 130 years of shared rule between Russia, Prussia and Austria-Hungary.

Wreath-laying ceremonies and parades are planned both in Poland and in its near-neighbor Latvia, and in Prague, mayor Pavel Bem was to unveil a memorial to Czech and Slovak soldiers who fought abroad in World War II.

Remembrance ceremonies were scheduled as far afield as Hong Kong, Australia and New Zealand, which proportionately lost more men than any other country.

Jack Edwards, the 86-year old chairman of the Hong Kong branch of the Royal British Legion veterans' group, said events in Iraq made this year's ceremony all the more poignant. 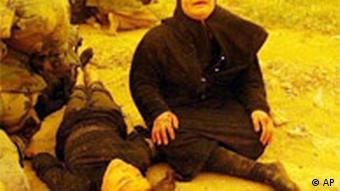 A mother cries over an injured child in Iraq in 2003.

"It is just as relevant today as it has ever been because there are still poor bloody souls being sent out to fight that damn war," said Edwards, who fought in France and Malaysia and was taken prisoner in Singapore.

In Wellington, the remains of an unidentified soldier will be entombed at a national memorial, New Zealand becoming one of the last of the participants in WWI to create a tomb of an unknown soldier.

There is no official ceremony in Germany, which lost the war, or in Russia where the bloodletting was an important contributing factor in the 1917 revolution.

Ninety years ago this weekend, the first, confused steps were taken to Europe's first bloody war of the 20th century. Not only would the Great War kill millions, it planted the seeds that would eventually start WWII. (Aug. 1, 2004)

Tuesday marked the 15th anniversary of the fall of the Berlin Wall, but Nov. 9 had been an important date in German history long before. Since 1848, at least four other significant events took place on that day. (Nov. 9, 2004)

Aug. 1 marks the 90th anniversary of Kaiser Wilhelm II's declaration of war against Russia. But the role of imperial Germany in unleashing the horrors of World War I continues to divide historians nearly a century later. (July 29, 2004)