Rescue crews have been deployed to provide relief from the worst flooding to strike southern India in 100 years. Volunteers and companies are filling the gap in an outpouring of solidarity. 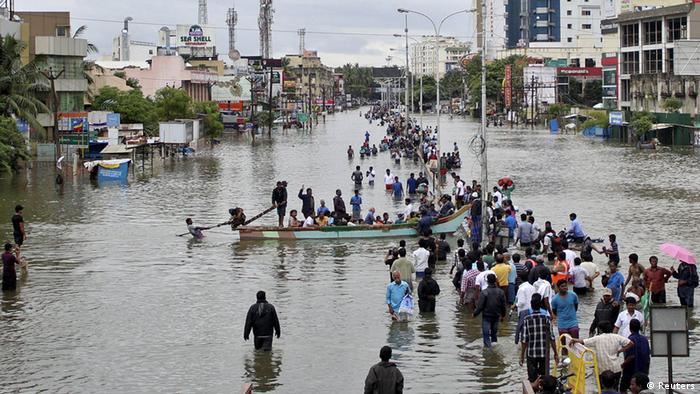 Thousands of stranded residents in Tamil Nadu are struggling to deal with the flooding as citizen volunteers bolster relief efforts across India's fourth largest city, Chennai, a center of auto manufacturing and the IT sector.

"Chennai has become a small island. This is unprecedented," Home Minister Rajnath Singh told parliament. "Rapid rescue and relief is the need of the hour. We are working very hard to restore normality."

The floods have cut off at least 3 million people from basic services, with reports of food and water becoming scarce. At least 5,000 houses have been inundated with water.

The government has deployed the military, police and rescue services, who have rescued at least 40,000 people. On Thursday, a navy warship with inflatable boats, supplies and diving equipment arrived in Chennai and the navy called on fishing boats to help in rescue efforts.

To avoid electrocutions, the state government cut power to parts affected by flooding. 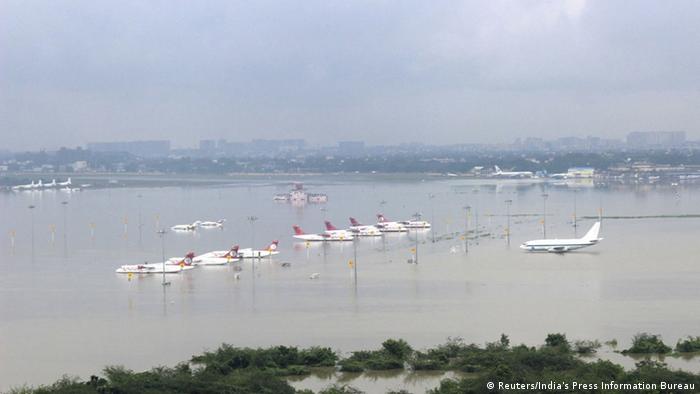 The runway at Chennai's airport remains underwater and all flights have been canceled until at least Sunday, as the Indian Air Force attempted to rescue 750 stranded travelers. Train services have also been canceled, and hundreds are holed up at the train station without basic services.

"We want to do everything, but the problem is beyond our control. The airport is flooded, train networks have collapsed and the weather is still not conducive," Home Ministry spokesman K.S. Dhatwalia said in New Delhi.

Rainfall was light on Thursday after a downpour of 345 millimeters (14 inches) of rain struck the area earlier in the week. India's meteorological service predicted additional rainfall of 100-200 millimeters (4-8 inches) through Sunday.

The monsoon season hits India from June to September every year causing flooding, but the October to December period has the heaviest rains in the coastal regions.

Prime Minister Narendra Modi, who traveled on Thursday to Chennai to observe operations, blamed the flooding on climate change before attending a climate change summit in Paris earlier this week.

With large parts of the city already underwater, a reservoir near Chennai overflowed and submerged new areas overnight, further hampering rescue efforts and giving no relief to the city.

The flooding has come with an outpouring of support from residents and volunteers, including cooking food and providing accommodation to those affected.

As a center of India's high-tech industry, volunteers and companies in Chennai have used social media to crowdsource information to locate, provide basic necessities to those most affected and notify relief crews.

Facebook has activated its Security Check feature that allows users to say they are safe, while Twitter has acted as a source of organizing and information sharing.

Google India has also activated an emergency feature that provides help line numbers, a crowdsourced list of places and people providing shelter, crowdsourced information on flooded streets and other resources.

Some 200,000 residents of Tamil Nadu state in India have had to flee their homes in the worst monsoon rains in a century. Prime Minister Modi has mobilized army and naval rescue teams. (02.12.2015)