The famous Cologne Cathedral got a special altar, a recovered refugee boat from Malta, for the feast of Corpus Christi. Outspoken Cardinal Rainer Maria Woelki criticized Europeans for turning a blind eye to suffering. 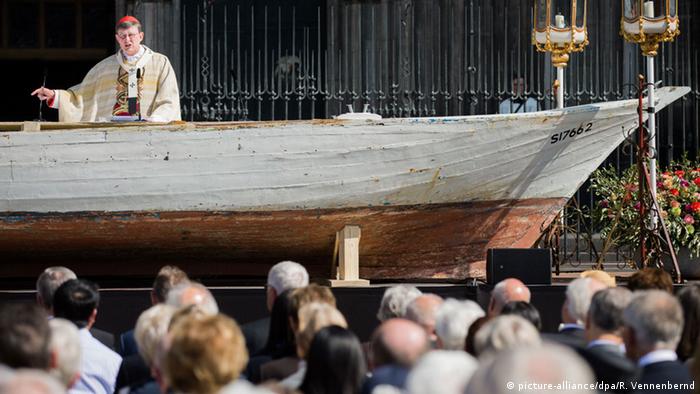 Cardinal Rainer Maria Woelki, who is also archbishop of Cologne, made a statement during the Feast of Corpus Christi on Thursday as he stood at a refugee boat that survived the treacherous Mediterranean crossing to Europe. Woelki, one of the highest-ranking Catholics in Germany, used the occasion to criticize the ease with which Westerners dismissed the suffering of migrants to Europe who had fled war and poverty.

"Whoever lets people drown lets God drown," said Woelki in front of the famous Cologne Cathedral. He added that "to see those in need and help them is the task the Lord has given to us as Christians."

The cardinal stood in a seven-meter-long (23-foot-long) boat recovered in Malta as part of a wave of refugees that saw more than 1 million migrants arrive in Germany in 2015. According to Woelki, the UN refugee agency has recorded 3,327 refugee drowning deaths in the Mediterranean in the past year.

On Thursday, Italian authorities said a capsized boat of the coast of Libya left dozens dead.

Woelki has been outspoken about the treatment of refugees since the crisis began. The day before his Corpus Christi sermon, he criticized a deal between the EU and Ankara for the relocation of migrants back to Turkey. He called the deal, pushed for by German Chancellor Angela Merkel, "disgraceful."

Before leading the faithful in the traditional Corpus Christi procession, Woelki recalled the one made by Cologne's Catholics in 1945 as their city lay in ruin, and called it a warning to those gathered not to turn a blind eye this time just because the conflict was farther away. "God's love," he said, outlasted "all changes of history and human need."

Germany's SPD has unveiled plans for a new law to "better control" the immigration of skilled workers. The news follows the approval of a new integration law which seeks to ease access to the labor market for refugees. (26.05.2016)

Merkel: 'Not concerned' about future of EU-Turkey migrant deal

German Chancellor Merkel has said the migrant deal agreed by the European Union and Turkey will go ahead as planned. Her comments come in response to threats by Ankara to nix the agreement over a visa-free travel row. (25.05.2016)