Reformers want pope to talk about alleged abuse cases | Germany | News and in-depth reporting from Berlin and beyond | DW | 08.03.2010

Child molestation scandals at several German Catholic schools have prompted Catholic reformers to call on Pope Benedict XVI to account for his term as bishop in Bavaria between 1977 and 1982. 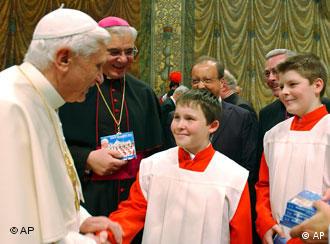 A spokesman for the "We are the Church" movement, Christian Weisner, said the pope should publicly state exactly what he knew about widespread allegations of abuse by clerics in the Bavarian city of Regensburg during the 1960's.

"From 1977 to 1981 Joseph Ratzinger was the bishop of Munich and Freising, so he must answer the question about what he knew then and what he did about it," Weisner told news agency DAPD.

The statement followed revelations that the renowned German boys choir, the "Regenburg Domspatzen," had received reports of sexual abuse dating back to the 1960s.

Director and composer Franz Wittenbrink, who attended the choir's boarding school in the 1960s, told newsmagazine Der Spiegel of a "sophisticated sytem of sadistic punishments wrapped up in sexual desire." Wittenbrink said the boarding school's director at the time would "come into the dormitory at night and pick out two, three of us boys to take back to his apartment."

Pope Benedict's brother, Professor George Ratzinger, has headed the boys choir since the 1960s. Ratzinger told the Italian newspaper "La Repubblica" that he knew nothing about cases of child abuse.

The Vatican has said that it will back an investigation. 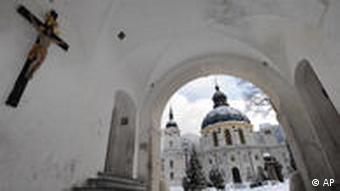 Minors were allegedly abused at the school in Ettal

German Education Minister Annette Schavan told the mass-circulation newspaper Bild am Sonntag that there should be "zero tolerance" for sexual abuse of children and announced she would meet with education officials in the coming week to discuss concrete measures to prevent abuse in the future.

"Violence and abuse of schoolchildren is the worst breach of trust imaginable. It makes me livid," Annette Schavan said.

"Wherever there is a suspicion of abuse or violence against children in schools, there must be zero tolerance and a complete explanation. Nothing must be hushed up," added the minister.

She also told the Passauer Neue Presse that she supported extending the statute of limitations for sexual abuse.

The scandal in Germany broke in January when an elite Jesuit school in Berlin admitted the systematic sexual abuse of its pupils by two Roman Catholic priests in the 1970s and 1980s.

The Jesuit order has said that so far around 120 people have come forward alleging abuse.

Meanwhile, a report into alleged past abuse at a monastic school in Ettal, near the Swiss border, said that minors "were massively abused over decades, sexually, physically and psychologically" by several monks. And on Sunday new accusations came to light against a nun at an orphanage in Berlin who allegedly molested children throughout the 1950s and 1960s. The nun withdrew from the order in 1986 .

The chairman of the German Bishops' Conference has said he was "deeply shocked" by a child sex abuse scandal in Roman Catholic schools and asked for forgiveness from the victims. (22.02.2010)

In light of a growing number of child sex abuse cases at schools in Germany, Education Minister Annette Schavan has called for 'consequences.' (07.03.2010)