Reeling from the floods, Bosnians′ anger surfaces | Europe| News and current affairs from around the continent | DW | 07.07.2014

In the aftermath of the worst floods in more than a century in Bosnia and Herzegovina, authorities have been slow and inadept in providing help to families who lost their livelihoods. 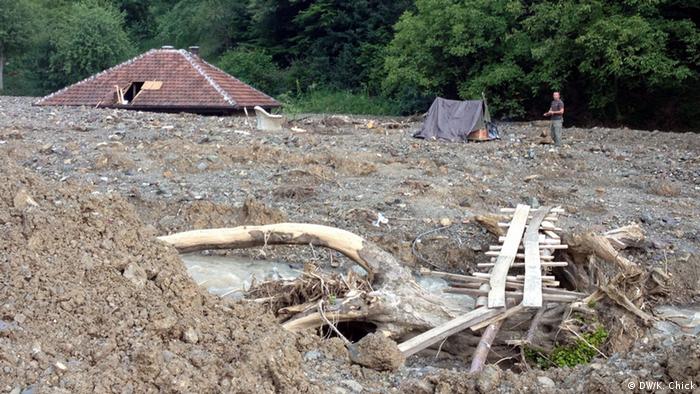 It's been a month and a half since the mud swallowed Idanavic Sadeta's house. Her home used to be a three-story dwelling in this once picturesque valley of raspberry farmers. But in the middle of May, the tiny nearby river began to swell after days of torrential rain. It grew until it resembled a tidal wave filled with mud, rocks and debris. The mud poured into her house, and around it, and kept pouring into the valley until the ground level had risen to the third story of her house. It destroyed her brother's nearby home. It pushed another brother's home 1,200 meters down the valley.

She, her parents, and her brothers are living in a tent pitched on the now-expansive mud flat next to what remains of her home. Most of her possessions are destroyed. They have no electricity, and no running water except the river.

Now they're wondering where they go from here, and why their government seems to be doing little to help them. Last week, along with many of their neighbors from the village, they began protesting in the nearby town where the local government is situated, asking, at the least, for a place to live until they can rebuild their lives.

"So far nobody actually helped us," says Sadeta, a 38-year-old mother of two. "We made our living from agriculture, and we had a decent life before this. Now we have nothing, and we're praying to God for someone to help us. I have no idea how to continue my life." 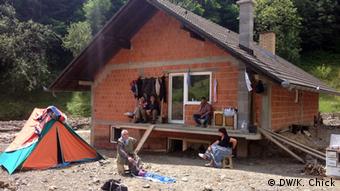 The slow response to the worst floods in more than a century in Bosnia and Herzegovina illustrate the dysfunction of the government here, where the complicated state structure provides a convenient excuse for inaction. In the village of Zeljezno Polje, local officials say they are waiting on action from higher levels of government. Officials of the state's two entities, the Serb-majority Republika Srpska and the Federation of Bosnia and Herzegovina, populated by Bosniak Muslims and Croats, have bickered over how to divide funds donated for the recovery. Many Bosnians believe the donations will disappear to corruption and cronyism. Meanwhile, Sadeta and others in her village live in tents, wondering when help will come.

When it rains it pours

"The floods are, once again, evidence of institutional failure of government in Bosnia," said Jasmin Mujanovic, a visiting scholar at the Harriman Institute at Columbia University who studies Bosnia. He notes that volunteers and civic organizations sprang into action to help those affected by the landslides and floods in the days and weeks after the disaster. "But at some point people realized that the government should be doing this," he said. In coming weeks, "I think we'll start to see more and more anger about the total lack of response by government institutions."

The floods devastated parts of northeast Bosnia - one fifth of the country was flooded, and one fourth of the country's population was affected, according to the state government's Deputy Security Minister Mladen Cavar. Around 100,000 buildings were damaged or destroyed, including 700 houses belonging to refugees from the civil war nearly two decades ago. More than 55,000 people were initially displaced by the disaster, said Cavar, and thousands are still without a home. Twenty-one people were killed and two are still considered missing, he said. 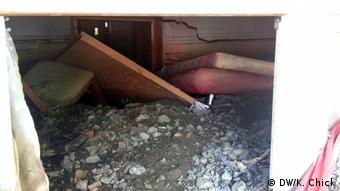 The government has been slow to respond

That would be a devastating disaster in almost any country. But in Bosnia, a disjointed and decentralized state structure means gaps in responses and plenty of opportunities to pass the blame. Officials in the Republika Serpska waited one week before asking for help from the state government, a delay that caused increased injury, says Cavar.

In Zepce, where Sadeta and her neighbors from Zeljezno Polje protested outside the mayor's office, deputy mayor Brigita Lovric dismissed the protesters gathered outside with a condescending smile. "One third of Bosnia and Herzegovina is affected by floods and landslides, and people aren't protesting anywhere else," she said. "My mother's house was flooded and my mother is not here protesting."

She says the municipality has already done what it could, by sending machinery to clear roads blocked by landslides and flood debris and restoring electricity in most towns. There was little more the local government could do, she said, and it's now waiting on the Federation government to pass a law providing for the recovery effort. "There will be some kind of solution for these people, but they must be calm and patient," said Lovric.

Cavar says the government organized the removal of 100 tons of dead animal carcasses, that 700 tons of food has been distributed, and that shelters have been set up for the displaced. He said the government would rebuild the homes that were destroyed before winter - an easier promise to utter than to fulfill. A donors conference for Bosnia and Serbia to be hosted in Brussels by the European Commission this month will mobilize more funds for recovery.

"We know that people after more than a month want to get back to their lives, they want to get their houses back," said Cavar. "We're doing our best to redirect the budget to rebuild these houses. … but we assume it will take years to recover from this." 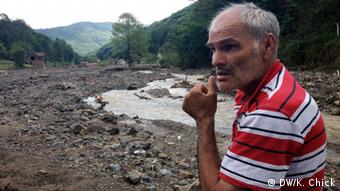 Waiting for a miracle?

But the residents of Zeljezno Polje are tired of being patient. The torrent of mud that now fills the valley and covers dozens of houses also covers many of the raspberry plants on which the residents made their living. Elvir Asceric, 39, whose forearms are covered with scratches from harvesting the berries, is camped next to his parents' home. The house was two levels, but now only the roof rises above the mud. His parents are hospitalized, and he's not sure how to begin rebuilding. "We can't do anything. We're just waiting for the response from the government," he said.

Sadeta's brother Asmer Tutnjic, 31, says he met with the mayor to plead for help. "He said he's not powerful enough to make a solution," said Tutnjic. "But what the municipality should do is find a safe place for us to live to get us out of the tent. What will we do when winter comes?"

Those in the village who live on the hillside instead of in the valley were luckier. But officials have warned many of them that even their homes may not be safe, because geologists fear the ground underneath may give way in more landslides. Town residents say people panic every time it rains, afraid their homes will crumble beneath them. Many speak about leaving the village for good, fearing they can no longer feel safe there.

Tutnjic and his family believe that if they had been connected politically, they would have received help already. "I know we are a very complicated country," said Tutnjic as his elderly mother leaned on his arm. "But the only thing we ask at this moment is that they deal with us as human beings, who should have a decent life. So many days have passed and nothing has been done. It's not just about money, it's about safety. It's about a local hand of friendship."