In its 28 years of existence, the left-wing militant Red Army Faction group murdered 34 people. Below is a chronology of the group's terrorist activities. 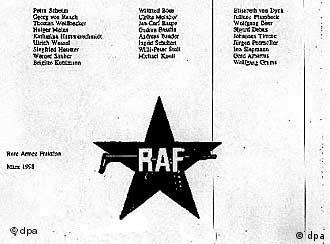 The infamous star under which the RAF took 34 lives

June 5, 1970: A Berlin publication calls for the establishment of the Red Army Faction with the words "Let the armed resistance begin."

May 11, 1972: Bomb attack on US barracks in Frankfurt leaves one person dead and 13 injured.

May 15, 1972: Bomb attack on the car of Federal Judge Wolfgang Buddenberg. His wife, who was driving the car, is injured.

May 19, 1972: Bomb attack on Axel Springer Publishing in Hamburg. Seventeen are wounded.

May 24, 1972: One bomb attack outside an officers club in Heidelberg followed moments later by a second blast in front of the Army Security Agency, US Army in Europe at Campbell Barracks. Three people are killed, five injured.

April 24, 1975: Occupation of the West German embassy in Stockholm. Four people are killed, two of them RAF members.

April 7, 1977: Assassination of Federal Prosecutor General Siegfried Buback. The driver and another passenger are also killed.

July 30, 1977: The director of Dresdner Bank, Jürgen Ponto, is shot in his home during an attempted kidnapping.

September 5, 1977: Chairman of the German Employers' Federation, Hanns Martin Schleyer, is kidnapped. Three police officers and the driver are killed during the kidnapping.

October 13, 1977: A Lufthansa aircraft is hijacked and 87 people taken hostage. The hijacking is ended by German commandos on October 18. 86 hostages are freed alive. The captain of the aircraft had already been killed. Three hijackers are killed.

October 18, 1977: Three RAF leaders, Baader, Ensslin and Raspe commit suicide in prison. Hanns Martin Schleyer is shot in response to the news of the suicides.

August 31, 1981: Large car bomb explodes in the parking lot of Ramstein air base in Germany.

December 18, 1984: Unsuccessful attempt to bomb a school for NATO officers.

August 8, 1985: Car bomb in the parking lot across from the base commander's building at the Rhein-Main air base near Frankfurt. Two people are killed in the blast and a further man was kidnapped and killed the night before for his military ID card.

November 30, 1989: The head of Deutsche Bank, Alfred Herrhausen, is killed in a bomb blast in Bad Homburg. The case remains unsolved.

April 1, 1991: Detlev Karsten Rohwedder, head of the Treuhandanstalt is shot in his house in Düsseldorf

March 27, 1993: Bomb attacks at the construction site of a new prison. No injuries but much of the building is destroyed.

June 27, 1993: Shoot-out following the attacks on the prison site. One RAF member and one GSG-9 officer are killed.

Over 30 years after a high-profile trial against leading Red Army Faction (RAF) members, two journalists, digging around in German archives, have discovered rare recordings of their testimony. (31.07.2007)

Officials in the German state of Baden-Württemberg are planning to tear down the section of the infamous Stammheim prison where the leaders of the RAF terrorist group where held and killed themselves during the 1970s. (02.08.2007)

German authorities said Wednesday they were reopening the investigation into the murder of a federal prosecutor by the militant Red Army Faction (RAF) 30 years ago. (25.04.2007)