Learn a funny, quirky German word each week with DW's Word of the Week feature. This week: Radler. 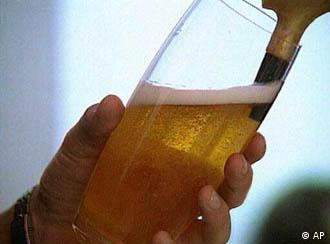 In a German beer garden on a hot and sunny day, seated under a canopy of chestnut trees, gravel crunching underfoot, many people are likely to order a "Radler." What they are served looks just like an ordinary glass of beer - but what it really is, right here in the land of the beer purity law, is a 50-50 mix of beer and Sprite. Diluted, refreshing, slightly sweet, with less alcohol - it's a favorite among those who have to drive home after their beer garden outing and among those who find pure beer too bitter. Considering Germany's strong reputation as a nation of beer enthusiasts, outsiders may be quite shocked to learn of the "Radler" - which may just make it Germany's best-kept secret. "Radler" has another meaning too, which - with a little imagination - isn't that far-fetched. It is a nickname for a cyclist and one can just imagine how the drinkable "Radler" just might have been invented one hot summer day after a long strenuous bike tour.