Radical ′Pravy Sektor′ group shifts Kyiv protests to the right | Europe| News and current affairs from around the continent | DW | 11.02.2014

For many activists in Kyiv, there's no longer any hope of finding a political solution with President Yanukovych. Some are now looking for help from the right - even if they don't share its ideology. 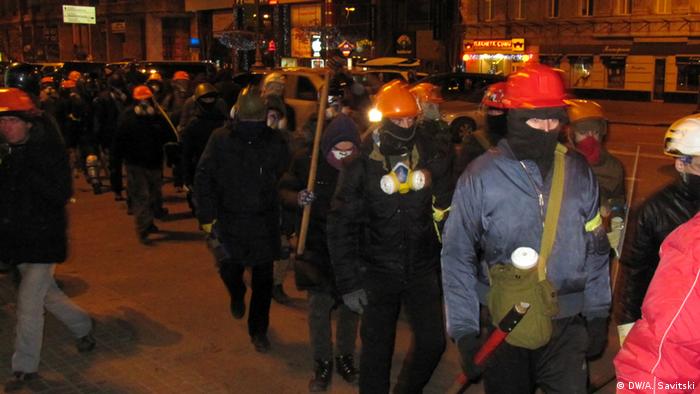 Men in balaclavas huddle around a rusty iron stove to warm themselves. They're sitting outside the barricades at Kiev's Independence Square, known locally as Maidan, which for weeks has been occupied by anti-government protesters. It's one o'clock in the morning, and the place is deserted. Now it's safe for them to talk.

Only a few trusted individuals know they belong to the right-wing Pravy Sektor, or "Right Sector". The group shies away from public attention. Since the government classified their movement as extremist, they could face a jail term of up to 15 years.

Action at any cost

One of the men dares to take off his mask. He is young, around 30 years old. His eyes look weary, but his words are determined. "I am here because I've run out of patience," he explains. "I don't have a job. My brother's company, where I used to work, was just taken by representatives of the Yanukovych clan. My brother has a small child and he stays at home. But I'm here, I'm not afraid to die."

The young man, who comes from the southern Ukrainian city of Berdyansk, doesn't want anything to do with the far-right ideology of Pravy Sektor. The ideologues behind the ultra-nationalist movement embrace an ethno-centric worldview. They reject closer ties to the EU, as well as any links to Russia, and are against pluralism in politics, democracy, and liberal values. The current Ukrainian government argues the group is "against the people." 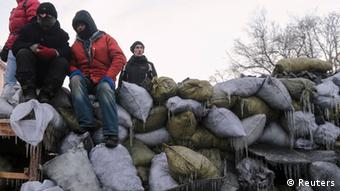 But none of this matters to the activist from Berdyansk. For him, actions are what really count. "I'm not just going to stand there for months while peaceful anti-government protesters are arrested, kidnapped and tortured," he said. "I want to fight this unjust regime, whatever it takes." His masked comrades nod. They are also there because the right "are the only ones who really want to fight against this corrupt regime."

Pravy Sektor now has some 500 members. This alliance of ultra-nationalist organizations emerged about two months ago following a violent crackdown on peaceful demonstrations against President Viktor Yanukovych. The group hasn't wasted any time. Members are given military training, gas masks and batons. Combatants also learn how to make Molotov cocktails.

A shift to the far right 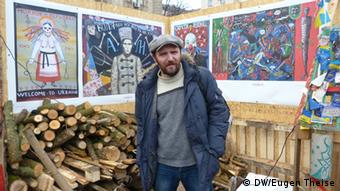 They're not the only ones getting riled up. Other activists in Independence Square are also embracing a headstrong approach. "I'm also a 'radical' now," said artist Andriy Ermolenko in an interview with DW. The activist has his mask on hand, as he always does, in case things get violent.

"For months we - the artists, the students, entrepreneurs - have been demonstrating peacefully against this government. But they don't listen to us. The last straw was when we were branded as radicals or extremists. Well, then maybe we are. We're going to keep fighting against these rulers who've deceived us."

Ermolenko doesn't have much faith in the negotiations between the parliamentary opposition and the president to form an interim government. "We won't leave Maidan, even if the opposition makes a deal with President. If we go, it'll be because we're going to jail," he said. The protest movement must stick together, he added, because the president is waging a war against the people.

For the artist, members of Pravy Sektor are indispensable allies in the war, no matter their ideological differences.

Not about Europe anymore 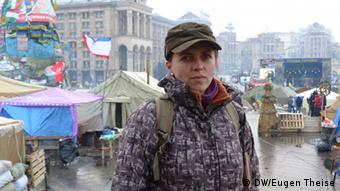 Olha Hodowanez: "I'm here to fight for my life"

The massive show of force the government used against protesters in recent weeks seems to have shifted the mindset of many Ukrainians. "I'm not here for Europe, or against Russia, I'm here to fight for my life," film producer Olha Hodowanez told DW. "The people in power who're killing us need to go."

The far-right ideas espoused by some opposition elements doesn't both her. "This regime turns us all into radicals," she said. "The guys from Pravy Sektor protect us from attacks by the security forces. That's what counts."

The film producer says she's taken up the cause at Independence Square for those who have been injured in the clashes. Many protesters are scared of being taken to the hospital, only to be arrested there by the police.

So Hodowanez is looking for local families who are willing to take injured activists into their homes for a few weeks. Like many others at Independence Square, she dreams of a new beginning in Ukraine without Yanokovych. Above all else, the activist is demanding that corrupt judges, prosecutors and police officers step down.

The longer the negotiations between the opposition and the president drag on, the more likely a new wave of violence, Hodowanez argues. Over the weekend, the leaders of Pravy Sektor suspended the ceasefire and called for a new blockade of the government district. This came in response to the government ignoring their demand to release arrested activists.

"We will fight," say the combatants from the right-wing group.

The fact that Ukraine's security forces are now officially allowed to use firearms isn't likely to stop them.

The situation in the Ukrainian capital is set to escalate. After a brief reprieve, barricades are burning once again. Earlier, talks between the government and the opposition have failed. (24.01.2014)

Standoff in Kyiv after key talks

Ukraine's opposition has issued an ultimatum to President Viktor Yanukovych. The warning follows a day of heavy clashes in the capital Kyiv that left multiple activists dead and prompted international condemnation. (23.01.2014)