Children across Europe eagerly await the arrival of St. Nicholas on December 6. But in Holland, the tradition has racist implications that the Dutch aren't quite willing to give up. 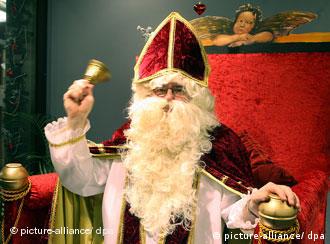 St. Nicholas brings treats to kids in many European countries on December 6

For the Dutch, Sinterklaasavond (St. Nicholas Eve) on December 5 is the biggest celebration of the year - bigger than Christmas. That evening, families gather and exchange presents, and children leave out their shoes in the hopes that Sinterklaas will have fill them with candy by the next morning.

What seems like a harmless holiday devoted to gifts, candy, and children, has a catch: Sinterklaas' helpers, the Zwarte Pieten or "Black Peters," are portrayed according to degrading racial stereotypes.

They're typically dressed in 19th-century Moorish outfits, curly Afro wigs, and painted red lips. It is common for both adults and children to dress up as Zwarte Piet, complete with their faces painted black.

"Zwarte Piet is a person who is happy, who is the assistant of St. Nicholas, the first person who has contact with children and speaks with children," said Bert Jansen, a schoolteacher in Rotterdam who has organized the Rotterdam Sinterklaas parade for 10 years and also walks in the parade as the chief Zwarte Piet.

Indeed, nowadays the Zwarte Pieten are friendly characters that are clever and mischievous, and adored by children. Yet in the original Sinterklaas story, the Zwarte Pieten were slaves. Gradually, the tale evolved and they became Sinterklaas' helpers, but they were portrayed as being stupid and spoke broken Dutch with a Surinamese accent. They were also frightening figures: It was their job to punish misbehaved children by beating them. 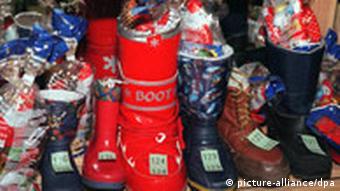 Zwarte Piet help bring sweets to kids that have been good

In an effort to tone down any racist implication, the story now says Zwarte Piet is black because they're covered in chimney soot. However, some say that explanation is unconvincing.

"That just doesn't work for someone who is a grown-up. Where did the Afro come from?" commented Ama van Dantzig, a resident of Amsterdam whose mother is Ghanian and father Dutch.

The proposal to eliminate Zwarte Piet from the celebration altogether has arisen from time to time, but not yet taken hold.

"Personally, I think it is an invented tradition and Sinterklaas can stay, but the Zwarte Pieten have to go," said Artwell Cain, director of the National Institute for the Study of Dutch Slavery and its Legacy (NiNsee). "It is an affront to people of the African Diaspora in the Netherlands, and it is not proper in this age."

The question is even more urgent today as the Netherlands is focusing more on integration efforts and the right-wing Party For Freedom - led by controversial figure Geert Wilders - is the third largest party in the Parliament.

At a time when there is pressure for minorities to integrate into Dutch society, a tradition like Zwarte Piet sends the wrong message, Cain said.

"If you are developing this sense of belonging and then this tradition of Zwarte Piet is running around, it diminishes your confidence in what you are as a Dutch person," Cain said. "You become something like an ambiguous citizen. You question yourself: 'Why do I have to enjoy this? Why do I have to be confronted openly with this form of racism?'"

Others see Zwarte Piet as an essential Dutch tradition that is enjoyed by all children and families, regardless of race or ethnic background.

"Everyone is happy about Zwarte Piet, and if you are from Holland or you come from Morocco or Somalia, every child puts his shoe by the door or chimney in the hope that Zwarte Piet puts a present in his shoe; everyone does it," said Peter Boelhouwer, an event organizer who has managed the Sinterklaas parade in The Hague for the past 10 years.

Although celebrations around Sinterklaas date back to the 16th century, they were usually spontaneous, wild celebrations in the street, said John Helsloot, a researcher at the Meertens Institute who specializes in Sinterklaas traditions. The current story of Sinterklaas and Zwarte Piet dates back to 1850, when Jan Schenkman, a schoolteacher from Amsterdam, published an illustrated children's book that introduced many elements of the Sinterklaas story that caught on, including the Zwarte Pieten.

The book was quite popular among the bourgeois and there was a readiness to adopt the festival, Helsloot said. From there, it slowly evolved into the celebration that exists today.

It's not uncommon for St. Nicholas figures to have a devilish companion - such a figure exists in both Austrian and Swiss traditions - but the Netherlands is the only place where he is imagined as a black man. It is difficult to say why this particular story emerged here, but Helsloot suggested that it could be tied to the Dutch abolishment of slavery in 1863.

"You can see that racism was stronger even after the abolishment of slavery," Helsloot said. "Zwarte Piet was part of this general idea of foreign people, black people as frightening, and that people should be punished by frightening figures." 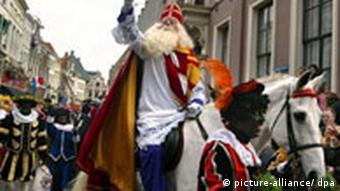 The Zwarte Pieten are seen as Sinterklaas' helpers

If lasting changes are to be made to the Zwarte Pieten, it seems they will have to be organic rather than imposed by a political organization. In 2006, The Dutch Programme Foundation encouraged people to paint their faces with rainbow colors, but the effort failed and the next year the usual Zwarte Piet black face returned.

Though that's not to say change isn't possible.

"With more and more people like me who become Dutch and don't find it necessary that the Zwarte Pieten stay black, it can change, but slowly," said Sueli Brodin, a resident of Maastricht who is Japanese-French and has lived in The Netherlands for 19 years. "It has to happen naturally because society is changing."

Helsloot also could see a future where children smear their faces with black ink rather than paint their whole faces black to lose the racial association and show instead that Zwarte Piet is actually covered in chimney soot.

Still others say Zwarte Piet must be taken out of the tradition completely.

"I think it can happen, but it is completely tied to the question of racism in general and how we are conscious about how racism affects the whole of society," said Max van Lingen, a representative of the International Socialists who works on anti-racism campaigns. "This is not something that will happen within the next five years; it really is a long battle."

Van Dantzig is not as optimistic. "The people around me are highly educated, internationally-oriented people and the Dutch in that group don't understand the big deal with Zwarte Piet, and they are the future change makers if you ask me," she said. "They are very protective of Zwarte Piet and it will be difficult to change it."

From music and art to film and dance - find out what's going on in Germany's cultural scene. Deutsche Welle has compiled a list of this month's highlights. (25.11.2010)

In the small town of Engelskirchen, thousands of letters from around the world arrive at a seasonal Christmas post office, all addressed to one person. For over 20 years, postal workers have written back. (24.12.2009)