Despite constitutional guarantees of religious freedom, a German court has banned the Church of the Flying Spaghetti Monster from hanging up official notices. Chief Pastafarian, Brother Spaghettus, has vowed to fight on. 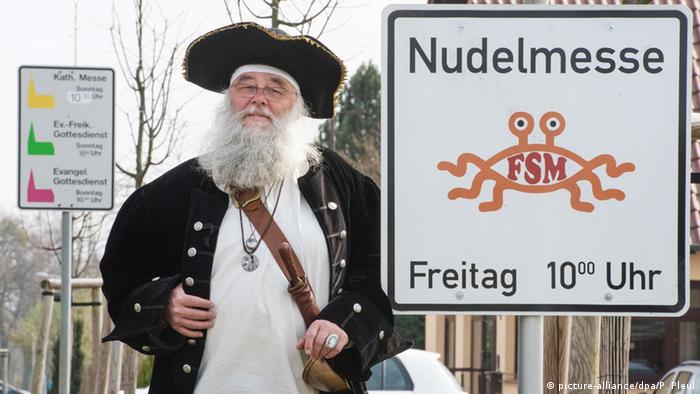 Brother Spaghettus had a bad day on Wednesday. A court in the eastern city of Frankfurt an der Oder announced that his religion, the Church of the Flying Spaghetti Monster, had no right to hang official signs at the entrances to the town of Templin, Brandenburg, giving information about their weekly services, next to those of the local Catholic and Protestant churches.

"The suit has been denied," Judge Sabine Selbig said in court. "It does not depend on whether the organization is a world-view community or not."

The judge ruled that the government of the state of Brandenburg had legitimately overruled a verbal agreement to allow the four signs, which Brother Spaghettus, aka Rüdiger Weida, chairman of the religious society, had made with Templin mayor Detlef Tabbert in December 2014. 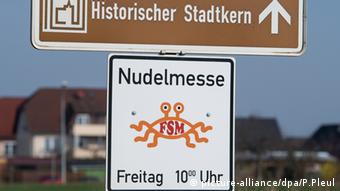 The Church of the Flying Spaghetti Monster existed in secret for hundreds of years, it claims

Weida was defiant after the ruling was announced on Wednesday. "We completely expected this verdict," he told DW. "The next step is we're going to take it to a higher state court."

Weida, who answers all questions with scrupulous earnestness, was disappointed with the way the court treated the case. "Our impression was that the judge was not in the slightest interested in engaging with the substance of the case, and dismissed it merely as a formality," he said. "And she was completely wrong, and that's why we see good chances for our appeal."

Weida also said his church intended to sue the local road authority for "attempted collusion" in the trial for making false claims about the church.

For the Brandenburg Infrastructure Ministry, on the other hand, the case is straightforward. "The question was whether the group is a religious group or not," spokesman Steffen Streu told DW. "As far as the road signs are concerned, there are clear rules - a recognized religious community is allowed to do that."

A pastafarian couple in New Zealand has become the first to "tie the noodly knot" in a legally recognized ceremony officiated by an ordained "ministeroni" from the Church of the Flying Spaghetti Monster. (16.04.2016)

A new survey shows that a majority of young Arabs disavows the "Islamic State"militant group. But a key factor to 'IS' recruitment continues to plague the region. DW examines the survey's findings and what lies beneath. (12.04.2016)

Weida was offended by the implicit discrimination in this point of view. "For us these signs are simply to be taken for granted," he said. "We are just as serious as every other religion, and we want to be able to articulate ourselves just as seriously. We consider it completely unreasonable that other views of the world in Germany get special privileges. If someone has privileges, it always means that someone else is discriminated against."

The Flying Spaghetti Monster was born in Kansas, in the US, in 2005, when "concerned citizen" Bobby Henderson wrote an open letter to the state's school board after it decided that "intelligent design" should be taught as an alternative theory to evolution on the school curriculum.

Henderson argued that it wasn't fair to only allow schools to teach just one creationist theory, and claimed that he, and "many others around the world," believed that a Flying Spaghetti Monster had created the universe. 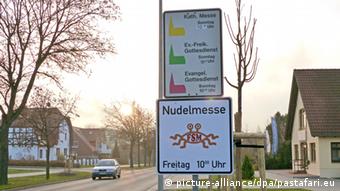 Churches are allowed to hang up official notices in Germany

The letter went on to briefly explain the theory, and claim that the Flying Spaghetti Monster manipulated any scientific evidence that appeared to contradict it with "His Noodly Appendage."

By 2006, the Flying Spaghetti Monster was not in Kansas anymore. Churches were formed all over the world, including the only German one in Templin, where the chief Pastafarian Minister, Rüdiger Weida, leads a "noodle mass" for his congregation of five people every Friday ("Our god was faster than other gods, and he finished with the creation of the Earth earlier, and that's why we have to rest on Friday already. We consider it a kind of discrimination that we have to work on Friday and that our children have to go to school," he said).

The services are similar to those of the Catholic church. They begin with a joint profession of faith, sing hymns, and take communion. "But our communion does not consist of flesh and blood, but from noodles from His noodly appendages and beer from His beer volcano," said Weida.

The church also has relics, including a pirate flag, but that is not the most important.

"Our most holy relic is a multiple miracle - it's a closed bottle of white rum that someone brought to our pirate meeting," explained Weida. "There we simply forgot to drink it - that was the first miracle, that a bottle of rum stayed closed among pirates, the second miracle was that a pirate brought it to the next meeting, and the third miracle was that it wasn't drunk then either. After that we saw that it was a sign that this bottle must never again be opened."