Seismologists say that this type of shifting is to be expected for an earthquake this large. In addition, scientists are pouring over a large new cache of quake sensor data from the March 11 tremblor. 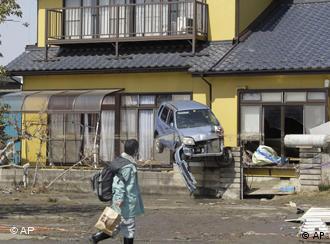 Northeastern Japan was struck by an 8.9 quake on Friday

Over the weekend, seismologists around the world concluded that the March 11 earthquake in Japan has had a significant physical impact on the Earth.

Scientists say that the impact was so great that it moved Japan's main island, Honshu, 2.4 meters to the east, and shifted the earth on its rotational axis by almost 10 centimeters.

"Of a magnitude nine [earthquake], you would expect these values," Andreas Reitbrock, a professor of seismology at the University of Liverpool in the United Kingdom, told Deutsche Welle.

However, other scientists were a little bit more cautious at this stage.

"The displacement directly at the fault was about 15 meters, derived from seismic records," wrote Rainer Kind, a seismologist at the Helmholtz Research Centre for Geosciences in Potsdam, in an e-mail to Deutsche Welle.

"There are many GPS stations in Japan, which also measure displacement. However these data are not yet published. I suppose that the two meters displacement apply for the north-east coast of Honshu, not all of Honshu. The displacements vary certainly across Honshu, [two meters] for all of Honshu seems very much, we must wait for the GPS data."

According to Antonio Piersanti, the director of the Italy's National Institute of Geophysics and Volcanology, the quake in Japan had a greater impact on the Earth's rotational axis than the 9.1 Indonesia quake from 2004, and was second only to the massive 1960 quake in Chile.

Meanwhile, Richard Gross, a scientist at the NASA Jet Propulsion Laboratory in California, determined that the length of a single day had now been shortened by 1.8 millionths of a second.

Experts noted that previous earthquakes had a similar impact on the Earth's axis and the length of the day. The 2010 earthquake in Chile shortened the day by 1.26 millionths of a second and moved the figure axis by nearly eight centimeters. 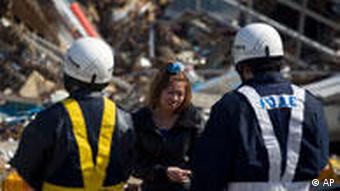 Japan is still reeling from the quake's damage

Seismologists noted that much of the new physical detail about the Japan quake is available to scientists due to an extensive network of sensors that were placed around Japan after the 1995 tremblor in the city of Kobe.

"It gives us, for the first time, the possibility to model in great detail what happened during the rupture of an earthquake," Reitbrock said, noting that "99 percent" of global seismological data is shared on publicy accessible websites.

"You have a big rupture plane there, about 300 or 400 kilometers long and about 80 kilometers wide," he added. "And that rupture is not in one go all at the same time. You have that rupture propogating along this interface, and we have to find out where it actually happens, how does it accelerate, decelerate, and what is actually going on at this interface. And formally we didn't have the data for doing it."

At a conference held Saturday at the California Institute of Technology in Pasedena, just outside of Los Angeles, American seismologists concurred with this assessment.

"The Japanese have the best seismic information in the world," said Lucy Jones, chief scientist for the Multi-Hazards project at the U.S. Geological Survey, according to the Los Angeles Times. "This is overwhelmingly the best-recorded great earthquake ever."

Germany has sent aid workers Japan, where they hope to rescue people trapped beneath rubble. The workers face various obstacles, including potential radiation, but volunteers have worked in similar danger zones before. (13.03.2011)

The quake in the Filipino island of Mindanao was initially measured at magnitude 6.0. Earlier, an earthquake measuring 5.3 jolted northeastern Japan.

Tremors have been felt in Egypt, Turkey and Greece following the magnitude 6.0 quake. There are no immediate reports of casualties.

Authorities said there were no irregularities at any nuclear facilities after the 7.3 magnitude earthquake hit Fukushima Prefecture.