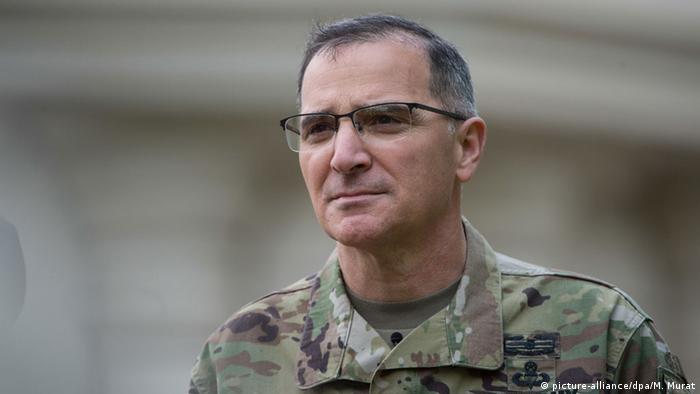 NATO's top commander in Europe, Curtis Scaparrotti (pictured), like all high-level alliance officials, would prefer not to discuss publicly what's going on in Turkey.  His civilian counterpart, Secretary General Jens Stoltenberg, continually diverts to discussion of the value of Turkey as an ally, a critical buffer zone, when asked about the fate of the hundreds of NATO officers ordered home, many arrested, under suspicion of having helped launch the July coup. Stoltenberg regularly reiterates that Turkish President Recep Tayyip Erdogan has pledged to respect the rule of law in prosecuting the coup-plotters, which the secretary general underscores is the government's right.

So it was significant when the Supreme Allied Commander Europe (SACEUR) admitted to a small group of journalists, this reporter included, that he didn't suspect any of the 150 officers purged from allied military operations - halving the number of Turkish staff - had been involved in the overthrow attempt. On the contrary, the general explained, "I had talented, capable people here and I'm taking a degradation on my staff for the skill, the expertise and the work that they produced."

As a sign of how little it takes to be cast as a coup-plotter, that assessment earned the general a huge headline in a Turkish newspaper, accusing him of supporting the followers of Fethullah Gulen, named as an anti-government "terrorist" and instigator of the coup.

Scaparrotti finally put on the record what's been whispered in the NATO halls for months by military staff, explaining the effect Erdogan's actions are having on alliance's capabilities. "I wouldn't say it was 'serious' but I would say it's 'noticeable,'" he acknowledged, as it's mostly lieutenant colonels, colonels and flag-rank officers who've been suspended or fired and summarily ordered to return to Ankara, as reported by DW earlier this week. "Those are ones that have spent a career now and have a great deal of experience," he said. "I think it will take some time for them to overcome that," as the Turkish government sends in replacements with far less experience than their purged predecessors. Scaparrotti says Turkey has asked for American assistance in that effort - as many of those dismissed were either educated or trained in the US - and he says that's under consideration.

Scaparrotti echoed Stoltenberg, however, in saying he'd been reassured by Turkish officials about the well-being of those recalled officers, most of whom are in hiding, some seeking asylum in Belgium, Germany and the US, after seeing those who went home thrown in jail. "I have concerns," he said, "but those have been allayed by the constant conversations that I have had with their chief of defense, General [Hulusi] Akar," with whom he speaks almost weekly.  "He's been very direct in his commitment to NATO and they've been good about fulfilling those commitments," especially when it comes to replenishing the number of officers, which is still down about a quarter from before the coup.

Pressed on the humanitarian angle, Scaparrotti says he's conveyed to Akar that he has concerns "about what happened the people who were working for us... about the care for them and their families as well." Scaparrotti says Akar reassured him that his intent was to "personally look into their welfare" after their returns.

But purged officers now in hiding scoff at Akar's statements, pointing out that their colleagues who did follow orders to return were thrown in jail on charges kept secret, as reported by DW earlier this week. At least one NATO officer who was not even on the weekly purge lists was summoned to Ankara for a "meeting" under false pretenses and arrested on government premises.  It's been more than six weeks and he has not yet been allowed to contact his wife and children in Brussels.

While mildly encouraged that Scaparrotti openly questioned the validity of accusations against them, one officer in hiding was deeply disappointed that support has gone no further than that. "[Turkish military chief of staff] Akar's assurance that those returning will be treated well does not mean anything," he said. "This is a good story SACEUR has made himself believe for a good night's sleep.  Akar cannot protect even himself. Once they are done with his services regarding this coup he will be thrown away like garbage or [sent] to jail."

What the officer would like NATO to do for them is to encourage allied governments to offer them and their families asylum and to allow them to apply for jobs back at NATO that don't require top-secret security clearances, which were stripped by Erdogan along with their diplomatic status. 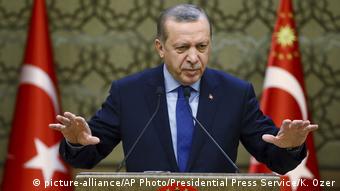 Scaparrotti should also be aware the decimation of his Turkish staff isn't over, the officers say. They get the lists of new names through the grapevine that are sent to the Turkish military delegation at NATO weekly, usually late on Fridays.

One of those whose name just came up for dismissal referred to the commander's comments in a farewell letter sent to colleagues at NATO's military headquarters SHAPE on Thursday, shared with DW.

The man derided suggestions of involvement with the coup or any connection to what his government calls "terrorist organizations".  "I reject this accusation with violence and hatred," he said, noting Scaparrotti's Wednesday comments supporting their innocence.

His letter says he and his colleagues "as experienced, highly-trained Western-minded officials cannot easily be replaced, especially not when competence is no longer the selection criteria in Turkey but complete loyalty to an increasingly erratic and dangerous regime back home." And he urged NATO - "supposed to be the alliance of the free world" - to take a stand on injustices inside its own organization as well as on the battlefield.

Otherwise, the officer wrote, "all trust is lost." It's not clear how much is left even now.

A court in Athens has agreed to extradite three of the eight servicemen who fled Turkey for Greece after the failed July coup. On Monday, the court had rejected Turkey's extradition request for three others. (06.12.2016)

Opinion: NATO is betraying its principles

The alliance needs to take a clear and forceful stand against what the Erdogan regime is doing, not only in Turkey, but also inside NATO, writes Max Hofmann. (06.12.2016)

Finnish President Niinisto says Turkey has agreed to support Finland and Sweden joining the NATO military alliance. Turkey says it "got what it wanted" after weeks of threatening to veto accession.

The talks represent the latest attempt to work past the roadblock Ankara has put up over Sweden and Finland joining the military alliance.