Last summer, three Palestinians committed an arson attack on a synagogue in Wuppertal. Their trial is nearing its end, but the wounds within the Jewish community here remain. DW's Sven Pöhle went to the synagogue. 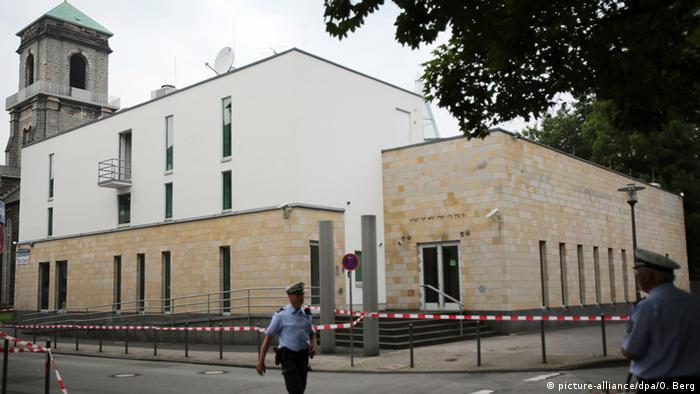 "It was right here," Leonid Goldberg says, standing at the entrance of a sandstone synagogue in Wuppertal's Barmen district. "This is exactly where the fire started, where the objects were thrown." In his mid-50s and wearing a gray suit, Goldberg, the chairman of Wuppertal's Jewish cultural association, nods to security sitting behind glass at the entrance.

In the middle of the night on July 29, 2014, Goldberg was contacted by a private security firm: Three men had thrown bottles full of diesel at the synagogue. "Thank God that nothing more can be seen of the attack," Goldberg says as he scratches his beard. The flames extinguished quickly, so the damage was manageable. "Following the attack, we had police here round the clock. Now, they are only here during the night."

Goldberg points to security cameras positioned left and right of the entrance and explains that all Jewish places of worship in Germany are well-secured. The front entrance is almost never used - only for big events. "When that is the case, security personnel are here." The security guard behind the glass waves us through. He must wait until the front doors are closed before allowing us entrance into the synagogue.

After we're inside, Goldberg points to the windows - bulletproof from the outside, shatterproof on the inside. A connecting door leads to a cafe, kosher, says Goldberg, and public. Once inside the cafe, there is no handle on the door. You need a key to access the synagogue.

We sit down at a large table in the back, and Goldberg lights a cigarette. Conversation can be heard emanating from the cafe's main room as a handful of people sit at the tables. A radio plays music, barely audible. 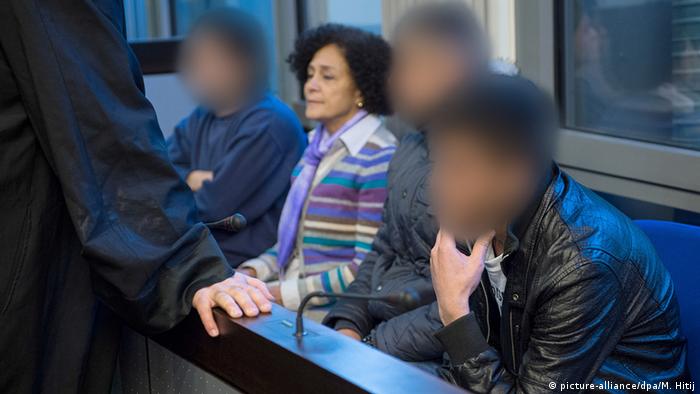 The defendants in the arson trial: Mohamad E. (left), Ismail A. (middle) und Mohammad A. (right) with their interpreter

What did it feel like to witness the first day of the arson trial, on January 14? Goldberg shakes his head. He was present as the three suspects, from the West Bank, confessed and expressed remorse for what they had done. They explained they had committed their crime under the influence of alcohol, following a celebration at the end of Ramadan. They wanted to use the bottles of diesel to direct interest to what was going on in Gaza at the time, the Israeli offensive. They said they weren't aware that by throwing them they could burn the synagogue or injure other people.

"That is just an excuse," Goldberg claimed, with furrowed brow. "If you ask me, it was pure anti-Semitism." There was enough public interest in the Israeli offensive in Gaza last summer, he went on. "There were more than enough signals last July. All demonstrations were against Israel - and not just against Israel, against Jews." Goldberg scratches his beard and sighs. "It was just a matter of time," he laments, "that this atmosphere would produce attacks against a Jewish house of worship."

Although the facade has long been cleaned by a team of specialists, the fire has left traces within Wuppertal's Jewish community - just like the assault on the kosher supermarket in connection with the Paris terror attacks at the beginning of January did, Goldberg says. "These fears are real. But they've been around for years, much longer than since the Paris attacks."

Open enmity against Jewish people existed in German and European cities before both the Wuppertal arson and the Paris supermarket attacks, Goldberg says, noting that several thousand Jews left France for Israel last year alone. In his community, however, not a single member has left the country, he says. That doesn't mean, however, that nobody has entertained the idea. 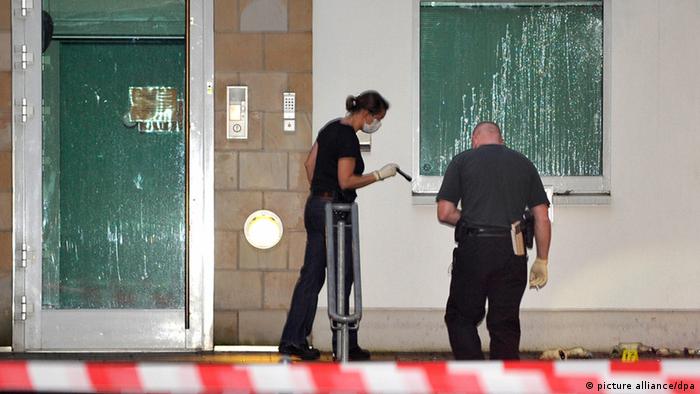 Following the investigation, special cleaning crews did away with all the traces of the Wuppertal attack

Many community members have expressed concern for their own security because they are Jewish. "For years now, our rabbis haven't worn their kippahs in public as they go through Wuppertal," Goldberg says. "Jews that do wear their kippah in public attempt to hide it by wearing a hat on top so that they don't have to hear insults from young Muslims, most of all."

Why young Muslims? With a slightly annoyed voice, Goldberg claims their upbringing is to blame, as well as Turkish and Arab media. He says young Muslims have constant access to anti-Israeli and anti-Semitic coverage. As a result, anti-Semitism among young Muslims has grown strongly.

Is the Shariah police evidence of this? Last autumn, news traveled around the world that Muslim men right there in Wuppertal were patrolling the streets, attempting to prohibit the public consumption of alcohol and stop people from gambling. Goldberg laughs, referring to the self-proclaimed patrollers as ridiculous. "Can you imagine a kosher police?"

German Cabinet joins demonstration to speak out against anti-Semitism

Germany's Jewish community has gathered to protest anti-Semitism. Chancellor Merkel's cabinet is also there to speak out against the hatred, recently reignited when Israel launched an offensive on the Gaza Strip. (14.09.2014)

'Germany must take on a multiethnic identity'