Puppets enchant in historical opera | Europe| News and current affairs from around the continent | DW | 11.03.2014

A traditional Italian puppet company and a German historical instrumental ensemble have collaborated to stage Handel's Rinaldo. Though the production revives Baroque traditions, it is wowing today's audiences. 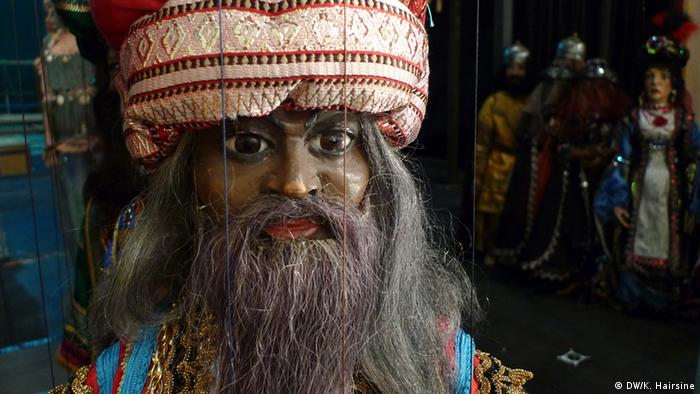 Backstage at the Baden State Theater in Karlsruhe, puppeteers and technicians bustle back and forth as they set up for the evening's performance. Tonight's show is Rinaldo, an 18th century opera by the German composer George Frideric Handel, who is probably best known for his oratorio the Messiah.

The puppeteers are from Carlo Colla and Sons, a world-renowned Italian puppet company that has been staging performances of classical tales and plays for more than 200 years.

Puppeteer Piero Corbella climbs up onto the two-meter high scaffolding spanning the stage. This evening he'll be standing on the bridge with his colleagues manipulating the wooden marionettes on the stage below via strings attached to a wooden cross. 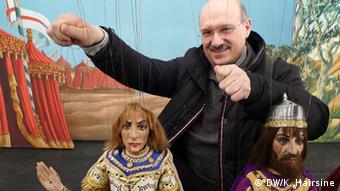 Hand-made and hand-painted with real hair and hand-sewn costumes, the carved marionettes are absolutely stunning. The ones used in the production of the Rinaldo opera are all new. But they were created in the traditional manner, says Corbella, so they can be used in future productions with the other 3,000 marionettes, 8,000 costumes and innumerable elements of scenery the company keeps in its vast storerooms on the outskirts of Milan.

"We have old material and new material and maybe we'll need to use them on the stage at the same moment, which is why it's important to use the same techniques and materials as 200 years ago," Corbella says, picking up the wooden cross attached to the character of Rinaldo and expertly moving the hand of the puppet hero to its heart.

While the secondary characters have only six strings, the main characters in the production have up to 25 strings. That way, explains Corbella, they can carry out complicated movements such as placing their hand on their brow in a tragic gesture or moving their mouths to mimic the singing.

Having this range of movement is important in order to capture the historical traditions of Baroque theater, which is based on stylized, emotional gestures.

Bringing opera to the people

In the 18th and 19th centuries, it was common practice for puppet companies such as Carlo Colla to tour with musicians and singers and perform operas. As Corbella puts it, back then "not everyone could afford to go to Milan and see the big operas in La Scala, but they could go and see the same opera made with the marionettes." The German Lautten Compagney play on historical instruments like this harpsichord

Carlo Colla still stage marionette operas today - Verdi, Mozart and Haydn are just some of the composers in their repertoire - but use recorded rather than live music. That is why Eugenio Colla - the fifth generation of the Colla family to run the marionette company - says this particular production of Handel's Rinaldo is "very exciting" for the puppeteers.

"With a live performance, the musicians respond to the warmth of the audience and can change pace," he explains in his soft, Milanese-accented Italian.

"The singers also have a certain musical freedom when they break into their warbling solos and so it is a splendid experience to follow the movements of these exquisite voices with the marionettes."

Down in the orchestra pit, musicians unpack their instruments and start warming up for the rehearsal. They are from the Lautten Compagney - a renowned German instrumental ensemble which specializes in playing Baroque music such as Handel on historical instruments.

Conductor Wolfgang Katschner was instrumental in setting up the co-production between the Lautten Compagney and the marionette theater. He believes the collaboration has resulted in a "very unique piece of theater."

"We are combining historical music with a special kind of historical theater - which results in something very magical and beautiful," Katschner says. "The marionettes act out the libretto [the opera text] in a very naive, simple manner to magical effect."

After watching tiny puppet birds alight delicately on a marionette's hand, mermaids dive through rolling seas painted glowingly on paper, and a sorceress dismount from a fire-breathing, two-headed dragon with a thrashing tail, the audience indeed seem enchanted with the unusual performance. 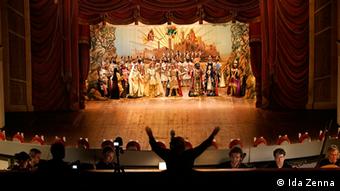 "It is beautiful, just marvelous," says one woman during the interval, while another commented on the production's beauty and artistry. An elderly gentleman visiting the opera with his wife is delighted with the way the combination of puppet theater and historical instruments reflects "how Baroque music and the theater worked back then."

This return to Baroque heritage is no doubt part of the reason for the popularity of the production of Handel's Rinaldo.

This is the third year the two companies have performed Rinaldo together at festivals across Europe - and they are currently planning the production of another Handel opera. It seems this blend of Italian puppetry tradition and German musical heritage will continue to wow audiences for some time yet.

88 percent of all Germans view classical music as being a key part of their cultural heritage. But only one in five actually go to such concerts. Experts say organizers need to find new ways to reach out to listeners. (31.01.2014)