The biggest public sector strike to hit Germany in 14 years escalated after talks broke down between unions and local authorities in a southwestern state and services union Verdi warned of a long-drawn out conflict. 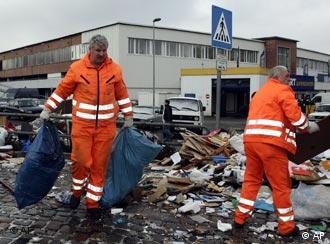 Hopes for a quick nationwide settlement were shattered as the giant services union Verdi broke off negotiations late on Wednesday in Baden-Württemberg, one of nine states where public services strikes have been going on for weeks.

Verdi rejected an offer by local authority employers of a 39.7 hour working week. Speaking in Stuttgart, Verdi's Alfred Wohlfart said there was no way the deal could have worked.

"The gentlemen have entrenched themselves, they have put their ideological goals before the goal of giving people a perspective," Wohlfart said. He urged the populace to understand the reasons behind the crippling strikes, saying Verdi was battling against moves by employers that would further worsen mass unemployment. 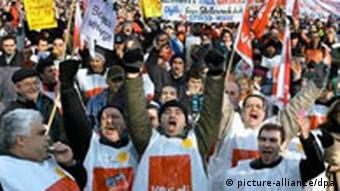 The strikes have met an overwhelming response among public sector employees

The strikes, which began in early February this year, have been over employers' plans to extend the working week from 38.5 hours to 40 hours without any additional pay and against proposals to cut Christmas bonuses in half.

Trade unions fear this will lead to further job cuts. Verdi is demanding 38.8 hours for the 220,000-strong workforce.

The strike is the first major one in the sector for 14 years and the unions have warned they have sufficient funds to sustain a long, drawn-out conflict. Verdi estimates that around 24,000 employees had joined the walkouts so far.

About 4.7 million people are employed in Germany's public sector.

On Thursday however the employers' side indicated they might up the stakes in the dispute by considering privatization of services.

"Naturally one of the consequences would be, that there will be more privatization," Hartmut Möllring, the chairman of the Wage Negotiating Committee of the Federal States and a conservative politician, said in a radio interview. "That's not a threat, rather a fact."

Möllring, who is also the finance minister in the state of Lower Saxony, said the population would realize that privatization would mean that the garbage would be collected and kindergartens would remain open.

The wave of strikes have in particular affected local administration, hospitals, kindergartens and garbage services in Europe's largest economy, with rubbish left piling up in the streets in some places.

Verdi has now vowed to step up its action in Baden-Württemberg, with longer and wider work stoppages. It has called upon 9,000 to 10,000 employees to join walkouts on Thursday. 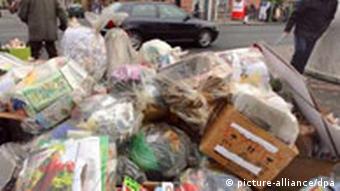 Scenes such as these have become commonplace in some cities

The move spells further bad news for the state's residents who are already grappling with mountains of piled up rubbish on the streets and making alternative arrangements to care for their kids after the kindergartens have remained shut for weeks.

The negotiator for the local authority employers' side, Gerhard Widder, called it a black day for the public services sector, saying the strikes were conducted at the expense of the people's needs.

"The result is that the people in our cities will have to continue to endure the strike," Widder said.

However, in the northern city of Hamburg, a compromise was found under a complicated formula depending on the pay grade, age and family situation of the respective employees.

"You will see that we have created the working hour plan with three elements, and all of these elements have a social character," he said.

Under the accord, the average working week would be increased to 39 hours -- but not for everyone. While young single and well paid employees may have to work 40 hours, older employees or those with young children may in fact find that their working week is even reduced.

But, the deal is unlikely to serve as a model for other federal states.

Elsewhere in Germany, employees in the northern city of Bremen joined the strike for the first time with 1,000 workers in 70 kindergartens not showing up for work.

Civil servants in the southwestern state of Baden-Württemberg went on strike on Monday, protesting longer working hours. It is the first widespread public-sector strike in 14 years and threatens to grow larger. (Feb. 6, 2006)