Leaders of Nicaragua's opposition party have called the parliament to condemn what they described as police violence at a protest on Wednesday. At least nine people were arrested. 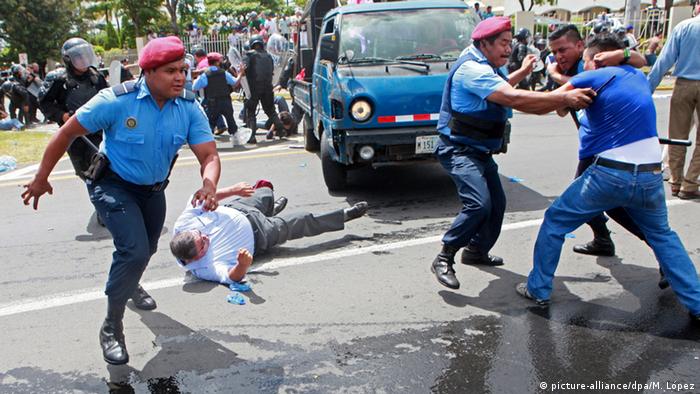 Clashes broke out between police and protestors on Wednesday evening in downtown Managua, Nicaragua during a weekly protest against the ruling Sandinista National Liberation Front to demand fair elections rules. Police beat and detained protestors and harassed journalists covering the event.

"This is repression. I am exercising my right to protest," Augusto Valle, a PLI legislator, told local media. Valle sustained a blow to the face and also claimed police took his cellphone and beat his legs and stomach.

Nicaraguan representatives in the Central American Parliament also called on the Parliament to condemn the clashes and ask for free elections in 2016, saying the Nicaraguan National Police repressed the protests "without regards to citizens, legislators and politicians who have organized every Wednesday in from of the building" of the Supreme Electoral Council.

A History of Fraud

The protests stem from accusations that the Sandinista party and Nicaraguan President Daniel Ortega skewed the 2008 and 2011 elections in their favor. Demonstrators have been gathering every week in front of the headquarters of the Supreme Electoral Council in the center of Managua, the country’s capital.

The National Police have not yet commented on the clashes.

The next national elections in Nicaragua are scheduled for November 2016. Nicaragua is expected to elect a president, vice president, 90 national Members of Parliament and 20 representatives to the Central American Parliament.

Nicaraguan police have used tear gas and rubber bullets to break up protesters opposed to a forthcoming $50 billion shipping canal. The government plans to expropriate land for the Chinese-built project. (24.12.2014)

Nicaragua's canal project is intended to lift the country to greatness. But for this, paradoxically, President Daniel Ortega is prepared to surrender a degree of national sovereignty. The project also has many critics. (22.12.2014)